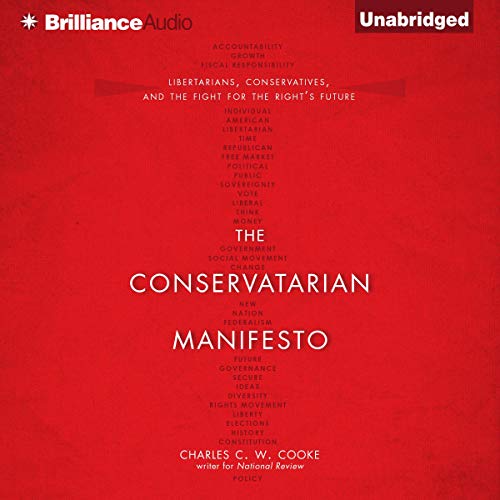 There is an underserved movement budding among young conservatives in which fiscal responsibility and controlled government spending remain crucial tenets, but issues like gay marriage and drug control are approached with a libertarian bent.

The ideas of this growing wave need a public, nuanced voice. The implications for the Republican Party if this philosophy is more widely adopted may not only spur major change within the party but could also revitalize its chances of claiming more power in our government.

Author Charles Cooke has coined the term conservatarian for this group, and The Conservatarian Manifesto is his explanation of what defines this new breed of Republican, what they believe on every hot-button issue of our day, and how they can effect change within the GOP. This audiobook is a blueprint of action and ideology for the growing population of socially liberal, fiscally conservative young members of the political right.

What listeners say about The Conservatarian Manifesto

Great resource for a better understanding of Conservatives

I really liked this book. I especially liked the author’s understanding of the Hispanic community and his opinions about how the Republican Party should approach it. The only downside is that it’s a little dated since it’s been a few years already. I would love to hear an updated version which takes into account Trump, Me Too, etc.

I have been identifying myself as a "Conservatarian" for quite some time now. I have been advocating for this ideological merge to hopefully merge conservatives and libertarians under the GOP tent... and oust RINOs.... I have seen first hand that this is a growing trend in the Republican party.. the younger people seem to be naturally "Conservatarian"... I believe this will be the future GOP ideology..

Fantastic. Truly a work of rational and intellectual art. I only hope I can get my friends and family to listen. What slogan or campaign can we adopt to get the masses to willingly open up and listen? They may not agree in the end, but this book will certainly make anyone review unemotionally and think again. Bravo!

Great book. Unique perspective from a foreign born man, who's changed his young views on a host of issues to formulate a coherent political philosophy.

Charlie is very consistent in his application of the ideals that drive him. He makes excellent arguments for his stances and brings data to back it up. Makes the case for staying the course and remaining principled. Loved the book.

Charles challenges the hypocrisy of some conservative viewpoints while also explaining the core principles of conservatism.

a must listen, especially during this election cycle. gave me hope for the future!! I plan to give this to people for Christmas. thanks, Charles!!

Cooke does a fantastic job of articulating the views of those who aren't in favor of progressivism or those in favor of theocracy. It's a libertarian viewpoint without the sort of "crazy" that gives hardened libertarians a bad name. Couldn't recommend this book more highly.

I thoroughly enjoyed this book and mr. cook does well in explaining the views of conservatives and Libertarians and the mesh of the two together. also how he backs up his views with actual real world examples.