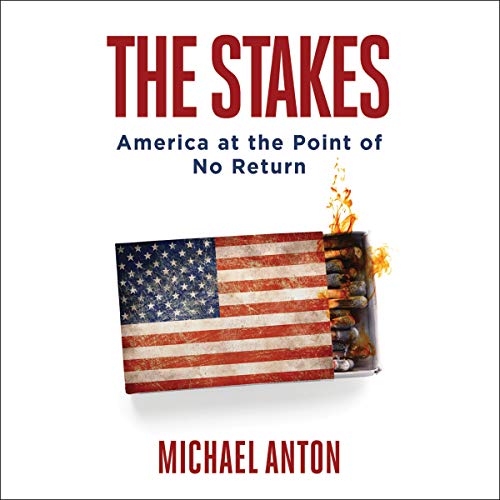 Two months before the 2016 presidential election, an anonymously published essay titled The Flight 93 Election rallied conservatives to charge the cockpit by voting for Trump. Michael Anton, the author of that controversial viral essay, now says that the last few years have only served to prove his Flight 93 thesis: The left has become more aggressive, more vindictive, and more dangerous - and the stakes have never been higher.

To reframe the upcoming 2020 election, Anton looks at California: a state that has descended from a middle-class paradise into crumbling, crowded chaos under unchallenged Democrat rule. Where California goes, so goes the United States of America, Anton argues - unless conservatives take a stand.

What listeners say about The Stakes

America, this is your future

This book was better than I expected. Narrated VERY well. Anton says in advance he’s sorry for some in part shallow coverage on certain topics. I found myself looking for more in this already stuffed book on Americas current and potential future endeavors. I hardly review audiobooks. This is a must listen if you breathe air in America.

There is so much in this book that I can't even begin to unpack. It is so well written and I feel is a must read for every American no matter your political stripe. Michael Anton is scholar whose voices are becoming extinct.

In today's environment EVERYTHING is political. If you hang a flag in front of your house, you are called a racist bigot. The media is so unbalanced that it's hard to know what is going on and no one just gives you facts without spin or opinion so you can think for yourself. There is no longer a middle ground, no neutral. As of this writing (Mid October 2020) we are watching censorship of the right by big tech in real time. This book is trying to wake people up and maybe shake people up to get them to understand just how far we have been allowed to crumble and offer a path to helping right our ship before it sinks completely. My regret is that I did not buy it sooner so that I could recommend it to friends and family before they cast their vote. I won't stop trying though.

The only minor complaint I have is with the Narrator. He is obviously not a native Californian based on his pronunciation of Marin, Sepulveda, and a couple of others that had me cringing. I have seen Michael Anton in interviews and in the movie The Plot Against The President and he has a fine voice. I would have loved to hear him read his own book.

I recently signed on to group called White Allies out of Unity Church, in San Diego, virtually, on how to become an “anti racist”. Everything they had us read or listen to was VERY left. I suggested we needed to look at what the right is saying. I was squelched. We have one more session and you can bet that I will recommend this book!
Thank you for your hours spent on putting this book together and getting it published. Bob Peterson

a detailed red-pilling of how high the stakes are

listened to all 16 hours. Anton goes well beyond Ben Shapiro's "How to destroy America in 3 easy steps". TBC

Tells one exactly what is going on and what needs to be done to save the country.

Only You Can Decide-The Stakes Are High

This is an excellent book! I only wish that EVERYONE would read it! Truly an eye-opener.

very informative, great book everyone should read! share this book and keep passing it on.

Michael Anton didn’t only explain what is going on right now but he explained how we can help make it better too. Be active for the good of our great Country

Essential reading for Americans. The most valid criticism of our current state of affairs yet published.