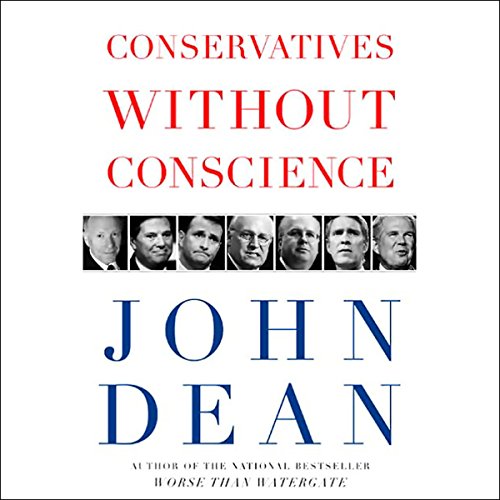 In Conservatives Without Conscience, Dean not only highlights specific right-wing-driven GOP policies but also probes the conservative mind-set, identifying recurring qualities such as the unbridled viciousness toward those daring to disagree with them, as well as the big business favoritism that costs taxpayers billions. Dean identifies specific examples of how court packing is seeking to form a judiciary that is activist by its very nature, how religious piety is producing politics run amok, and how concealed indifference to the founding principles of liberty and equality is pushing America further and further from its constitutional foundations.

By the end, Dean paints a vivid picture of what's happening at the top levels of the Republican Party, a noble political party corrupted by its current leaders who cloak their actions in moral superiority while packaging their programs as blatant propaganda. Dean, certainly no alarmist, finds disturbing signs that current right-wing authoritarian thinking, when conflated with the dominating personalities of the conservative leadership could take the United States toward its own version of fascism.

"A penetrating and highly disturbing portrait of many of the major players in Republican politics and power...riveting." (Booklist, starred review)

"A fierce indictment of Republican politicians...the sheer outrage in Dean's book has power of its own." (Chicago Tribune)

What listeners say about Conservatives Without Conscience

John Dean must have a crystal ball!

John Dean must have a crystal ball! Great background to what we are living through now

A Book Every American Should Read

John Dean has put together not only a very well written factual history of the rise of authoritarian conservatism in American but he pulls from excellent phychological profiling to add another demension to this book. As someone who had personally had substanial political contact with some of the players at the forefront of this movement mentioned in the book, as well as those who have opposed it, I can say that when my personal knowledge overlaps with Dean's commentary and factual assertions, they are 100% accurate. I couldn't put the book down and found myself continually replaying certain sections because of the wealth of knowledge Dean present.

Say what you will, but if Barry Goldwater had a problem with the current strain of Conservatism then something is terribly wrong.

Dean found himself the target of slander campaign run by his old Watergate friends including born-again Christian, Chuck Colson. He started this book, along with Goldwater, to find out why Conservativism has taken on take-no-prisoners approach capable of blinding its adherents to, if not morality, then simple consistency of thought. How do Conservatives let Bill Bennett of the hook for a gambling problem or give Rush Limbaugh a pass on his drug abuse while dragging Max Clealand's patriotism through the mud?

Dean's a wonderful writer and Robertson Dean reads wonderfully. I've found myself sitting in driveways and parking lots far too frequently while listening to this. It might even get me back to the gym.

Constitutional Democracy is at stake

John Dean, as a former Goldwater Republican, cannot be easily dismissed as a "loon" or "Republican hating". What he describes in this interesting, well written and researched book is the far right wing of conservatism that has taken over most of the power of all branches of the United States government at this time. These people are not "conservatives" as they have been known in the past.

Dean's book also explains how in a democracy a tiny minority can amass enormous power one would expect would arise from a super majority of the people. Dean alerts the reader to the true danger that lurks in the current regime's psychological and philosophical makeup. Nothing less than Constitutional Democracy is at stake.

John Dean does a great job of exposing why Presidents (and other leaders) do not and can not LISTEN! By far, the best explaination of authoritarianism I have ever read. He really lays it out and he should know, after working for Nixon. Great read, especially if you wonder why Presidents of countries, corporations, etc. have a zero ability to listen and learn. They are watching mouths move, but nothing will ever sink in because of their authoritarian mental structure. I highly recommend it. Very well written.

When Personality and Power Collide

Dean's thesis is that many of the Republicans currently in power are authoritarian personalities with a lust for power. The former concept needs some explanation; an authoritarian personality (Adorno, et. al. 1950) is one who is enamored with convention and the authority, questioning neither and relying on punitive controls during times of crisis. Authoritarians reject the unusual and believe that difficult times support the suspension of rights. They are especially susceptible to rigid thinking in their concern with appearing powerful.

Dean pretty much gets it, spot on. He argues convincingly that Bush's great flaw is his personality characterized by a rigid world view and unthinking hubris leads him to impulsive decisions. More compelling than his analysis of Bush is his critique of Cheney's influence and how he would rather direct events from behind the scenes because this secrecy is instrumental in maintaining power. Such intellectual rigidity, sold to the public as necessities during a time of fear-sustaining national crisis, has lead the Cheney/Bush team to such intellectually bankrupt positions as threatening a veto of a defense appropriations measure because it carried McCain's anti-torture resolution, an action that would have denied the Defense Department without the funds needed for the war in Afghanistan. For Bush/Cheney, winning is more important that defending the laws of the United States, a conclusion well-supported by the 800 or so signing statements that collectively declare “We reserve the right to disregard legislative intent.”

Rest assured, this is a frightening read for those who are concerned about the direction the United States' executive branch, aided by a complicit Congress, has gone the past six years. Dean's book should stir those on the left and right to wrest back their government from those for whom power is more critical than principle or conscience. Highly recommended.

how the White House is hijacked by right wing conservative Christian fundamentalists with the smug conviction that their attitudes and beliefs are all that matter. Hijacked? Maybe not, maybe the correct idea is that the president as sold the executive branch to this movement. I used to think this president was just a dope, but now I think maybe he's just an astute salesman- he knew he could not prevail by right of his own (lack of) accomplishments, so he figured out how to pander to this smarmy bunch who could deliver him votes.

I bought this with a most sincere desire to ‘understand the thought process of the modern day liberal.’ I perceive John Dean as honest and forthright, so surely he’d be able to provide some insight.

On and on it went, endless babbling, countless inconsistencies, rambling with bitter accusations and unnecessary character assassinations… all with an absence of point. Yet, I kept listening, hoping for enlightenment, finding myself mumbling “Where are you going with this?” “What is your point?” “Give me a punch line!” Between the endless babbling and countless inconsistencies, I can attest that it never arrived.

John Dean's very fine book on the authoritarian conservative tradition is, despite its title, an excellent primer on contemporary American politics in general. Other writers, whose books are available from Audible, have noted that, at one time or another, both Democrats and Republicans have been the bad boys of Congress. LBJ stole, among other things, the 1948 Texas Senate election from Coke Stevenson (LBJ: Master of the Senate by Robert Caro). JFK was a randy, immoral, secretive executive willing to use the Mafia to topple Fidel Castro (Robert Kennedy: His Life by Evan Thomas). Nixon used the CIA to oust Salvador Allende from his elected presidency of Chile (Nixon and Kissinger by Robert Dallek) . It goes on and on. Amoral authoritarian behavior is not just Republican. It's the core of a life of political power.

Dean presents page after page of armchair soci
ological babble to prove that nearly all Republicans are arrogant, unthinking morons who just live to screw the little guy. Save yourself $20, just scream "I hate Republicans" one hundred times. You'll feel better and save $20.

I found this book to be a bore. I think there is an entire chapter criticizing conservatives because they cannot define themselves in a concise manner. Who cares? I was hoping for a thoughtful perspective that would make me think. What I found was a book full of petty, partisan name-calling and sweeping generalizations. Skip this one.