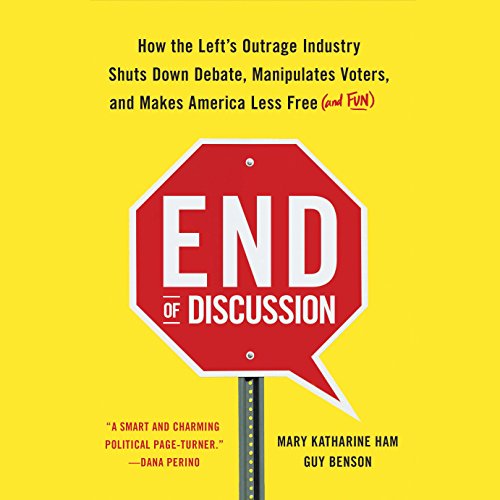 They want to shut you up. But don't let this be the End of Discussion.

In this fresh and provocative new audiobook, Mary Katharine Ham and Guy Benson, dynamic Fox News and Townhall Media duo, expose how the Left exploits fake outrage to silence their political opponents - in public, on social media, at work, and even in their own homes. End of Discussion encourages all Americans who value the open exchange of ideas to fight back against this strategic effort to make America less free, less feisty, and less fun.

Ham and Benson demonstrate just how dangerous the outrage industry - a coalition of mostly liberal blowhards and busybodies - is to democracy. This media frenzy is designed to disqualify opposing viewpoints on everything from health care to infrastructure to education by labeling them racist, sexist, and evil. They punish speech that makes them uncomfortable, demanding boycotts, firings, regulations, and other economic costs for the sin of disagreeing with them. Instead of engaging in discussion, they seek to win the debate by preventing it from happening.

With Ham and Benson's help, listeners can cut through the noise and find their voices again, fighting back against the rampant self-censorship and hair-trigger apologies that always make things worse, not better. With fresh reporting and insightful, occasionally tongue-in-cheek, analysis, End of Discussion is a timely handbook for anyone who wants to make sure debate doesn't meet an ugly death....

What listeners say about End of Discussion

Where does End of Discussion rank among all the audiobooks you’ve listened to so far?

This is a good book, but it is clearly ABRIDGED!

What was one of the most memorable moments of End of Discussion?

I went back and listened three times because they referenced an earlier statement that I never heard. Did a bit of research and found that I didn't miss it...it was not included in the Audible version! That is supremely disappointing. I would not have purchased an abridged version. It is clearly being advertised as "unabridged" - it is not!

I loved the book, but was extremely disappointed that it was falsely advertised as "unabridged" when it clearly was missing pages and pages of text.

Superb and even handed, not preachy or prone to inane moralizing. Recommended highly for left and right!

Not half as good as other books on the subject

The subject is definitely a serious issue that is in need of discussion. Increasing intolerance with free speech, freedom of thought and willingness to engage in educated debate is a serious problem that should be seriously addressed. The examples they use are certainly scary instances of the end of discussion. Instead of treating the growing silencing of free speech in an educated fashion this book is full of shameless self promotion and poor attempts at humor. The book comes off as preachy and self serving.

The back and forth narration is a bit distracting. They are times when you can hear Mary Katherine Ham stifling her laughter at her own poorly constructed attempts at jokes, humor or false modesty.

There are other books such as The Silencing by Kirsten Powers or Muzzled by Juan Williams that address the topic in a much more intelligent fashion.

While this book felt like a ridiculous waste of time, I still support the authors' right to voice their opinions (no matter how poorly they're expressed).

Get this book....end of discussion!

From fever swamp lefties to hard right hicks and everyone in between, this book is for (or about) you. Listen, think, & enjoy. Live and let live. Chill the hell out.

Great book!!! Especially as it (as equally as possible) calls out both sides of the left-right cultural/social divide

The Tao of Joan

Ham and Benson give an excellent account of the many ways the outraged (mostly left, sometimes right) have attempted to suppress discussion and destroy humor in recent years. They describe some heroes who have fought back and won, and honor comedians like Joan Rivers who give the bowdlerizers a happy middle finger, or like Adam Carolla who make a living on their own terms. Their advice is sound, if not always easy to follow. Read this book for a reminder of what American values are supposed to be.

While the writers discuss the "End of Discussion" in part throughout the book, most of it is devoted simply to their conservative ideology. They've lost sight of the forest by being too close to the trees. There's nothing new here, just rehashed anecdotes of past news stories. No insights, no thought to the implications of the ending of discussion, no thoughts to turning the issue around.

This rating really should be higher because my main gripe is primarily out of the authors’ control which is that the examples provided as hot takes and controversial current events are mostly irrelevant listening ~10 years later (‘23).

So I acknowledge that’s on me for picking a culture war book a decade past its publishing date.

Overall sound, logical arguments and quippy readers / voiceovers by the two authors though.

Solid points were made

I saw Ms. Hamm on Bill Maher's show, even a liberal like me can enjoy!