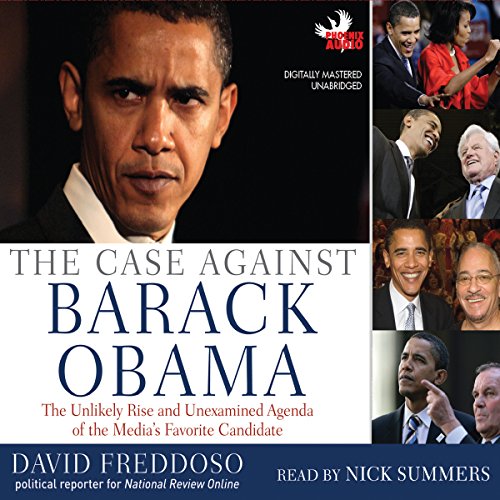 The Case Against Barack Obama

By: David Freddoso
Narrated by: Nick Summers
Try for £0.00

He's the media's darling, an inspiration to many, and the answer to everything from healthcare to taxes. He is Barack Obama - the silver-tongued senator with a phrase for everything and a promise for everyone. Sound too good to be true? That's what David Freddoso, investigative reporter and National Review Online columnist, examines in The Case Against Barack Obama.

In this shocking expose, Freddoso explores the reality behind the rhetoric, the plans behind the promises, and the faults the facade, revealing:

What listeners say about The Case Against Barack Obama

I was convinced, by the end of this obamaganda, that Obama is, in fact, not a candidate of change but just the same old stuff. Anyone who believes otherwise is easily swayed by good oration. (And its usually really good).

I was not, however, entirely convinced that he wouldn't make a decent president.

In the end, he is grossly under experienced to be the president of the US (as his foreign policy comments imply among other things) so I would probably pull the lever for McCain. We will see...

This guy works a little too hard to be 'fair' to Obama. The material he presents, fairly meticulously, doesn't require him to make nice as much as he does. Obama's career history is pretty clear. It all suggests a very canny policital animal and one who is dedicated to the status quo. The 'change' mantra, if not hype, is a brand new theme in his life.

The author does a great job of taking Barack Obama's voting record, speeches, and books Barack has written to show what Barack believes about the issues in this election. The issues that you never hear as he campaigns. It helped me clarify who he is and how important this election is.

Great book but a too sarcatic sounding reader

The book content was good and provided a lot of information I wish was known to more people before it is too late. My only problem is that the reader had a very sarcastic voice that for me distracted from the facts.

Why no one should be surprised!

The true nature and agenda of President Obama is slowly emerging as his agenda unfolds. But it was all there IF ANYONE (other than Mr. Freddoso, can we say "the Media?") had bothered to wonder what he was doing/learning for 20 years between leaving the most radical wing of the Harvard Law School (who's OBJECTIVE is to figure ways to radically re-write the interpretation of the Constitution without having to go to all the trouble of actually amending it!) and his emergence on the national political scene. That is, mastering the tactics of left-wing Chicago politics with its unique mix of ruthless legal/political maneuvering (voting "present") in concert with literal mob intimidation when needed (ala ACORN and blue-collar union brownshirts). Now its too late but at least you will better understand why the man says all the "right" things, while DOING the exact opposite with his policies.

More honest than I expected

This book did a lot to change my opinion of Obama. I see him now as being a bit more honest in some areas, and even more calculated in others. The real audience for this book should be people who love or hate him. This book will... or should make you take another look at your opinions. Needless to say, I wish he wasn't President.

At times was repetitive, which wasn't a problem for me as it helped reinforce topics introduced. Reveals much about Obama's early political career and anecdotes about the company he has kept along the way. Did not have time to 'fact check' but many of the allegations have been substantiated during election campaign months.