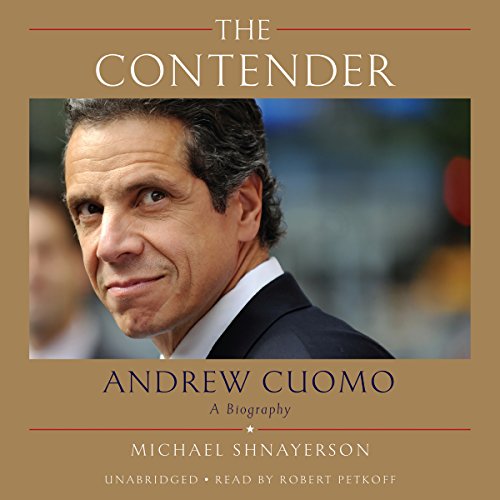 By: Michael Shnayerson
Narrated by: Robert Petkoff
Try for £0.00

Andrew Cuomo is the protagonist of an ongoing political saga that reads like a novel. In many ways his rise, fall, and rise again is an iconic story: a young American politician of vaunting ambition, aiming for nothing less than the presidency. Building on his father's political success, a first run for governor in 2002 led to a stinging defeat and a painful, public divorce from Kerry Kennedy, scion of another political dynasty. Cuomo had to come back from seeming political death and reinvent himself.

He did so brilliantly by becoming New York's attorney general and compiling a record that focused on public corruption. In winning the governorship in 2010, he promised to clean up America's most corrupt legislature. He is blunt and combative, the antithesis of the glad-handing, blow-dried senator or governor who tries to please one and all. He's also proven he can make his legislature work, alternately charming and arm twisting his colleagues with a talent for political strategy reminiscent of President Lyndon Johnson. Political pundits tend to agree that for Cuomo, a run for the White House is not a question of whether but when.

What listeners say about The Contender

Lived in NYC for 8 years - never knew my governor

Fantastic and comprehensive look at a man newly returned to the national spotlight due to the COVID crisis. If he ever does run for POTUS, I will know far more about who he is than I might have. Surprised the book didn't do better commercially.