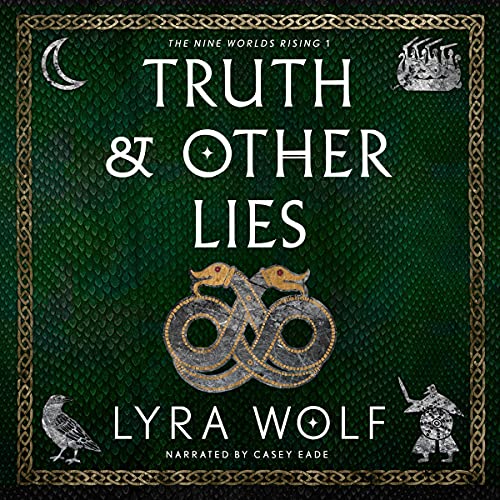 Truth and Other Lies: A Loki Norse Fantasy (The Nine Worlds Rising Book 1)

Nothing is trickier than the truth. All Loki the trickster god of Asgard wants is a peaceful life where he's free to stir up a bit of harmless mischief. But when he's struck by a painful vision of blood, ash, and death he knows his fun has run out. Refusing to have his life obliterated by some stuffy prophecy, Loki feels he must save Asgard. Except the gods stand in his way. They don't trust the God of Lies, which means his only hope is to return to Odin, the man he wished to forget thanks to their complicated history.

When Loki meets a mortal woman, his plans hit a snag. Sigyn is delightfully stubborn and quick with a blade. She also, inexplicably, possesses a divine element found only in a god. As Loki falls deeply in love with her, he never expects their bond to fulfill the prophecy threatening all their lives.

Forced between honoring his oath with Odin or protecting the woman he loves, Loki will discover that the only thing crueler than truth are the lies behind it all. And the truth changes everything.

What listeners say about Truth and Other Lies: A Loki Norse Fantasy (The Nine Worlds Rising Book 1)

A huge shout out to both Lyra Wolf and Casey Eade. I am a norse pagan and love to read the fictions of this beautiful mythology. I was hooked from the start and spellbound by the different accents by Casey...she really put her all into this book and it was a pleasure to listen to.
My only criticism is, I wish there had been more gods and goddesses involved, I would have loved to hear about Freya, Ran, Hel etc and experienced more of the 9 worlds to get lost in. But I loved the storyline and will certainly miss Loki!

I haven't read or listened to a book as good as this in a long time. Lyra Wolf really knows Loki and the insight into his mind was brilliant. The narrator is wonderfully skilled and I'm looking forward to the 2nd instalment in the series.

This was so well narrated!! The norse lore was well written and love how Loki was written in this~ can't wait to get more of this series here!!

This made me cry

made me cry and scream "no no no no please no!" as i hyperventilated. 10/10 would listen again.

An Epic Tale of Mischief and Woes

I loved this story so much!!!! The narration was superb with the vast array of voices. Loki's voice is my favorite and I could feel true emotion in his words. One of my new favorite stories that I have listened to on repeat. Truly a masterpiece.

I really wanted to love this book. I loved the concept so much I pre-ordered as soon as I heard about it. First off, let me say that the narrator is phenomenal! I hope to see more narrations from them in the near future. They did a beautiful job bringing the characters to life and working with the material. The narrator is what made this book bearable. If I had read it myself I would not have made it through.

While the concept is absolutely brilliant and the author did an amazing job with the story as a whole, I feel like it was a struggle to get through. I had to actively force myself to follow along and work to stay engaged. This had nothing to do with the story itself, but rather with the sentence structure and being overly wordy where it wasn't necessary. For me a lot of places seemed unstructured and to drag on without adding any value or moving the reader forward. I believe this to be an issue of flow or perhaps editing rather than an issue with the author's writing as a whole.

I do believe there is limitless potential with this story however, and will be cautiously waiting for the second book. My hope is that after writing this one, the author will come into their own a little more and really find their stride. For now I wait, slightly dissatisfied, but still wanting more,

I am a Norse pagan and I love how Lyra Wolf took her own spin on the ancient story. I also adore the narrator, she has a tik tok and I follow her almost religiously. Overall I'd give this book an 11 out of 10.

I very rarely leave reviews but this audiobook merits one. This audiobook provides an absolutely brilliant take on Norse Mythology with our(my) favorite trickster god at the center of it all. It's not often I consume audiobooks as quickly as this one, but between the impeccable writing and the captivating narration...I just couldn't stop. Each character had their own beautiful voice that helped aid in my visualization of them and the scenes were set wonderfully. This will definitely be one I revisit.

Do you want a story that starts with Loki and Thor showing up at a wedding clad as ladies? Well, have I got news for you! I think like many people, I spent the past ten years with Tom Hiddleston's take on Loki in the various Marvel films. Thus, when I hear the name Loki, he is who I immediately default to. He really shaped Loki in to an unforgettable character with his own brand of charm, and I love that. So when I heard there was a whole book ripe with the charisma of Loki, I was there. Wolf truly captures Loki's voice and spirit, and he practically walks off the page. By that I mean Loki will do whatever he wants no matter what, but he's not a cruel, heartless god. He's just a bit chaotic. There are plenty of other characters breathing life into Truth and Other Lies including some we love to hate, and I mean truly hate. More than that Wolf really has Thor and Loki as classic Thor and Loki trading brotherly banter at every opportunity.

I cannot recommend this book enough!

Casey knocked it out of the park, not to mention the book itself being a masterpiece. Just make sure you have tissues with you wherever you listen 🥲

A Flipped Script and Crazy Ride

Loved this rake on Loki’s origin and madness. Very original take on the entire pantheon. This book is entertaining and addictive. Ready for book two.

Fabulous narration of a fantastic story!

Truth and Other Lies by Lyra Wolf is an amazing book and the audiobook narration, by Loki impersonator Casey Eade is wonderful! She brings a perfect sense of drama to the story through many disparate voices, bringing all of the characters to life with heart and plenty of emotion. Her Loki is the most amazing, however. His voice makes him sound languid and completely in control of the situation with an irreverant lust for life and all of its pleasures. The Trickster god has a shamefacedly brazen side to his nature and you can hear it dripping from his accent. When taken by anger his voice increases the tension terrifically. When talking normally, he has a wonderfully sing-song voice which is highly engaging.

Thor’s wedding to the king of the ice giants, Thrym, is a hilarious episode and the narration adds plenty of tension as Loki tries to pull the wool over Thrym’s eyes about Thor’s identity. He seems to really believe he is marrying Freya. Thor is presented as a hothead with a large ego and lacking a sense of humour. His no-nonsense voice somehow reflects this perfectly.

A softly spoken, persuasive Odin is a revelation. I didn’t expect him to sound like this but it works really well.

Sigyn is wholesome, innocent and girlish-sounding.

“Love is a funny thing,” she said. “It can harm, but it can heal. Give us pain, and give us joy. But what I’ve discovered is that no matter what, when love does make us fools, it also makes us better.”

The tension is also completely controlled by Casey as emphasis is placed on all the right words and her narration speeds up. She is the perfect narrator for this book.

For my full review of the story please visit the Amazon page: https://www.amazon.com/Truth-Other-Lies-Adventure-Chronicles-ebook/dp/B085ZQ5DJN