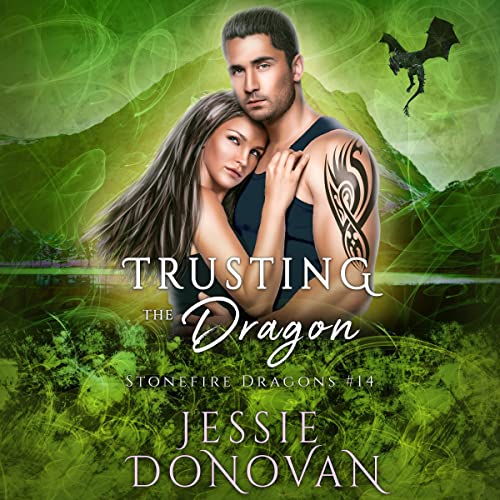 Nearly two years ago Hudson Wells came across a human female in need and helped to find her missing son. Sarah was the first female to make him feel anything since the death of his late mate. However, she was married and off limits. Then she shows up on Stonefire with her sons, to help with the latest children’s event, and he discovers not only that she’s divorced, she also needs his help again. Hudson jumps at the chance hoping he can win the hurt female and find his second chance.

Sarah MacKintosh Carter has finally found peace living with the Lochguard dragons. But then she receives news that unless she’s mated to a dragon-shifter in the next month, she’ll have to leave. As she tries to figure out what to do, she focuses on what might be the last dragon-human event for her sons and runs into the dragonman who helped her two years ago. He’s easy to talk to and soon she spills her troubles. When he offers to be her mate, she hesitates but realizes it’s the only way to keep her sons safe and away from their awful father.

While Sarah is determined to only have a marriage of convenience, Hudson wants more. And as he woos Sarah, she starts to wonder if she’s finally found a man she can trust. But then a battle to keep her children arrives, and her future becomes uncertain. Can she keep her sons and find happiness with Hudson? Or will she have to leave the only safety and happiness she’s known in her life to keep her children safe from their father?

Full-length book with a happy ending.

What listeners say about Trusting the Dragon

Hudson has a spicy side!🔥

Loved Sarah and Hudson's story when I read it and now even more that I got to listen to it.
Can two emotionally scarred people find love and a HEA? They can if it's a Stone fire (or Lochguard) dragon shifter story by Jessie Donovan.
Very poignant and VERY spicy, loved it!

Do not miss this one.

As always, the book was a great read and now with some passing time, the audio is just as good. The narrator did a great job. What American can resist an English accent? Certainly not me. That may be the reason I think if I had to choose my favorite format it would be audio for this particular book.

Human, Sarah, is finally finding a place for her sons and herself after her divorce from her abusive, beast of a husband (he is not a dragon either). Until--she is notified she can't live in the Dragon Clan unless she mates with a dragon in one month. Without the protection of the dragons, she is in danger of losing custody of her two boys to the parents of her ex--the same people who helped make him who he is today.

The clan leaders have a list of dragons willing to mate with her to save her and her boys. The dragon she met and was attracted to a couple of years previous is on the list. Could it possibly work?

Hudson was excited to see he would again meet with the human he'd been attracted to before. She was the first female to draw the man and dragon since his mate's death. If he could prove to her he was worthy to be with her family he'd have a chance to have a life and love for his dragon and himself. As he learned more about her past he knew it would take patience to have her. He knew there was a physical attraction, but with the kids, there was much more involved and at stake.

I'm a fanatic for the author. Many of the characters are familiar from other books even though a new reader will not need to know that. Her worldbuilding is amazing, the story engaging with enough intrigue to keep the reader listening. DO NOT MISS THIS ONE,