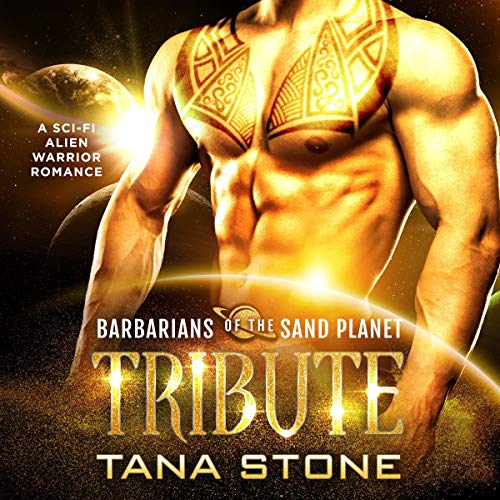 By: Tana Stone
Narrated by: Tristan Josiah,Sierra Grace
Try for £0.00

She gave herself to the aliens to save her friends. Now she’s pledged to be the Crestek warrior’s mate. But will the marriage of convenience become something more?

Volunteering herself as tribute to the aliens was the only way Holly could ensure the safety of the rest of her bounty hunter crew. Problem is now she’s locked in the alien city and engaged to marry a guy she’s never even met. All she wanted to do was save her friends, so they could get off the sand planet. She never dreamed she’d end up as some huge alien’s mate. She’ll play along until she can find a way to escape, and then she’s gone, and he’ll be nothing but a memory. What could go wrong with this plan?

As one of the high-born Cresteks, he could have his pick of mates, but now he’s been told he must marry the alien female they took from the Dothvek barbarians. The flame-haired female may stir his desire, but she also seems to take pleasure in defying him. The last thing he wants is a stubborn mate who doesn’t even want to be bonded with him. He’ll go along with it for the sake of his family honor, but he has no intention of falling for her. Right?

What listeners say about Tribute

Enjoyed the unusual dual narration, the story content was good, kept me listening to the end.

Holly and T’Kar
This one was not quite as great as the first three, partly because only the last third brings the characters from all the books together and mainly because I didn’t find our couple to be very likable,

Holly is all about no-strings get-togethers and feels quite shallow through most of this novella. She gets boozed up and throws herself at T’Kar without any thought to his culture or the bonding ceremony. I’m all for consensual friends with benefits, but juvenile tarts? No thanks.

T’Kar, for all his noble sentiments, nonetheless gets together with her knowing (a) she’s all for a hookup because she’s on birth control and (b) his people removed her birth control. His rationalizations for why he fails to set her straight before they do the deed (repeatedly) all fall flat.

For some reason, even though the duet narrators are the same, the voicing felt stilted. Holly’s voice was witchy and T’Kar sounded like a sweater wearing academic. Bought on sale, still worth it and events in this book set up for Caro’s story in the next one.

Really like this series; storyline is similar to previous books but has enough differences to keep it moving. Lots of laughs, romance, and drama. Narrators did a great job! Looking forward to listening to the next book!

Another great addition to an exciting series. Highly recommended! Can't wait for the next one to be released in audio book format. So in the meantime I will have to read it on my kindle.

I liked the slow build-up of bonding and love between the two characters. I would recommend it.