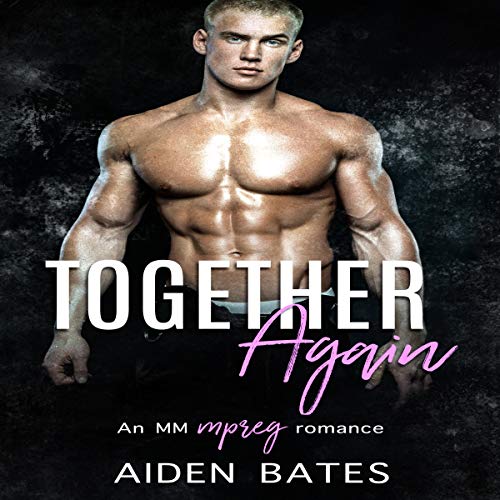 Together Again: An Mpreg Romance

By: Aiden Bates
Narrated by: Warren Zeman
Try for £0.00

As an investigator for HomeSafe that specializes in missing children, Elias will do anything to help kids in trouble. However, going back to his hometown isn't exactly at the top of his priority list. After all, the only man he's ever loved still lives in Boston. And that's one reunion he's not ready to encounter.

Alpha Pat Tessera always gets what he wants - and after all these years - he still wants Elias. When destiny steps in and forces the two to work together on a case, their passion and old feelings come back. But Elias harbors a secret that could ruin everything they've worked to rekindle. But with a baby on the way, the men must reconcile their broken hearts for the family they've always wanted. Can they find a way to forgive the past and build a future together?

Together Again is the sixth, steamy gay mpreg romance novel in the Never Too Late series. Although written in a series, it stands tall and hard on its own, but listening to it along with the others will only increase your interest and desire with a second-chance romance and a loving, hot pregnant man. It's "never too late' to embark upon a new and exciting genre.

What listeners say about Together Again: An Mpreg Romance

Elias is good at what he does. He is paired with Pat, his lover from the past. Pat’s boss is at it again, matching and giving second chances to his guys. The case they are working on is a hard one. Kids involved and all. It’s nice to see their love re-blossom. Will Elias give in already?!

This is a brilliant book to listen to as we follow Pat and Elias as they meet each other a decade later when they have to work a difficult case together. At first it’s hard for both of them to deal with but when they eventually talk it out they realise the problems they have had and decide to try again while dealing with the fall out of the case they were solving.

this narrator for me was about a 3.5 the story was good though but this narrator was odd for me. im not entirely sure what i thought of it.. it was good.. but not like i will listen to it again good lol

A joy to read

A worthy end to a series I have loved. The balance between relationship and investigation is just right...one does not overwhelm the other as is sometimes the case. The majority of the problems between Elias and Pat are resolved by half way through and then their relationship is solidified by working together to solve the missing children's case. Pat is not a typical alpha in many ways and is possibly my favourite from the Cold Case Department. The way he, Elias and Ryan work on behalf of the victims, and even the perpetrator, made this a joy to read.

Warren Zeman's rendition is quite speedy, but clearly spoken and easily understandable. I enjoyed listening to the different voices of the characters. My one gripe is that his voice often lifts at the end of a sentence (or chapter) and I sometimes waited for more to be said!

I loved this series and was sad to see it end but it ended on a high note. I loved Pat Tesaro's character throughout the series and was delighted that he got his happy ending.

The story is always 4 or 5 stars, because if I wouldn't like the story as ebook, I wouldn't listen to the audiobook.

The performance from the narrator is also very important for me. I can't listen to a lot, because my English as a non-native-speaker isn't so perfect to follow a whole story over hours, when the narrator speaks too fast or too sloppy. Normally I have to SEE the person, who is talking to me in English. It took me a little bit, to come into the narrator, but at the end, it worked. I only have to take a few breaks between. I'm just not yet finish with the book, but I listen enough to give a review.

3* - it's more then a one-time-listening, but not more then twice a year.
it's like a B

M/M, Alpha/Omega, pregnancy. Stand alone story that fits in with the others in this series. Pat can not understand why Elias is upset over their breakup, he was the one to tell Pat to leave. More was going on with Elias, but he never told Pat and both men put off important conversations about themselves and their relationship for too long. A great second chance story. I love these Alphas of Cold Case and the Omegas who love them.

This was a great read. Love this series. The characters are interesting and the storyline is exciting.

The best of the series! Excellent story, great narrator, amazing characters!!!
This story was full of heartbreak and fear of trying again, and yet everything got solved at the end. It left me feeling all cozy inside.
The narrator helped get into the story and it helped improve the experience a lot.

Can love survive a 10 year separation?

One dead child left in a white sheet shroud who died of diptheria opens a case of more missing children and possible deadly outbreak. The state police abused children and cold case units team up with an outside consultant to track down the kidnapper and save the children from disease. Elias from HomeSafe is brought in to help Sargent Tran from abused children and Detective Pat Tessera from cold case. Little did anyone know that Elias and Pat were together ten years ago while in college. Their split has kept them apart for ten years and now the must work together to solve this case. This series has been a great read and listen. The characters and story in this book five may be the best yet. The narration was very good. Some of the characters in this book were main characters in book four making the new narrator's voice for them seem strange. I highly recommend this book as well as the whole series.

This is a wonderful second chance story that will touch your heart. The story-line is sweet yet poignant and a bit heartbreaking at times. There is so much love between Elias and Pat that you want them to find their way together.

This is the fifth and final book of the Never Too Late series.

Another great story with enough going on to keep you interested. It’s great to have a lot of the same characters.

This was a pretty sweet 2nd chance with a good little bit of intrigue and mystery and a good story line that keeps you listening, a great addition to the series. Zeman does and ok job with narration, sometimes it was a bit emotionless and wooden sounding but overall not bad.

This was a great story, easy to listen to. I loved the narration. Would recommend.