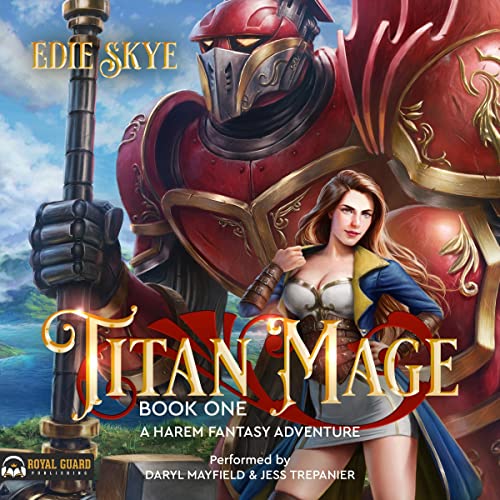 By: Edie Skye
Narrated by: Daryl Mayfield,Jess Trepanier
Try for £0.00

Paralyzed by a drunk driver, let go from his job, and stuck in a sad, stagnant town in the middle of nowhere, Joseph Locke was having the worst day of his life.

And then he died.

But considering that he wakes up with a brand-new body, in the cockpit of a badass steampunk robot, on an airship of nothing but hot babes, his next life may not be all that bad. Especially when he learns that he’s a void mage—the rarest and most powerful of all mages on the world of Haven. And his shipmates want to help him make more.

As if that weren’t enough, they offer Locke a job piloting one of their mechs, which they call Titans. In the meantime, Locke has to learn his way around this exciting world, all while coming to grips with his new—and dangerous—occupation. Will he be able to master his Titan? How can he best upgrade the machine to become as badass as possible? Why’s a strange parasitic sludge falling from the sky? And what’s up with the ghost of a space witch living in his Titan—and inside his head?

What listeners say about Titan Mage

I liked this mech harem series. Very strong start. Looking forward to next one in series.

Well worth reading or listening to, I did both and enjoyed the book in both forms. Now on to book two.

At my request I received a copy of this audiobook in order to give a fair and unbiased review.

Summary:
Joseph had a sad life in the middle of nowhere. He was paralysed after a traffic accident and he just lost his job. When a beautiful lady offers him a well paying job far away from the hellhole he has been living in he takes it.
Shortly after he dies. When he wakes up it is in a new body and with powers as a void mage. A rare magical affinity that makes him qualified for piloting a titan - a giant robot that can interact with his magical powers.
Being a void mage also makes him extremely attractive as a mate. And he just happens to wake up inside a Titan on a space ship with several hot women in need of his help.

Narrators
Voice diversity: The voices are diverse and recognizable
Pacing and intonation: The story is told engagingly and carries you away
Sex scenes: Well done.

The book’s strengths.
- The titans are cool. Who doesn't love a mech
- The girls feel different already in this first book
- I find the challenges of trying to survive and thrive as a mercenary company in a sci-fi setting interesting
- The narration

The book’s weaknesses.
- No weaknesses come to mind. I look forward to the next instalment in the series.

The MC is bland, the female characters are one note and annoying especially the one who keeps singing about sausages. it's just a boring book.

This was a great story that was really well written, and the humour had me in giggles from time to time. The duel narrators did a great job, too. I look forward to the next audiobook.

I’m not a great fan of Harem stories, but took a chance on this book from the description and I was glad I did.
The underlying story is good, the harem is in three parts, and is handled well, but doesn’t distract from the main story.
The main story is well written and while easy to summarise part way through, once again doesn’t detract from wanting to continue listening.

A great start to the series, with an interesting world with its magic system as well amazing characters.

First book I’ve read of listened to by Edie Skye and was really impressed. Both the characters and the world were engaging and kept my interest through out the entire story that I nearly listened to it all in one sitting.

I purchased this on a whim to try and find something new. I find the story was pretty good. It flowed well and I can see that this could expand into a wonderful world. The narrators did a fantastic job of bringing the characters to life. They, the characters took on a personality of their own.
Now the bad news, I just couldn't connect with this book. Guess I'm not into this type of books.
But it was not bad. Like I said I couldn't get into it but realise that it's still a wonderful book. So look
5*****

This was fun, well plotted with decent charcters and an interesting world.
Narration was excellent, though the female narrator could have used more variety in her accents to better help tell the charcters apart.

Eagerly awaiting the next one.

give it a shot

the book has a good quality it's definitely worth the credit or money and I would say the biggest thing it really needs is a longer story for 7 hours is kind of short but for the price and the reviews I've seen before it's a really good book definitely would recommend it and that's why I'm giving it the rating I am.

Really good story line Edie Skye did an awesome job writing it! Daryl and Jess did an amazing performance narrating it!!!

I'm returning this because it is both the kind of series I would like and its not for me at the same time. I like the sci-fi magic elements to it and the hints of world building where good for the most part its the other stuff lets just say behavior the author is telling you feels like stuff you should listen to if you want to be 30 and still single and end up a crazy cat lady or something.

not perfect, but a lot better than expected.

you like magic and Mecha? it's a good listen with a decent start and just enough world building to make you want to know more. the performances are funny and can be a bit cringe when not focused on the bigger picture of the story.

a really really good start to what I could see being a very popular series!

As the title states the narration for this book is superb. As for the story mechs is exactly what this genre needed, if I wasn't convinced before I am now. Usually when the mc is Isekaied I worry about them being too cringy. This book skirts that nicely too the point that it hilarious without being cringy. My biggest gripe would be that the characters fell a little flat near the party the harem shenanigans start. sorry from that I really enjoyed the book and look forward to the next one.

Who wants to be a hero? I doooo!

The startup of this book will leave you guessing. Once the thing happens and the action starts prepare yourself because it does not stop until the end of the book. The narration is awesome and on point!

I enjoyed this book, if you enjoy fantasy and harem you'll enjoy this book

Really enjoyed the story and the characters. Can’t wait for the next book hopefully it won’t be to long