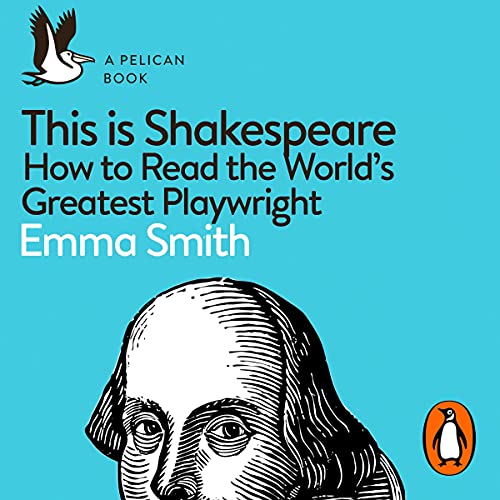 Penguin presents the audiobook edition of This Is Shakespeare, written and read by Emma Smith.

A genius and prophet whose timeless works encapsulate the human condition like no others. A writer who surpassed his contemporaries in vision, originality and literary mastery. Who wrote like an angel, putting it all so much better than anyone else.

Is this Shakespeare? Well, sort of.

But it doesn't really tell us the whole truth. So much of what we say about Shakespeare is either not true or just not relevant, deflecting us from investigating the challenges of his inconsistencies and flaws.

This electrifying new audiobook thrives on revealing, not resolving, the ambiguities of Shakespeare's plays and their changing topicality. It introduces an intellectually, theatrically and ethically exciting writer who engages with intersectionality as much as with Ovid, with economics as much as poetry: who writes in strikingly modern ways about individual agency, privacy, politics, celebrity and sex. It takes us into a world of politicking and copy-catting, as we watch him emulating the blockbusters of Christopher Marlowe and Thomas Kyd, the Spielberg and Tarantino of their day; flirting with and skirting round the cutthroat issues of succession politics, religious upheaval and technological change. The Shakespeare in this book poses awkward questions rather than offering bland answers, always implicating us in working out what it might mean.

This is Shakespeare. And he needs your attention.

What listeners say about This Is Shakespeare

A great primer to understand the greatest writer

When I was young, I thought Shakespeare was the worst thing ever. I used to think what does this man have to say to people today when everything that he wrote is 400 years old. I studied ‘Romeo and Juliet’ and ‘the Merchant of Venice’ when at school with Macbeth thrown in somewhere. I didn’t understand much of it and often thought what on earth the Hamlet speech of “to be or not to be“was about (it’s amazing now as he wonders what is life and if he should end it). Fortunately, I did further exams when I got to the age of 24 at night school and was introduced to ‘Richard III’, ‘the Tempest’ and ‘twelfth night’ and suddenly, like a switch bulb suddenly illuminating the dark, I begun to marvel at his prose, poetry and the wisdom. And then I was fortunate enough to see the ‘The Plantagenets: Henry VI and Richard III’ with a young Ralph Fiennes and Anton Lesser, and every word I understood and sparkled like gold. That the author states, Shakespeare is about asking questions not answering them. He certainly makes you ask questions about everything, and especially the human condition. Suddenly I was in love with everything that Shakespeare wrote. He went from my least favourite writer to being my favourite writer of all time (and still is). I had probably not lived enough or felt enough to understand how much his words could so explain the human condition. Who we are, how we behave, the contradictions within us, the passing of time, identity, family, love, why we exist and what is this little life we lead. And if Shakespeare is confusing or difficult to understand, it’s only because our emotions and lives are also too. But his words can be like soothing balm and just right. However, I often come to every Shakespeare play confused by the first scene (the author of this book also makes that point) and often take a while to understand what is going on. So you buy a theatre program at some extortionist price, and read it’s plot. But now I have this book on my phone (kindle), it replaces every program notes you need. 20 short essays cover the history, the sources, the themes and what the play means and has meant to audiences at different times. And written well. By buying this book, you probably no longer need to buy another theatre program again when you go to the theatre. and every time I go and see a Shakespeare play, providing it’s one of the 20 in this book which it probably would be (a few notable omissions but most of the great comedies, histories and tragedies), I would read the essay first to have a clear understanding of what will be going on before my eyes. I do wish that she wrote a bit more about Caliban when covering ;the Tempest; and there is a twist to ‘the Winter's Tale’ that is given away, but that’s fine because these summaries make me want to see some plays now that I haven’t seen. And I do enjoy the comments on the ones I know well. Well worth a read of any of summaries of the twenty plays included in this book before you see the actual play itself. You will have a greater understanding of it. And it will save you a fortune in buying programs (unless you want to know whose in the play) and perhaps we should buy the programmes to help the arts out. And this book definitely complements the plays.

... why aren't the Audible chapters given titles?!

I love the context, both contemporary and modern, that Smith gives the plays.

The best book (audio) on the subject I've come across. She has done a tremendous job of explaining just how great his body of work is. She blows away all the usual highbrow reverential nonsense. As she does it she becomes reverential herself, but in the right way. Up for hours last night.

What fools these mortals be.

An in-depth reappraisal of Shakespeare's work which can be enjoyed by literature students and casual readers alike.

Lucid, witty, allusive, and thoroughly compelling. The very best critical appraisal of a playwright I love, but others don't for various solid reasons, that I have ever encountered.

A fresh look at the plays of a genius

I always turn back to this book for a refresher before I see a performance of one of the plays. I can't say more than that!

Depends how you look at it

Where is help available for problems of downloading? Should I buy this title again????
Please Help.

Entertaining, up to date commentary

I’ve been traveling through Shakespeare for the last few months, reading and listening to the plays for the first time since college (a course on the histories) and high school — (R&J, Macbeth). I’m on my 25th play, and find the immersive approach works best for me. So in addition to watching some of the plays on film, I’ve also listened to lectures (mostly the Great Courses offerings) and some written commentary.

I’ve listened to about a dozen of these lectures over the last few days, and I’m impressed. They are insightful, entertaining and relevant. It is refreshing to listen to updated commentary. The #MetToo movement and fat shaming are mentioned, and obviously come to mind with Measure for Measure and Henry IV. There are some new tidbits I hadn’t yet come across (for example the black actor playing Othello interrogated for subversion during the Apartheid era in S. Africa). I highly recommend these, especially once you have read the plays. You can skip around to listen to the ones you’ve finished. They are narrated by the author.

Since I haven’t been able to find a list of the plays covered, I’ve listed the contents below:

A badass audiobook about a kickass author

Emma Smith’s Shakespeare is not the stuffy academic poet with material ready for inspirational posters at work and with the answers to Life, the Universe, and All That. Instead he is a weird, brilliantly confusing and ambiguous author whose work elicits far more questions than answers.

If you’ve tasted a bit of Shakespeare but didn’t quite “get” why so many people so deeply care about his work, or if you’ve been put off by the requirement to read a play in school which you hated, or even if you enjoy his plays but are looking for an offbeat left field analysis of the “canon,” then you have landed at the right place.

Smith has plenty of academic credentials (having written books with titles like “The Cambridge Introduction to Shakespeare’s Comedies” but this does NOT read like a textbook or sound like a class lecture.

Highly highly recommended for those who like to think about literature.

An outstanding overview of Shakespeare

This is one of the most lucid, insightful, and interesting books I’ve ever read about Shakespeare, and if you have even a passing interest in his work, then do yourself a favor and read or listen to Emma Smith’s “This is Shakespeare.” Organized by play, the book covers a wide range of material outside the plays – the life (what we know of it) of the man, the times, the performance and publication history, literary interpretations. She deftly demonstrates the source of Shakespeare’s enduring power—how the plays evoke responses that echo our age, just as they’ve done for 400+ years.

I suspected I would like the book – I was familiar with Ms. Smith’s scholarship – but I was surprised to find I loved it, and could not wait to resume listening to it. It feels like a set of really good, well-written lectures, and she delivers her own work very well.

Really enjoyed both the book and Emma Smith's narration. Interesting approaches to the plays at an enjoyable intersection of scholarly research and down to earth irreverence.