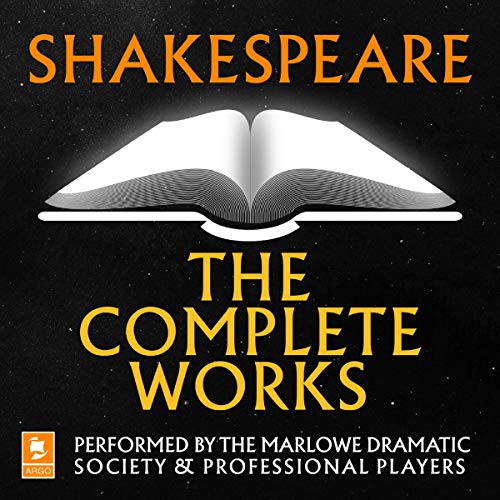 William Collins Books and Decca Records are proud to present Argo Classics, a historic catalogue of classic prose and verse read by some of the world’s most renowned voices. Originally released as vinyl records, these expertly remastered stories are now available to download for the first time.

For the first time, the complete works of Shakespeare are available to download as one. This collection includes all 37 plays, four narrative poems and the sonnets.

Performed by an incredible array of the 20th century’s greatest actors, Ian McKellen, Timothy West, Diana Rigg, Derek Jacobi, Roy Dotrice, Prunella Scales and many others can be heard in these recordings.

All of the Shakespeare plays within the Argo Classics catalogue are performed by the Marlowe Dramatic Society and Professional Players. The Marlowe was founded in 1907 with a mission to focus on effective delivery of verse, respect the integrity of texts and rescue neglected plays by Shakespeare’s contemporaries and the less performed plays of Shakespeare himself. The Marlowe has performed annually at Cambridge Arts Theatre since its opening in 1936 and continues to produce some of the finest actors of their generations.

What listeners say about Shakespeare: The Complete Works

The works are ordered alphabetically.
If you opt to download by parts, they are divided as follows (unfortunately Audible is not preserving my formatting) -

The plays are listed now!

I downloaded this, slightly concerned that I’d have to wade through every play to find what I needed. But the plays are listed once you download the book on the app (it’s split into 9 parts, and each part is divided into chapters, with the beginning and end of each play being clearly marked). It would be handy to have a master list of plays, in order to locate the part you need to download if you don’t have room for everything, but they are in alphabetical order so it’s easy to make an educated guess. Wonderful value to have all the plays together like this.

I've had some of these Marlowe Shakespeare productions on tape for decades - the tape sleeves have full cast lists and other information (the original LP records had even more). They were also in decent quality sound.
These Audible versions seem to be missing even basic cast information and I hate the "Cloud Player" which seems to be the only way to find out where the plays actually start.
The audio quality is not great, barely 64kbps, and very inferior to my old tapes.
Why can't we get decent audio quality and proper PDF notes?

Was excited to download this. I went straight into King John, and I thought the performances were strong. Problem is that act 5 is completely missing, I haven't listened to any others as yet, so who knows how many plays are missing bits. Very much ruins it

some chapters not in right order.

technical issues. much ado about nothing. chapter 4 is the start of the play..... chapter 1 is half way through! good job i knew the play or would have got very confused! hope I don't come across any more problems!

To buy or not to buy?

Yeah you know, its billy shakes, was good an all that but, needed more trumpets.

You don’t need a random fellow listener to tell you that these are masterpieces, so on to the production: it’s generally very good, but I’ll warn all headphone users that the “stage”-whispering and -yelling is occasionally all too real, and the effects and fanfares are sometimes painfully loud. Additionally, I can’t understand the choice to have the works in alphabetical order, as you’d surely want to listen to the Henriad(s) in order.
Still, ‘tis no dealbreaker, I won’t be returning this one.

Stories would be fab but unfortunately this audio book is just a terrible recording of the plays without the full reading.
It may be ok for those who know the plays inside out and want to relive it but for someone who wants to live it for the first time it's terrible. The audio is also hit and miss so hard to follow.

Able to view title of the plays on Android

I used an old and latest Android, and on both screens I could see the title of the plays, and they were further broken down into different chapters which I could also see on screen. I could listen to just the works I haven't seen or read.
On my very old iPod Touch I couldn't see the title of the plays but I don't have the latest Apple devices so I don't know what their screens show now.

This is a great collection of most of Shakespeare's works. The only play that is missing is 'The Two Noble Kinsmen', a collaboration attributed to Shakespeare and John Fletcher. However, there are a few missing section in this collection as of the date I'm writing this review (26 Feb. 2021). Act V of 'King John' is missing as are Acts IV and V of 'Pericles'. Hopefully this is just an oversight and will be corrected.

Example: Much Ado About Nothing

...... come on! Let' s see if Audible, or the manufacturer of the product, will do anything about this... and the other problems presented in the other reviews.

ADDENDUM: Pericles is missing Acts 4 and 5 (what does Audible and Argo Classics have against poor Pericles)? King John as reported elsewhere, is missing Act 5.

Wondering if Audible and/or Argo will fix the above.....

ADDENDUM TO THE ADDENDUM: Just listened to Love's Labors Lost.... there is only Act 5, scene 1. There is no Act 5, scene 2. And Act 5, scene 2 is the longest act in the entire play!

Not recommended for trying to sleep :)

I know this review won't be helpful to most. I listen to audiobooks to go to sleep, but there are horns at the start of the chapters. It kept waking me up! lol

Just started listening. These are remastered old recordings. The sound thus is full of echoes of the soundstage. Annoyingly, King John, Act V is missing. And this is the first play I listened to, so hoping the rest of the plays are complete. The actors are exceptional and I wish a pdf of each play's list of actors was included. Nice to listen along while reading the Riverside Shakespeare.

Great resource but with problems

I love reading the plays while listening to this audiobook. It’s the best way for reading the plays, second only to watching a live performance.
However, I stumbled upon some issues. There are parts missing. I was listening to King John and the play jumps from the end of Act IV to the end credits.
Also I would like to know who the performers were for each play. I would also like to have a table of contents for each part of the audiobook to avoid having to guess when I want a specific play.

Shoddy Curation - Who Was in Charge of This?

Of course these are very old recordings, some 60+ years, so the lack of clarity is understandable. What is unforgivable, however, is selling something as The Complete Works when so many things are missing. Not only scenes, but entire acts are gone. Also very disappointing that not full cast list is available. I contacted Audible about this as initially the Title Details stated that full cast list was available but didn't say where. After a few days, I was told that a pdf was being prepared and would be available for download soon. More than a week later, I was informed than no such pdf would ever be available. Overall a very disappointing experience that Audible should rectify.

There is no easily locatable table of contents. So you probably have to download the entire thing--nine parts--and check individual TOCs to find the particular play you want to hear. They're arranged alphabetically (for some reason). Can be frustrating.

Recording is not great, performances are mostly generic except for some bits of Henry IV Part 2, and multiple plays are missing sections. Unfortunately there are better ways to hear these then this collection.

very difficult to understand due to poor recording. sounds like sitting in the doorway of a high school auditorium.

Can you recognize famous acting voices?

I found it most helpful to listen to a play while reading that play.