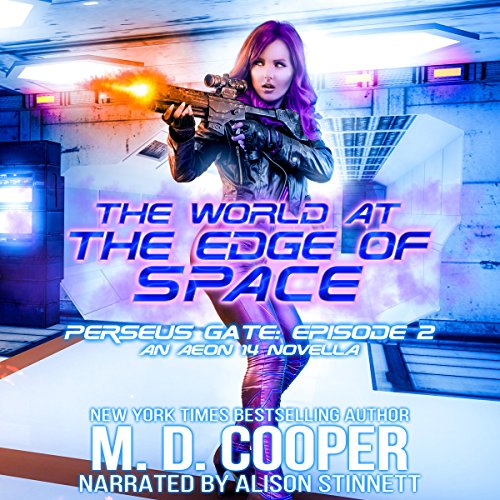 The World at the Edge of Space

Meanwhile, in the Perseus Arm of the galaxy....

After near disaster trying to escape the Transcend at the Grey Wolf Star, Jessica and the crew of the Sabrina find themselves thousands of light years from their intended destination, deep in the Perseus Arm, at one of the furthest colonized worlds in the galaxy.

Sabrina has taken damage, Cheeky is in critical condition, and their supplies of antimatter and fusables are critically low.

The only system in sight? Controlled by the Orion Guard - their enemy.

It's going to take some quick thinking and smooth talking to get the ship repaired and figure out how they're going to travel clear across human space without being caught and destroyed by their now myriad enemies.

Reading Order: The Aeon 14 universe is vast and growing quickly. To help you know where to go next, pick up the handy dandy free reading guide at amazon.com/dp/B073MY9Z87 about M. D. Cooper and Aeon 14.

M. D. Cooper is a New York Times best-selling author who has envisioned a rich future for humanity, one where planet-sized megastructures house trillions of humans, but traveling between the stars still takes decades, or even centuries. Fans of Ringworld, Honor Harrington, The Expanse, or Elizabeth Moon's Vatta's War will feel right at home in the world of Aeon 14.

Over the course of the next few years, M. D. Cooper plans to release an additional 22 books in this expanding universe. So get on board the Intrepid with Tanis and see what the stars hold for us.

The universe of Aeon 14 is based on the premise that advanced, intelligent, star-faring life takes 14 billion years to evolve. In astronomy, an aeon is a billion years. In Aeon 14, humanity is at the leading edge of this evolution in the Milky Way Galaxy. Humanity and the AIs they have created spread out amongst the stars and find that they are alone, though it may not always be that way....

What listeners say about The World at the Edge of Space