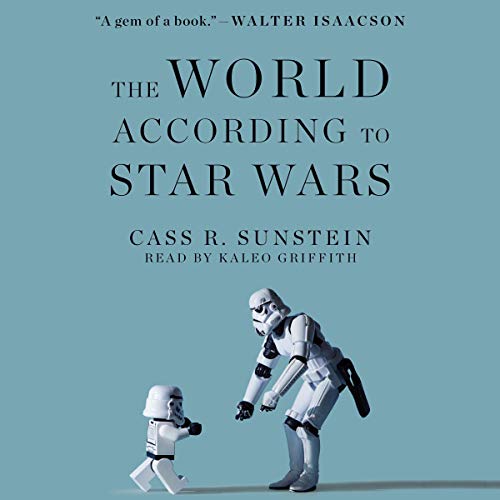 The World According to Star Wars

By: Cass R. Sunstein
Narrated by: Kaleo Griffith
Try for £0.00

"Star Wars is the ultimate mythological tale of our age, a hero's journey that is a tribute to the beauty of human freedom as well as an exploration of its dark complexities. In this gem of a book, the brilliant Cass Sunstein uses the series to explore profound questions about being a parent, a child, and a human. It will change the way you think about your own journey, and it might even make you pick up the phone and call your dad." (Walter Isaacson)

A deeply original celebration of George Lucas' masterpiece as it relates to history, presidential politics, law, economics, fatherhood, and culture by a Harvard legal scholar and former White House advisor.

There's Santa Claus, Shakespeare, Mickey Mouse, and the Bible, and then there's Star Wars. Nothing quite compares to sitting down with a young child and hearing the sound of John Williams' score as those beloved golden letters fill the screen. In this fun, erudite, and often moving book, Cass R. Sunstein explores the lessons of Star Wars as they relate to childhood, fathers, the Dark Side, rebellion, and redemption. As it turns out, Star Wars also has a lot to teach us about constitutional law, economics, and political uprisings.

In rich detail, Sunstein tells the story of the films' wildly unanticipated success and what it has to say about why some things succeed while others fail. Ultimately, Sunstein argues, Star Wars is about the freedom of choice and our never-ending ability to make the right decision when the chips are down. Written with buoyant prose and considerable heart, The World According to Star Wars shines new light on the most beloved story of our time.

What listeners say about The World According to Star Wars

An insightful and in-depth analysis of Star Wars

Very in depth and well analyzed story about all things behind Star Wars. Nice and insightful story. Only critique I have is that it is analyzed from an American perspective (especially the political and culture references). Although George was American and hence Star Wars has that as reference, there is more to the world that could have been used in the analysis.

Definitely recommend it to those interested in more that just the base story of Star Wars.

The title says it all

A terrific short listen -- even for those of us who merely "like" the Star Wars movies. It is indeed a wide-ranging look at the world through a Star Wars lens, and I can imagine those who love the series will enjoy the book even more than I did.

At times it's fun and light (Sunstein has a surprisingly good sense of humor for a regulatory czar!), and at times it's quite serious and thought-provoking. The chapter on fatherhood was particularly insightful.

I highly recommend this book to all fans of the famed Star Wars saga. It gives excellent insight into the creative minds of those who contributed to its making. Whether you’re a fan of the original trilogy, the prequels or the new sequels, you will enjoy this book and the correlations made between the fantasy world of Star Wars and the the world we occupy. The narrator is also brilliant and engaging. He really captures the author’s intentions and keeps you wanting more. As always, may the Force be with you.

"The world according to d-bag with star wars metaphors" is more like it. It feels like a very immature or "fanboy" understanding of the story and an amateurish attempt to analyze a cultural phenomenon. I had to rate low on performance too because he quotes lines from the story and can't even say them with the same inflections that the actors said them. I don't feel like I'm being picky, but if you don't say it right that you're saying it wrong.

I learned so much about Star Wars

I loved this book. It taught me a lot of interesting things about Star Wars!

I really enjoyed this book, narration is great. I liked hearing about some of the behind the scenes back story. I like how it ties it to current day living and lessons to be learned.

A semi intellectual look at the series connecting dots you've already connected yourself, fun facts that are better detailed in other books, and inane opinions that belong on a facebook comment thread (including irrelevant thoughts on Taylor Swift). The narrator does a good job but obviously isn't very well versed in Star Wars, as he mispronounces many of the names and terms from the series.

Love this book brings Star Wars to my life.
Yes will recommend it!
Great storytelling

I absolutely love SW & Sunstein, but unfortunately this combination does not work at all.

Interesting analysis of the world from a different approach, especially for those Star Wars fans.
The reading is crystal clear although a little bit embarrasing when dialogue is played. Anyway, it's one of the best play I've heard

...but to the long time Star Wars fans, it will not bring much new to the table.