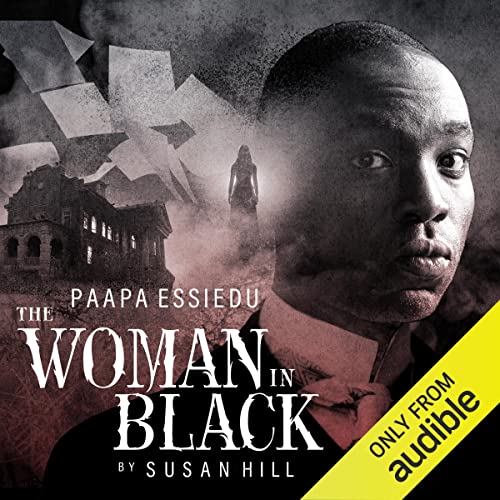 The Woman in Black

By: Susan Hill
Narrated by: Paapa Essiedu
Try for £0.00

A chilling new version of Susan Hill’s classic ghost story, recorded in immersive 3D sound and narrated by Paapa Essiedu (I May Destroy You, The Lazarus Project).

Eel Marsh house stands alone, surveying the windswept salt marshes beyond Nine Lives Causeway. Mrs Alice Drablow lived here as a recluse. Now Arthur Kipps, a junior solicitor with a London firm, is summoned to attend her funeral, unaware of the tragic and terrible secrets which lie behind the house's shuttered windows.

It is not until he glimpses a young woman at the funeral with a wasted face, dressed all in black, that a sense of profound unease begins to creep over him, a feeling deepened by the reluctance of the locals to talk about the woman in black or what happens whenever she is seen.

Kipps has to stay on in the lonely house, sorting out Mrs. Drablow's papers. The mist begins to enshroud it and the surrounding graveyard and the high tide cuts it off from the outside world....

What listeners say about The Woman in Black

So magnificently narrated, such fab sound effects .A delight to listen to.
It really brings the chilling story to life in a wonderful way.
I especially liked the Radiohead cover at the beginning and end, too.

Wonderful listen,Paapa has the perfect voice,narration can be the big decider on determining whether you continue listening to any book.

Amazing storyline and characters I was so immersed in the sounds at times I had to look around when walking thinking I was been followed or what the sound was then realised it was the sound effects. Narrator Paapa Essiedu you brought the characters to life and the plot, Susan Hill and the team well done will be looking for more listens.

I really enjoyed this immersive 3D experience! It's something I'm going to look out in future because it helps me really get properly hooked into a story. Loved the main actor and the characters and the music was ace too.

Excellent all round, from the narrator who was perfect for this book to the sound which I usually hate in an audio book but in this is just a little bit and used in all the right moments, the overall production was perfect. Not a lot I can say about the story as I am sure everyone already knows that it is one of greatest haunted house stories written. Listen to this all alone at night and try not to get the tingles.

Beautifully read and chilling audio. I felt like I was in the room at times

Good story and pleasant narration...... BUT!

What on earth makes the editors of such a good story think that the reader cannot possibly understand that there is a pony and trap WITHOUT actually HEARING the sound of a pony and trap, or a whistle for the dog WITHOUT HEARING the sound of a whistle. These are just two examples of the irritating background noise that assume that the listener is too stupid to understand the audio book without SOUNDS and BACKGROUND NOISES!
If I wasn't happy with the narrator's voice I would not have been able to listen!

Wonderful moment spent with Paapa, Arthur and the Women in Black! By chapter 4, I was so hooked I cancelled my plans for the day to listen to it till the end, straight. I highly recommend it.

Wow, I love the combination of brilliant narration, haunting music and sound effects to create a sense of place. Amazing 👏

The premise is an interesting take on a classic, and the atmosphere is fairy well built, but the execution of the story is just far too predictable, which is anathema to effective horror. You’ll reach conclusions so far ahead of the protagonist that the strongest emotion evoked at times will be annoyance with him.

Perfect ghost story. An estate agent sent to close up the house of a recently deceased woman meets the ghost that haunts all who enter. She is the ghost of a vindictive, vengeful woman that lost a child. She seeks to harm the children of others.

Lovely gothic horror tale of a specter bent on vengeance. The narration, 3D audio, and music accompanying were absolutely fantastic. The narration, sound effects, and ambient music elevated this classic into so much more than a story. It felt as if you were right there with the protagonist. It amplified the sense of dread, terror, and horror to levels that I rarely feel in novels or other audiobooks. Audible absolutely hit a grand slam with this version of The Woman in Black.

Wow! I’ve seen the movie, read the book, heard an earlier version but this is truly an all new experience. Paapa Essiedu is so perfectly cast and the subtle sound effects produce the best kind of creepy atmosphere. Well done!!

Incredible performance of the classic novel

Wow this audiobook was stunning! I love the novel and for Halloween I wanted to listen to it for a new experience. I’m so glad I did! Paapa’s performance was soooo good, and the 3d audio elevates it to a whole new level. There were times where I was legitimately looking over my shoulder in fright because The sound effects were so real.
Listen to this book with headphones for the full experience! You won’t be disappointed.

I honestly don't know if I would have liked this book as much if I hadn't listened to it on audible. I absolutely love this narrator.

I enjoyed the 3-D experience of this read. The narrator was skilled and helped the listening experience feel immersive. A good read for a spooky experience.

I loved this story and this production. The reader was amazing with the sound effects and music adding greatly to the experience. I highly recommend reading it.

great ghost story but several times, the sound effects in the background drowned out the narration.

I have seen the movie, this was an unexpected surprise. I didn't know there would be jump scares but I loved it. the unexpected ending was so sad. good job with the narrations and music and sounds

Great Listen for the Halloween Season!

Loved this Audible presentation! I listen on my work commute-some if it during darkness. I wasn’t scared, but it just had that “feeling” of the ghost world.