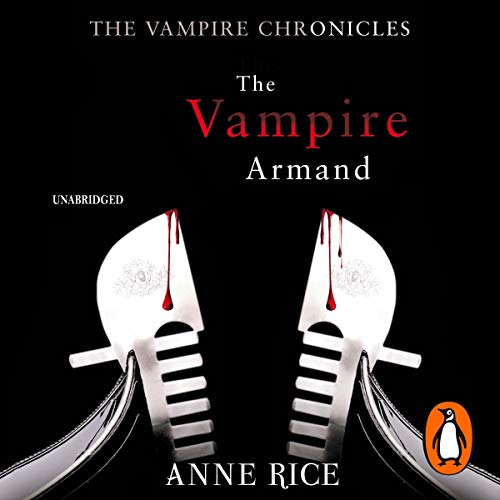 By: Anne Rice
Narrated by: Jonathan Marosz
Try for £0.00

Magnificent and electrifying, The Vampire Armand tells the tale of the mesmerising leader of the vampire coven the Theatre des Vampires in Paris.

This angel-faced killer was snatched from the steppes of Russia as a child and sold as a slave in Renaissance Venice. From there Armand's story spans several hundred years, culminating in a visit to New Orleans at the end of the 20th century.

Here his victims await either death or immortality. But once there his own existence comes into question when he must choose between salvation and his immortal soul.

What listeners say about The Vampire Armand

Not the best so far

After Simon Vance narrated the previous books it was difficult to adjust to Jonathan Marosz. The story was fair but no where near as much action or intrigue as previous books.

Would you try another book written by Anne Rice or narrated by Jonathan Marosz?

The Vampire Armand is probably one of my favourite of Anne Rice's Vampire chronicles. having listened to Simon Vance's excellent narration of others in the series, I was utterly disappointed by the audio version of this volume. Terrible!

What other book might you compare The Vampire Armand to, and why?

The story itself is a great one, and one of the best in the series IMO. Shame about the narrator.

Would you be willing to try another one of Jonathan Marosz’s performances?

No - will be avoiding this narrator in future

Disappointment. The narration was toneless, monotonous and in totally the wrong accent.(Armand is meant to be Ukranian, not downtown New York!) Words were frequently mispronounced (Djeballah instead of Djellabah), and attempts at contrasting accents (for example, the character of David who is British, and Benji, an Arab) were woeful. The experience was ruined by the narrator.

Please re-record this with a decent narrator that fits with the other books in the series!

I am biased. I've enjoyed Anne Rice's Vampire Chronicles immensely for a long time. This story is in the tradition of that series and provides a great deal of detail about Armand's life. It helps to 'flesh out' the world that Anne Rice has created for her characters.
The narrator, Jonathan Marosz, has managed somehow to take all of this detail and this emotion and reduce it to something worse than having a small insect in your ear. He seems to think that any vampire is living with nothing but the most traumatic regret. He might be describing the atrocity of Marius's immolation or the ecstacy of Armand's visits to Bianca, but he makes them both sound exactly the same. His narration would have been more bearable if it had been a straight monotone, but his every sentence is spoken with a kind of dying fall, making everything sound depressing and sad.

What other book might you compare The Vampire Armand to, and why?

Any other book in this series is equally excellent. Blood and Gold, Pandora and all others that deal with just one of the specific characters. Anne Rice has created a fully realised universe with this series.

Who might you have cast as narrator instead of Jonathan Marosz?

Amazon's Alexa would have shown a greater variety of emotion than Jonathan Marosz. Simon Vance has done an excellent job of narrating several other titles in the series. I don't understand why he didn't do this one.

Could you see The Vampire Armand being made into a movie or a TV series? Who would the stars be?

In my opinion, it shouldn't be. Immortality is a difficult thing to portray with living actors.

Not a story, it's gay erotica.

As others have said, Mr Marosz's delivery of the story is not as good as that by Simon Vance who narrates most of the other Vampire Chronicles. Each to their own, and I'm sure Jonathan has his fans, I'm just not one of them.

i really love anne rice stories and i fall in love with all the characters and again with armand, The Main spoil for me was jonathan maroz, dull monotone voice no add of life to to the story what so ever, never allow him to narrate again PLEASE

Why change the narrator?

Only listened briefly and decided to give up. Real struggle to adjust to a new narrator in the series...

The narrator was just not very good at all. I liked Armand, I think his story was interesting, and I felt sorry for him for most of it. It just took me a while to finish because the narrator's voice was really difficult to listen to!

The Narrator wasn't great but the story was.

The Narrator for the first hour was so monotone and I almost stopped listening. I'm glad I stuck with it as the story was great and I liked Armand's back story. Also I needed to hear the continuation of the other Vampire Chronicles.