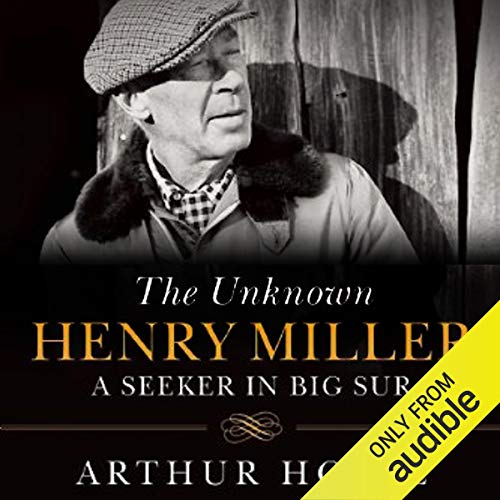 By: Arthur Hoyle
Narrated by: Jonathan Yen
Try for £0.00

Henry Miller was one of the most distinctive voices in twentieth-century literature. Better known in Europe than in his native America for most of this career, he achieved international success and celebrity during the 1960s when his banned "Paris" books - beginning with Tropic of Cancer - were published here and judged by the Supreme Court not to be obscene. Until then he had toiled in relative obscurity and poverty. The Unknown Henry Miller recounts Miller's career from its beginnings in Paris in the 1930s but focuses on his years living in Big Sur, California, from 1944 to 1961, during which he wrote many of his most important books, including The Rosy Crucifixion trilogy, married and divorced twice, raised two children, painted watercolors, and tried to live out an aesthetic and personal credo of self-realization.

Written with the cooperation of the Henry Miller, Anais Nin, and other estates, The Unknown Henry Miller quotes extensively from Miller's correspondence in order to offer the listener direct experience of the author and man. It also draws on material not available to previous biographers, including interviews with Lepska Warren, Miller's third wife, and revelations from unpublished portions of Anais Nin's diaries. Behind the "bad boy" image, the author finds a man with devoted friendships, whose challenge of literary sexual taboos was part of a broader assault on the dehumanization of man and commercialization during the postwar years. He puts Miller's alleged misogyny in the context of his satire of sexual mores in general, and makes the case for restoring this groundbreaking writer to his rightful place in the American literary canon.

What listeners say about The Unknown Henry Miller

In-depth on the 2nd major phase of Miller's career

Really enjoyed this book. I have given it five stars overall mostly because this book fills a significant gap in the literature and I don't know of any other like it. Most bios of Miller concentrate heavily on his early life in Brooklyn and Manhattan and the first phase of his career in Paris, when he wrote the three sensational books that made him famous. Understandable enough, but the bulk of his work was composed outside Paris, mostly in Big Sur, from about 1940 to about 1960, and I would argue that these later works are at least equally important, and perhaps even more important, than the earlier works. This biography finally gives this second phase its due. It also tells, in brief, the story of how the Tropics ended up getting published by Grove Press and the trials and tribulations that brought into Miller's life, replacing his previous problem of not-enough-money-ever with the opposite problem of too-much-money-at-once. Miller's final years in Pacific Palisades are summed up in a single chapter, which is also appropriate, since Miller effectively retired from writing in his late 60s, pursued watercolor painting almost exclusively to his death, and led a fairly settled life compared to the previous years.

I gave story four stars because the writing is very slightly repetitive, giving the same information several times as if the chapters were written to be read as stand-alone articles. This might be ideal when consumed over a long period of time, but as it happened I listened to over half this book in one sitting on a sick day, so the repetition of information stood out for me.

As to performance... well. Jonathan Yen is basically a good narrator and is pleasant to listen to. However, I have to deduct one star for his terrible pronunciation of French and German names. When correct or half-correct, it seems accidental, as if he's had zero real exposure to those languages and just made it up on first sight and stuck with his first notion. There is really no excuse for this -- in this day and age he could have called up advice on every term on YouTube, in the studio itself, before proceeding with the narration. What makes it even 'better' is that he sets off these badly-pronounced words and names with a pause and a sense of moment. It was bearable mostly because his pronunciation is so far off the mark that it was actually hilarious. I mean, who manages to mispronounce 'Proust'? And if you're going to narrate a book about Henry Miller, the least you can do, the *very least*, is ensure that you are pronouncing the name 'Anais' correctly. (Here's a hint: it DOESN'T end with a 'z'!) Passages about particular authors, especially the ones on Rimbaud and Cendrars, repeated those names so many times that I was in absolute stitches listening to his portentous mispronunciation over and over again. Certain European cities come up a few times later on and, for example, it took me a little while to realize he was talking about *Laussane* after its first mention.

That said, it really is a good reading despite that particular bit of silliness and if you can have a sense of humor about it, I do recommend this book overall on all counts.

The Path of the Seeker

A pleasant surprise, to enjoy the rebellious and insightful spiritual searchings and life path of Henry Miller after having visited the Henry Miller Library in Big Sur, this was especially enjoyable.

What you wanted to know

Would you try another book from Arthur Hoyle and/or Jonathan Yen?

Could you see The Unknown Henry Miller being made into a movie or a TV series? Who should the stars be?

It was good. Not sorry I bought it. The end became tedious with repetition of facts

I was more familiar with Henry Miller as an artist than an author, so it was interesting to discover all of what made up the person and his creative force. Since I think of him as prolific in his works, I found it remarkable that he lived so much of his life on a shoestring - getting by on a series of handouts from people around him that appreciated either Henry Miller the man or the author (or both). The paintings through which I knew him were really only a secondary pursuit, born out of the need to make ends meet.

The narrator is very easy to listen to, and was obviously immersed in the book himself. Because of the previous review, I was wary - but I thought he handled foreign words fine. If there was sometimes a slight differentiation in the reading of those words, I thought it only served to offer them up as unique, highlighting for the (most likely American) listener that there's something special about where and with whom this noteworthy author and artist spent his life.

why aren't narrators taught how to pro-nounce

well if i had recalled that the same Mr Yen had narrated "spillover" i still would have bought as i consider Henry Miller one of the last centuries most important---and fascinating authors.

that said it is painful while the narrator slows down and tries to accentuate a usually mispronounced name or place/ this was produced by our own "audible studios'--come on audible--someone help these narrators....

that said, the book is excellent so far but i take it slowly/ see reviews for " spillover" for similar narrator problems/