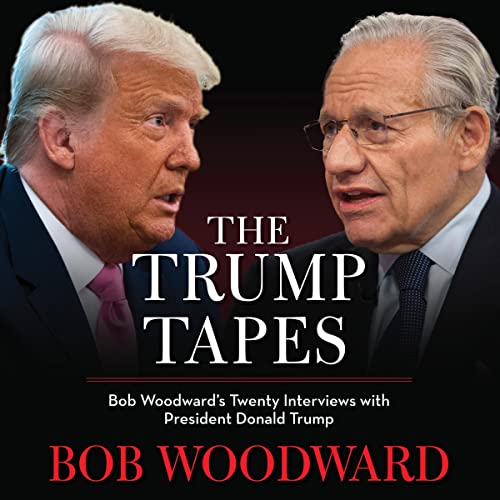 “I’m doing something here that I’ve never done before, presenting the lengthy, raw interviews of my work. In the fall of 2019 through August 2020, I interviewed President Trump 19 times for my second book on his presidency, Rage. I had also interviewed him in 2016 when he was a presidential candidate. I decided to take this unusual step of releasing these recordings after relistening in full to all 20 interviews. As I listened to them again I was stunned by their relevance to understanding Trump. Hearing Trump speak is a completely different experience to reading the transcripts or listening to snatches of interviews on television or the internet.” Bob Woodward from The Trump Tapes

The Trump Tapes is the intimate and astonishing audio archive of Bob Woodward’s 20 interviews with Donald Trump.

Featuring more than eight hours of Woodward/Trump conversations, The Trump Tapes is as historically important as the Frost/Nixon interviews. In this up-close, unvarnished self-portrait of Trump and his presidency, listeners will hear Trump as Woodward did: profane, incautious, divisive, and deceptive, but also engaging and entertaining, ever the host and the salesman, trying to sell his presidency to win Woodward over.

Relying on familiar devices – airing grievances, stoking divisions, repeating himself to a staggering degree, as if saying something often and loud enough will make something true – Trump uses his voice as a concussive instrument, pounding in the listener’s ear.

In new commentary created exclusively for The Trump Tapes, Woodward at times breaks frame from the interviews to provide essential context or clarification. But for the most part the interviews proceed uninterrupted, fulfilling Woodward’s goal of presenting Trump’s voice and words for the historical record, and offering listeners the chance to hear and judge and make their own assessments.

As relevant as ever to the task of understanding Donald Trump, The Trump Tapes reveal Trump in his own words – a man consumed by the past and clinging to his grievances, unable to understand his responsibilities as president or address the crises affecting the country.

What listeners say about The Trump Tapes

I'd forgotten how narcissistic and child like that man was. The repetition of lies and complaints is difficult to listen to, Woodward challenges the Babyman but ultimately moves on to other topics seemingly realising the person he's talking to is mental.

The tapes cover the arrival of covid and the run up to the election.

On several occasions I had to check that I hadn't accidentally rewinded the audio book, but it was just Babybollocks repeating himself, again.

On the whole it was an interesting listen, but uncomfortable to recall he was the president of America.

When you thought you knew it all

Hoisted upon his own petard is a pale expression when attempting to describe the self-delusion by which the 45th President conducts his entire life. After listening to his thoroughly unpleasant voice tell lie upon lie, admit to crime upon crime. without any apparent awareness that he is doing so, I can only conclude that he believes what he is saying. I congratulate Woodward for making periodic fact checks because otherwise, it would have been unbearable to listen to the whole thing. It is an appalling display of an avaricious want to be despot who overreached and failed. My greatest criticism is that Woodward held back pieces of the interviews that could have potentially saved lives. Sadly, it only confirms what many of us already knew in 2016. Those who need to hear it will never listen.

Trump is a nutter

And these tapes prove it, completely mad, obsessed with his legacy and nothing else. A liar, a bully and a cheat

If you’re curious about Trump and his character this is a ‘must’ - it’s incredibly candid and the listener can assess for themselves, the Don as he says what he thinks. Woodward skilfully allows Trump enough rope to hang himself slowly however, there are times when what the ex President makes sense.

As a great journalist, Bob Woodward lets the subject speak for themselves. Trump exposed himself as the liar he is.

idk how Bob managed to keep his cool during these "interviews". It was so difficult trying to follow what Trump was saying (I needed more commentary, less extended ramblings).
Like a toddler high on Coke & Haribo, he just can't stay on topic, goes off on bizarre rants, can't, or refuses to, answer a question.
during seemingly important questions about the pandemic, or nuclear weapons, or the danger of Russia, he just talks utter nonsense before going on endless rants about being the greatest person, the best Bob, the best.
it's a disgrace that this man was ever allowed into national Gov't.

Utterly compelling. Like being locked in a tumble dryer that changes spin direction at a whim.

A scary observation of History. If you want to know about Trumps presidency, definitely listen. All is fact checked. I need a glass of wine after listening to that. 😳

This audio conveys so much that the book cannot do. One key aspect I found amazing was the quote explaining that China bought up all the PPE around the globe before telling the world it had a problem. A crime against humanity perhaps? Whilst the tape quality may be a challenge it doesn’t take away from the performance

For sure, Trump will track these reviews. It's a number - could be useful some day.

I loved the narration and detail. Have always enjoyed Bobs work. This gives a lot of background