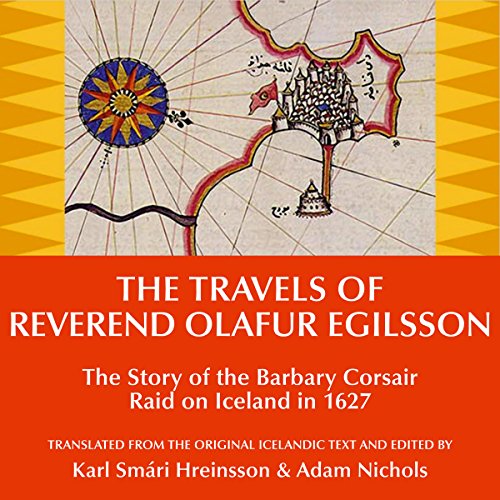 The Travels of Reverend Olafur Egilsson

In the summer of 1627, Barbary corsairs raided Iceland, killing dozens of people and abducting close to 400 to sell into slavery in Algiers. Among those taken was the Lutheran minister Reverend Olafur Egilsson.

Reverend Olafur wrote The Travels to chronicle his experiences both as a captive and as a traveler across Europe (he journeyed alone from Algiers to Copenhagen in an attempt to raise funds to ransom the Icelandic captives who remained behind). He was a keen observer, and the narrative is filled with a wealth of detail - social, political, economic, religious - about both the Maghreb and Europe. It is also a moving story on the human level: we witness a man enduring great personal tragedy and struggling to reconcile such calamity with his understanding of God.

The Travels is the first-ever English translation of the Icelandic text. Until now, the corsair raid on Iceland has remained largely unknown in the English-speaking world.

"It is wonderful that finally two scholars have taken the initiative to translate into English this important text." (Kirsten Wolf, University of Wisconsin-Madison)

What listeners say about The Travels of Reverend Olafur Egilsson

This is a subject that very few people have any knowledge of even if your from Iceland.

I expected to be bored about a subject that appears so irrelevant to this present period.

But I found myself drawn to the Universal nature of the story.

With a good Narrator this is a enjoyable experience.

Sad, Fascinating and Compelling All In One

I am a history buff but I knew absolutely nothing about the practice of kidnapping citizens of Nordic countries to northern Africa in the 17th century. This was certainly an eye-opening and compelling look at the practice from the perspective of one of its victims. The narrator was perfect for the book and his interpretation of the text added a lot to the drama. Even 400 years later, the horror and suffering that the people of this time experienced came through clearly. It was also fascinating to hear of some of the customs, clothing and culture of the various countries of Europe at this time. I recommend this book to everyone who is fascinated by history.

This is the first book I’ve read/listened to by these authors and I would gladly listen to another.
The first 40 minutes is an introduction to the travels explaining some background and context to expand upon the peoples involved.
Next is Reverend Olafur’s travel book which comprises less than two hours. He does not just write a blow by blow of his trials to get home. Interestingly, his notes are his comments and interpretations about the places and peoples he comes in contact with, and acknowledgements of those who helped him.
The last four hours of the book is broken into two parts. The first part involves letters written by captives and eye-witnesses that avoided capture, as well as information to expand upon the letters. The second part is the appendices broken into three parts: 1. Algiers 2. Seventeenth century Iceland, Olafur and information about currencies 3. General discussion of the times and beliefs.
All the rest of the book is not wasted time however. I love all the extra information, history and letters. They round out the story wonderfully and questions that arose in my mind listening to the travel book were graciously answered in the appendix.

This is the first book I’ve listened to by this narrator (Bruce Kramer) and I would listen to another. He does a good job narrating. It feels like I’m sitting down in an audience listening to a college professor (an interesting one). I don’t speak Icelandic, but his pronunciations of Icelandic names sounded fluid.

There are no explicit sex scenes, excessive violence or swearing.

I was given this free review copy audiobook at my request and voluntarily left this unbiased review. Please feel free to comment on whether you found my review helpful.

FANTASTIC read on slave trade and life in 1600's

I can't say enough about this book. I seem to refer to this book more times than I can count on my fingers in the last few months with regards to early slavery, raids, early trade, and trouble on the high seas. I am so happy that this book has been translated so that it can move from the dusty back shelves to a more popular read all over the world.

if you've never heard of the barbarossa corsair raid on Iceland, read this book. excellent.
some great history about how slaves were made of normal everyday people by raiders and pirates. great historical reference material here

This book is really interesting, and although it's read at a super-slow pace, it sounds closer to normal if you change the speed to 1.5.

What a fascinating listen! I knew nothing of this event in history, and this was a very well put-together collection, and it told a very tragic and heartwarming story of a group (the Barbary Corsairs) who raided Iceland, killing many and abducting even more to be sold into slavery... .including Lutheran minister Reverend Olafur Egilsson. He writes of his time during this event, including poignant and beautiful descriptions of the people and the surroundings. He struggles with what he sees and how to reconcile that with his religious beliefs.

After an introduction, The Reverend's story is told, followed by the reading of letters written by others caught up in the experience, and those who were able to escape the initial capture, and then more expanded information about the area in question and those who lived there during that period.

This was a very well-rounded book and I very much enjoyed learning about this event. It's definitely a story that should be told, and lessons learned.

I thought the narration was very well done, it really gave the story that extra added effect and I really enjoyed this one. Highly recommended :)

History is truly amazing. One of the most poignant aspects of this book is when the author tells you who was alive at the Same time and what was going on in the rest of the world. It truly allows you to put it in perspective. As well, just the simple fact of the event itself and the journey it entailed are fascinating. When one thinks of pirates and slavers, you think of the Caribbean, and Africa. One doesn’t normally think (perhaps my ignorance is showing) of Algeria, Turks, Europeans and specifically Iceland. The reverends tale also gives one a fascinating perspective on everything he sees from the point of view of his experience and back ground. Things we take as commonplace appear alien, etc. a wonderful
Bonus to the reverends tale is the inclusion of letters from the event and accounts of others who went through the same event. The ability to view the event from these varied perspectives gives one a much better grasp. Truly an enjoyable piece of history to add to my knowledge base. Enjoy. I was voluntarily provided this free review copy audiobook by the author, narrator or publisher

little known documentation of Muslim pirates raiding Iceland and historical context. you might want to skip through some sections but all in all quite absorbing