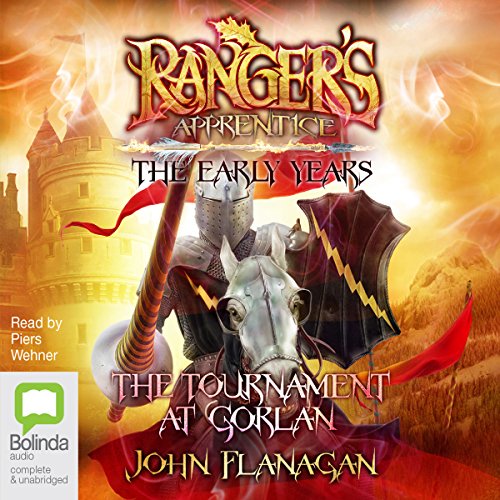 The Tournament at Gorlan: Ranger’s Apprentice - The Early Years, Book 1

By: John Flanagan
Narrated by: Piers Wehner
Try for £0.00

The Ranger's Apprentice origin story fans have been waiting for.

Before they became the most famous Ranger in the land and the hardworking Ranger Commandant, Halt and Crowley were young friends determined to change the world.

The scheming Baron Morgarath is drawing other power-hungry knights and barons to his banner. King Oswald is wasting away, and, if gossip can be believed, Prince Duncan is causing havoc in the north.

Halt and Crowley set out to find the prince, uncover the truth, and reform the weakened Ranger Corps. Once-loyal Rangers are scattered across the country, and it will take determination, skill, and leadership if they're to come together as one. Can the Rangers regain the trust of the Kingdom, or will the cunning Morgarath outwit them at every turn?

What listeners say about The Tournament at Gorlan: Ranger’s Apprentice - The Early Years, Book 1

Although, I really enjoyed the voice of William Zappa from the other Rangers Apprentice series and was initially disappointed. I felt this reader did just as good once I hot used to it. My son and I live this series. Possibly me more than him 🙂

What a fabulous narrator!

Great voice and such detail in the different voices with accents, volume, timing and tembre. A true professional with fantastic musicality and instinct. Loved it!

I loved the story! It was well written. It wasn't rushed, but enjoyable.

It took me a while to get used to the new narrator, I still prefer William Zappa though.