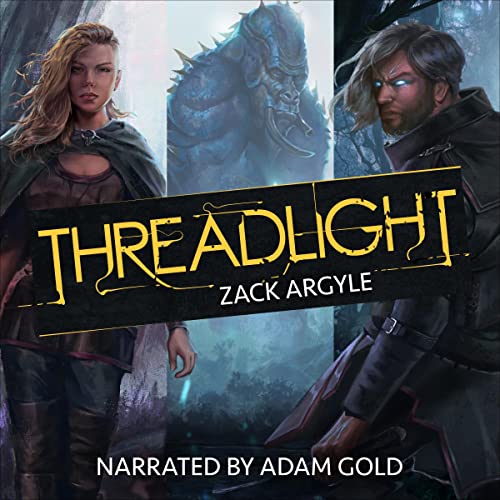 Their child will save the world, if they can keep the damn kid alive.

A protective father with a voice in his head.

A reckless young man whose life changes after he dies.

Together, they will change the world—whether they intend to or not.

What listeners say about The Threadlight Trilogy

I'm sure at somepoint I had already,read this trilogy.
But I really enjoyed this tale.
A tried and tested winning formula. but deeply emersion.
partly due to the voice of Adam gold.

A fantastic piece of fantasy

This story was fantastic. From characters to plot, worldbuilding and scenes of epic proportions, the whole of it was awesome. But honestly, it was the little moments - those the intimate moments between characters and self-reflection - that really drew me in.

There was not a single part or moment that felt askew or too me out of the story. Kris might be one of my new favs, with Willow right behind him. 5/5 for me.

Adam did a stellar job, and with the multitude of character accents, dialogue shifts, emotional gravitas, I never felt like it was jarring or miss-timed.

So many unexpected twists to stretch the imagination. A little bit of a slow start, but it's intrical to the story, so keep reading even if you're tempted to stop in the first few chapters. Narrator is very good. Character voices are unique to each person & consistent. Once the story gets moving it doesn't let up, & the author has an interesting & effective "tension building" ability without you actually noticing until it's resolved. Def a good read.

this male narrator had excellent female voices. i kept wondering if it were a multi reader performance.

the story seemed to borrow various elements from Brian Sanderson

The narration was excellent. The story as well. I really enjoyed this series. And hated for it to end. More than worth the credit.

The story was basic and kind of boring by the narrator completely killed it. So overly dramatic. He might be good for a tween drama or horror novel.

This ranks among the top fantasy trilogies ever written. My review is broken down by individual books.

Voice of War (Threadlight Book I)

This book was really really REALLY great. I honestly don’t know where to begin. Our main protagonists, Chrys, is a fully fleshed out character whose motivations are both relatable and believable. I truly felt his feelings as I read. His affection for his wife, for example, resembled many of feels about my own. Side Question: Is it plagiarism if I steal a few lines for a homemade Valentine’s Day Card? There’s also Chrys’ protective paternal instinct, his love of a child not yet born which is equally powerful. Even his desire to please his superior, who has protected and elevated him to a higher status than he could have ever hoped to achieve on his own. Argyle uses these emotional connections to move the plot to places of danger that might otherwise have been difficult to navigate in a believable way.

Our other main protagonist is a youngish girl named Laurel. She is a bit of a rebel whose life is essentially torn apart piece by piece at the beginning. I felt her frustration, her desire to scream and shout at the silent sky above. Every stable piece of her existence is taken from her until she takes her life into her own hands. Her fiery spirit is palpable and it’s easy to root for her even as her impulsiveness gets her into trouble. These character differences add a wonderful variety to the narrative, though I think either would be strong enough to pull off their own story without the other. Together, they make for an engaging experience rarely found in literature. Seriously, it’s THAT good.

We are introduced to a third POV character, Alverax, a little later on in the story. He is used to great effect to give readers another angle at some of the magical and political happenings that drive a lot of the tension of the main plot. He’s a bit of a wild card. Funny, impulsive with lots of vices, yet he’s extremely likable. He’s the sort of person you sit back and watch, living vicariously through as they do the things no one else would dare. If they fail, it justifies your having not done these things. If they succeed, well, good for them! And it will be entertaining either way! He is a critical weave in the threads that make this story so great.

So this is great, we have three really solid, well-developed characters whose motivations make sense. That’s fantastic. But what about the story? What about the magic? There is magic, right?

A resounding yes to magic! And I’m skipping to the magic because . . . I want to. Threadweaving. If you’ve read enough fantasy, the name alone provides some basic idea of what it likely entails. The author doesn’t have to take up painful pages of exposition to explain how it works. Plus, we see it in action early on in the story and after it’s used a few times, the reader has a general sense of what it is and how it works. It’s based on light, and not everyone can do it, and those who can have a higher status within society. Threadweavers can push and pull on the threads that connect everything so things like jumping really high, or softening a landing after leaping from a building, or tying someone to the ground with threadlight are all things that can be done. It felt very intuitive to me as I read. As the story progresses we learn more about the cost of threadweaving, the rules, etc. Additionally, there are hidden layers within these rules of nature. Secrets lost in the past, and bad guys tampering with the ethical boundaries in search of bending and breaking these known rules. This makes for lots of fun plot twists and tension.

The story. There are lots of different types of storytellers. Based on my listening to Voice of War, I would classify Mr. Argyle as the architect type, which after reading his bio, makes total sense. Every single detail fits right where it should, events unfolding right where the tension leads them. If some stories are a garage band, this is an orchestra. There is a grace and flow to the events that can only be described as genius design. And I think that’s what makes this story such a breath of fresh air for me. It checks all of the boxes, then goes above and beyond. The story is masterful, complex, with overlapping storylines that converge in a spray of action.

Two powerhouse fantasy series that most closely resemble this in quality and style would be Brandon Sanderson’s Mistborn, and Brent Weeks’ Lightbringer.

The character arcs for Chrys, Laurel, and Alvarax were different from what we saw in the Voice of War, and yet all were compelling. Stones of Light takes us deeper into the history of the ‘gods’, we see variations in what is possible for the established magic (threadlight), and learn that the heralds of old may not have been what people in this world are taught to believe. I could feel the struggle of each protagonist, and what I enjoyed most was Argyle’s ability to take a villain and humanize them, turning them into more of a grey character. I enjoy stories where heroes and villains are forced to team up out of necessity. This tension we feel whenever our heroes are working with the person we previously despised keeps a story interesting and real.

Something many of my favorite epic fantasy authors include in their stories is well-placed lore that ties into the story at hand. An old blind guy who knows more than he should, or the isolated tribe of people who have passed down oral stories that turn out to be at least partially true. These little clues from the past help the characters and the reader prepare for what is to come. The best of these nougats sometimes even facilitates one or more major twist. An established author who I think does this particularly well is Michael J. Sullivan and I make no secret that he is one of my favorite authors. Argyle is now in this category for me.

This review is brief because at this point, Argyle is mostly just building upon the foundation he laid in the first two volumes of the trilogy. This is a good thing. I applaud the author’s restraint in keeping some of the secrets about the certain pivotal events hidden for so long! The payoff was significant. Without giving much away, I’ll give a few generic expectations: We see sacrifice of the greatest sort, unlikely alliances brought together against the terrible might of the Heralds and their minions, and as satisfying an ending as readers could have hoped for.

So as much as I did not want this series to end, I am happy with the way it did. This was a well-designed story from start to finish with some excellent twists and triumphant stages of character growth. I stand by my previous Mistborn comparison, though I think those few readers who find Sanderson a bit tedious at times (I am not among them) will not feel this way about Threadlight. This series will stand the test of time.

I have to add that the narration is PERFECTION. Adam Gold’s voice is deep, rich, and versatile. I could listen to him read books all day. His performance brings out the best in this story, making the experience all the better!