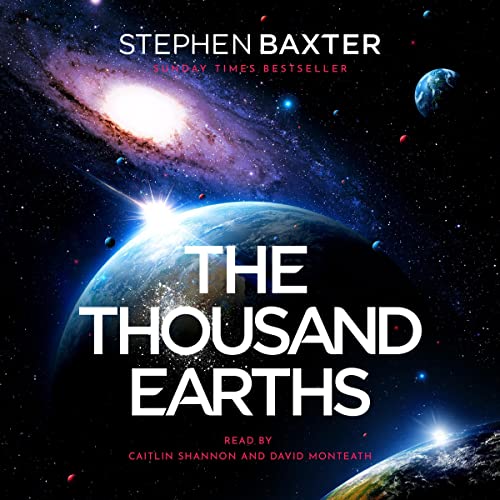 By: Stephen Baxter
Narrated by: Caitlin Shannon,David Monteith
Try for £0.00

Hackett, in his trusty ship the Perseus, is not just a space traveller—beginning his travels with an expedition to Neptune and back—but, thanks to the time-dilation effect, a time traveller as well. His new mission will take him to Andromeda, to get a close-up look at the constellation which will eventually crash into the Milky Way, and give humanity a heads-up about the challenges which are coming.

A mission which will take him five million years to complete.

Not only is Hackett exploring unknown space, but he will return to a vastly different time.

Mela's world is coming to an end. Erosion is eating away at the edges of every landmass—first at a rate of ten metres a year, but fast accelerating, displacing people and animals as the rising Tide destroys everything in its path. Putting more and more pressure on the people—and resources—which remain.

She and her people have always known that this long-predicted end to their home, one of the Thousand Earths, is coming—but that makes their fight to survive, to protect each other, no less desperate . . . and no less doomed.

A beautiful, pause-resisting story which interweaves the tale of these two characters, separated by both space and time, in a hopeful exploration of humanities' future, this is Stephen Baxter at his best.

What listeners say about The Thousand Earths

Not Baxter's best but worth a listen

I have read/listened to all of Mr Baxter's books and for the most part enjoyed them all. His favorite book of mine is Evolution for which unfortunately I am unable to find an audio book version of. Would love to see Audible bring that wonderful book to audio for us!

Pretty amazing story encompassing more sci-fi than I've probably ever seen. But it's really two separate stories in one book - one amazing and one dull. The book would have been top 5 ever if the dull story had been told in just a few chapters.

this book turned out to be quite a pleasant read, I highly recommend it.

Two tales coming together after a long time

Stephen Baxter's The Thousand Earths tells two tales that come together at the end of time. In the first, a crew on a five million year mission to the Andromeda galaxy is sabotaged with only a single survivor. He returns to Earth finding a very different humanity where his sense of exploration is at odds with current mores. He then proceeds to go further into the future, now into billions of years. At the same time, the other tale is the basis of the title. On one of those 'earths,' the world is coming to an end in less than 30 years. While a bit more primitive than today, their culture wars play out between two opposing factions. What ensues is a gradual immigrant / asylum seeker morality play as their world slowly disintegrates. Eventually, at the end the two strands come together.

Baxter really extends the timelines with humanity surviving for billions of years with the result being post-biological consciousness and boredom. The thousand earths is seen as a sort of science project where one of the worlds takes it all too seriously and polarizes the culture into two camps. It is almost as if humanity itself creates life as a simulation for idle pleasure.

The narration is well done with a wise decision to engage two narrators for the separate strands.

Stephen Baxter is probably my favorite writer of hard science fiction so I was excited to see that he was releasing his new book in September 2022, and I grabbed it on Audible the minute it was available. Baxter is a master at writing about human struggles in a dystopian future, with plots supported by speculative and known science, on an epic scale and in incredible settings. If you are looking for deeply developed characters you might be disappointed. Big mind-boggling near and far-future concepts and human trials and tribulations take the forefront like in so many of his other stories.

In this novel, we have two separate plots each centered around a main character which eventually come together (not a spoiler as the chapter sections named after each of the characters eventually include both of their names). On one hand we have a fellow named John Hackett who in 2145 AD travels with his crew on a forty year mission from Earth to the Andromeda Galaxy (which will eventually collide with our galaxy (really)) and back in an advanced ramscoop ship the Perseus to study its nature and look for intelligent life. Since they will be traveling at extremely fast speeds the crew knows that the earth will have aged millions of years during the mission due to time dilation. After an accident takes the lives of Hackett’s crewmates he becomes a sole explorer and returns to the far future Earth on his own. He decides to back out and his next journey begins.

In the second storyline we have a young person named Mela who lives with millions of other humans on a far-future engineered planetoid modeled after Earth. From her vantage point she can see thousands of such “earths” in the night sky, each with their own mini sun. Unfortunately for Mela and the rest of the inhabitants living on this planetoid, it is gradually disintegrating and the scientists determine that the entire world will succumb to this process in 30 years or so. Despite living in the far-future on a seemingly advanced and highly engineered planet, Mela’s society has devolved in to a sort of medieval hierarchy, ruled by the powerful and violent. Mela and her family are aware of their ultimate fate, and Mela goes through life knowing that her lifespan is limited. Her storyline basically covers her life from a child to the end of the 30 year period.

The mysteries in this novel therefore are: what is going on with Mela’s world and her solar system, and what will become of her and its inhabitants; and, what will John Hackett find in his travels, which end up spanning billions of years with repeated stops at future Earths. And finally, how do Hackett and Mela’s timelines eventually converge?

This is a chunky book- about 17.5 hours of audio. I was hooked from minute one. It was narrated by British actors Caitlin Shannon (Mela’s story) and David Monteith (Hackett’s story). They were both excellent narrators but the one quibble I have is that David’s voice sounded too young for the Hackett story (Rudnicki! Rudnicki! Rudnicki!). But nothing in production could damper my enjoyment of this epic tale. This is one of my favorites of his novels.