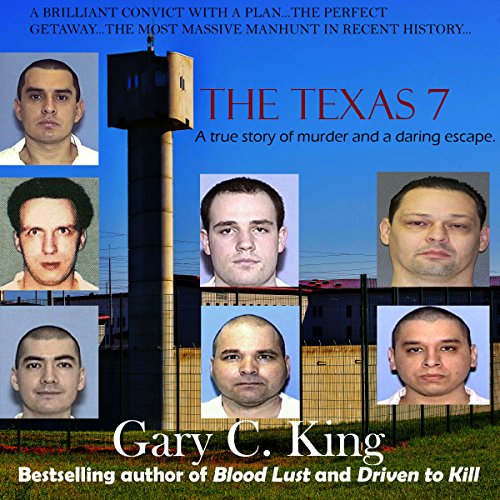 These were chilling words on a note left behind by seven armed and dangerous inmates who escaped from the John Connally prison in South Texas on December 13, 2000. Their promise has apparently been fulfilled. The inmates, now known as the Connally Seven, are suspected of having first robbed a Radio Shack in Houston, and then, days later, on Christmas Eve, of having fatally shot and run over a young police officer during an assault on a Dallas sporting goods store. For six frantic weeks, a massive manhunt with a significant reward had only turned up dead ends - until a tip came in from someone who had seen the gang on Fox TVs, America's Most Wanted. Authorities arrested four of the seven prisoners, including suspected ringleader George Rivas, in Woodland Park, Colorado, and a fifth inmate shot himself during police negotiations.

Immediately intensifying the search for the last two heavily armed and dangerous prisoners, police and the FBI closed in on them at a Holiday Inn in Colorado Springs, just two days following the previous arrest. After five hours and a telephone interview with a TV news station, in which they expressed their feeling that the breakout was a statement against Texas's judicial system, the two inmates surrendered themselves, putting an end to a long and frightening episode.

The Texas 7 goes behind the scenes to give you a detailed, fascinating account, of the events leading up to and after their brazen prison escape - and the exciting chase that ultimately led to their capture.

What listeners say about The Texas 7

An engaging true crime audiobook about the escape of seven inmates from a Texas maximum security prison. The narrator did a great job of bringing the story and characters to life, you could picture the scenes in your head and was a clean, crisp recording. The author gave plenty of detail making it was an interesting and entertaining account.

True Crime has always been my favorite when it comes to reading. I do not remember ever hearing about The Texas 7 and found the information given very interesting. It was really great to get a feel of each man and his background. It was interesting to see how their mind work and the reasoning behind why they did what they did. I can understand no hope of getting out of prison but I cannot feel for them. They choose to do what they did and why they thought they should be able to get out early is beyond me. Do not break the law or do the terrible things they did and they wouldn’t have to worry about it.

Mr. Bennett as always was wonderful I love his character voices. He puts delightful emotions into his audio even with books of this nature. I had no trouble picturing the scenes the author wrote as the narrator bought it to life almost like a movie. You can tell he put a lot of thought into how he would deal with issues and how the audio would play out. There is no repeating of wording, no volume change, if any breaks were taken I could not tell. It was a very clean and clear audio that I got lost in from the danger that felt almost like a movie. I thought his performance great and really added a lot to this audio.

I was hooked from the first page as the author gave a very interesting account of these men’s lives. The law was always one step behind until the day they were arrested. Funny how things work out if they had awaited one more day or even an hour they would not have caught the whole gang or maybe none of them at least not that day. The way these 7 minds worked I found surprising, I don’t understand how they thought they could live a normal life just by changing their names. But then again they did stay on the run without people working out who they were for a long time. The authors writing kept me very entertained, I thought he gave a lot of thought to the information he gave us giving a full account that was very interesting.

I have listened to several true crime books written by Gary C. King and I would definitely recommend all of them. His books are well researched and written with great detail. His narrators are also easy to listen to.

What does J. Scott Bennett bring to the story that you wouldn’t experience if you just read the book?

I thought he did a fantastic job reading this book. He was so easy to listen to and his voice was perfect for this type of book.

This is a compelling account of the notorious prison escape of the Texas 7. It jumps right into the action on the day of the escape, detailing how the guards were overcome and the escape itself accomplished. Perhaps the most interesting part of the story was the prisoners' extended evasion of authorities and the crimes they committed while on the run. There was a definite feeling of impending disaster, since most of the 7 escapees knew they were never getting out of jail again and would appear to be willing to do whatever it took to extend their escape. With that firmly established by the author, I found myself almost wincing in anticipation of something even more awful occurring whenever the narrative followed the escapees into an interaction with an unknowing civilian. Sadly, something awful did occur.

The narrator was perfect for the material, rolling out the story at a compelling pace in a gentle southern accent. It was almost like sitting in a bar or restaurant listening to a friendly Texan tell the whole story over a rack of ribs. I would definitely listen to other books narrated by J. Scott Bennett or written by Gary King.

The story is primarily told from law enforcement's perspective, which is interesting. But I would have loved more detail from the escapees perspective, and perhaps a bit more on the trials. I was left wanting to know what these guys were doing the whole time, where they were staying, who they encountered, what the internal conflicts and power dynamics might have been. It didn't lessen my enjoyment, and I like when a true crime story is engaging enough to make me want even more detail. On the other side of the coin, I was taken a little aback by a number of Appendixes in the last 40 minutes of the book. I understand why they were there, but that kind of repeated, extensive detail coming after the narrative is over and the author thanks all the people who helped him research and write the book feels a little like overkill.

That said, this is a great true crime story written and narrated in a compelling, interesting way. If you're even a little interested in true crime or in this particular case, I would definitely recommend this book. A review copy of this book was provided by the publisher at no cost in return for this unbiased review, but after listening to it I can say that if I had bought it I would have been very glad I did.

This true story is about seven criminals they're planning and execution of a break out from a maximum-security Texas Prison and The ensuing manhunt. The seven daring criminals capture the headlines in the late 90s with their escape and persecution of the Texas penal system. The author conveys the story with the well tall narrative has been thoroughly researched and provides all the information to create a true chilling tail. The narrator does a wonderful jobin the delivery of the story.I was voluntarily provided this free review copy audiobook by the author, narrator, or publisher.

I remember when this happened and I don't live too far from that area.. Talk about scary times.. Its interesting to know the details of the mind baffling prison break..
highly recommend true crime !!
"I was given this free review copy audiobook at my request and have voluntarily left this review

This is a fascinating account of the December 2000 prison escape of seven dangerous inmates from a Texas prison and the massive manhunt that followed. Having lived in Texas at the time this happened, I found this especially interesting. The book provides many behind the scenes details that were not part of news accounts at the time.

The narrator is also very good. His voice has a nice Dan Rather quality to it.

This audiobook kept me riveted throughout and led to an ultimately satisfying conclusion.

*This book was given to me for free at my request and I provided this voluntary, honest review.

I enjoy reading true crime stories that are told chronologically and with detail about how the crime was planned. The author and narrator made you feel you were observing the crime as it was happening in the news.when it took place.I would recommend to a friend. I was given this book by the author for a fair review. I enjoyed the story, thank you.

This is my first true crime audiobook and won't be my last. This story had me hooked from the beginning and googling more about the story when I was done. This was super interesting and a really exciting story that had me on the edge of my seat. Perfect narration! I can't wait to listen to more by both this author and the narrator!

Where does The Texas 7 rank among all the audiobooks you’ve listened to so far?

In the true crime category it ranks among my top five.

It was well researched, perfectly paced, clearly written and didn't contain a lot of filler. I was completely enthralled during the whole audio book. Kudos to Gary King for a great true crime book!

I liked hearing how the seven were located and recaptured.

When the police officer was killed, I felt bad for him and his family.

As much as the book itself, the narration by J. Scott Bennett made this book a home run. He's a terrific narrator, I could tell he understands what he's reading and his voice is very easy to listen to. I couldn't believe how fast the time went when listening. I hope to listen to more books narrated by him.