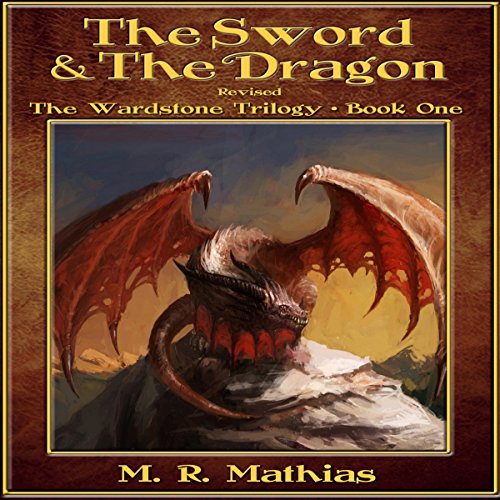 The Sword and the Dragon, Revised

When the Royal Wizard of Westland poisons the king so that his puppet prince can take the throne and start a continental war, a young squire is forced to run for his life carrying the powerful sword that his dying monarch burdened him with from the death bed.

Two brothers find a magic ring and start on paths to becoming the most powerful sort of enemies, while an evil young sorceress unwillingly falls in love with one of them when he agrees to help her steal a dragon's egg for her father. Her father just happens to be the Royal Wizard, and despite his daughter's feelings, he would love nothing more than to sacrifice the boy!

All of these characters, along with the Wolf King of Wildermont, the Lion Lord of Westland, and a magical hawk named Talon, are on a collision course toward Willa the Witch Queen's palace in the distant kingdom of Highwander. There the very bedrock is formed of the powerful magical substance called Wardstone.

Who are the heroes? And will they get there before the Royal Wizard and his evil hordes do?

Whatever happens, the journey will be spectacular, and the confrontation will be cataclysmic.

What listeners say about The Sword and the Dragon, Revised

I couldn't even listen for more then 10 minutes. I skipped through the book and it was terrible narration throughout.

What made the experience of listening to The Sword and the Dragon, Revised the most enjoyable?

Clearly narrated with good diction. The narration could have been more dynamic at times but fortunately the character's voices shine through. Dialogue is a definite strength in this book and it comes across strongly in the audio version.

It was great revisiting this story and being able to lie back and listen to the narration. Love the opening cliff scene.

What was one of the most memorable moments of The Sword and the Dragon, Revised?

Without giving away spoilers, the Loudin kite scene.

Sprawling epic fantasy written with a deft hand and an eye for the little details that make the characters -- even the non-humans -- recognisably human. Mathias has a knack of surprising the reader with twists and turns and character foibles.

What would have made The Sword and the Dragon, Revised better?

Another person reading it without the stilted, monotone voice

Who would you have cast as narrator instead of Chris Dorman?

Anybody would be better than this!!!!!

What character would you cut from The Sword and the Dragon, Revised?

I wouldn't know. I couldn't listen to more than 15 minutes of this audio due to the lousy narrator.

The story is so much better than the narration

I was intrigued by the reviews. I wanted to like this reading but only a few minutes in I can't listen to the narrator anymore. It's just awful, monotone dreck. I found the kindle version is only a buck. Complete waste of my credit. Read it yourself, you'll do a better job.

Would you try another book from M. R. Mathias and/or Chris Dorman?

Has The Sword and the Dragon, Revised turned you off from other books in this genre?

Here's the deal, his narration for voice characters isn't terrible, just the narration between characters. He sounds almost like a computer narration.

I think this book would be better if you read yourself instead of had to listen to it.

Great Book, But Will Book 2 and 3 Be made in audio

What does Chris Dorman bring to the story that you wouldn’t experience if you just read the book?

I really like the book. At first the style of Mathias writing confused me. He would go from one persons view point to anothers in a blink but I cuaght on quickly. The story was great and if you like fantasy you will like this book. I hope they don't do what has happened with a couple other books. Put out the first one and then no more are made. For a person who gets 2 credits a month and buys more one top of that I feel cheated. Please bring us the next two books!

This is wonderful. Listen to the free sample!

Would you consider the audio edition of The Sword and the Dragon, Revised to be better than the print version?

This is a grand listen. I used to buy from a different audio book retailer, but maybe I will start listening here. This was well narrated and as I read the story (for the 4th time) along with the audio. I once again fell in love with Mathias' characters. I simply can not wait for books two and three of this series to be available. They are my favorite fantasy series of all time.

The characters are so relatable and fallible.

The narrator has clever voices for the witch, the characters, and even the dragon at the end.

The first two times I read it I cried. One of my favorite fantasy characters of all time dies in this book and it is heart wrenching.

Mathias has climbed over a lot of indies on his rise to the top. Expect many of them to be bitter and small. Just listen to the free audio sample and judge for yourself. So many people have an opinion about Mathias, but that is what happens when you get famous.

Why can you not give a rating of zero?

What made the experience of listening to The Sword and the Dragon, Revised the most enjoyable?

The book narration was so bad, after 30 minutes of listening, I had to pull my ear buds out or go mad!!! I liken it to having a nail stuck in the tread of a tire as you drive on a hard surface road. I had written a lot more, but on reflection decide to be nice. On the other hand, when you order steak and are brought a hot dog, you may offer an opinion.

The answer is explained above.

One of Top 10 Indie Fantasy stories in audio! Yes!

Yes, FINALLY - the great M.R. Mathias is in audio form! I can understand why he wanted the talent of Chris Dorman, an animation voice artist to narrate this story - Mr. Dorman can certainly do great character voices.

However, the narrator parts were alittle stiff - but being this is Mr. Dorman's first audiobook, he will hopefully get better as he goes along :-)

But even so, the strength of the story and its many wonderful characters made this still a great entertaining experience for me, just like reading the book did.

If you could sum up The Sword and the Dragon, Revised in three words, what would they be?

It is so hard to think of just 3 words to describe this amazingly written story but let's go with magical, fun and thrilling :-)

What was one of the most memorable moments of The Sword and the Dragon, Revised?

This is such a masterpiece of imagination and high adventure, I cannot pick one particular moment that is more memorable than another. I love Claret and the sword Ironspike (yes, the sword has a name :-))

I liked how Shaella, the beautiful daughter of the wizard, keeps things interesting for the main heroes ;-).

Pael is such an evil, evil wizard - I'm so impressed with the author in making all the characters (heroes and villains alike) seem so real with their thoughts and feelings.

I did feel really sad at times - people do get killed off, but I actually liked that nothing in the story is sugar coated. It's a real adult story!

Kudos to Mathias for bringing his best selling story into audio - hopefully the rest of his great writing will also be put into audio form :-)