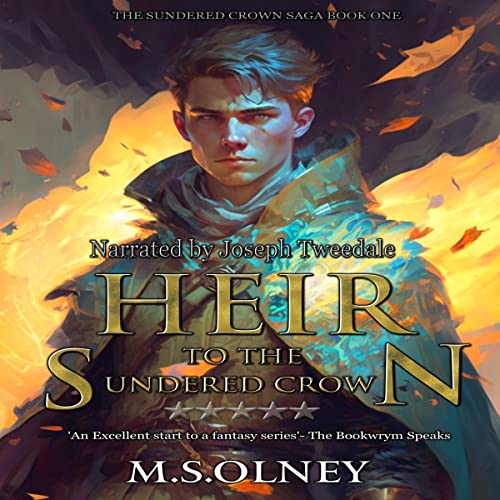 Heir to the Sundered Crown

By: Matthew Olney
Narrated by: Joseph Tweedale
Try for £0.00

A realm torn asunder by civil war will give rise to a hero.

The Kingdom of Delfinnia is in chaos. After assassins kill the king and his family, greedy self-serving men battle one another for the crown. Unknown to them is that one heir yet lives, a baby boy now hidden and protected.

In the mage city of Caldaria is a boy named Luxon. A young mage who will discover his past and his powers. For he will one day become known as the Legendary, the wizard who would break the world, the man who would embrace death and live and the hero who would give a realm its greatest king.

Sent on a quest to find the one responsible for the King's assassination Luxon teams up with Ferran of the Blackmoor, the legendary Nightblade and hunter of fell beasts, Sophia Cunning, the land's greatest witch hunter, and Kaiden, a noble knight sworn to defend the world from darkness.

Together they find the answers they seek, but the truth is far worse than anyone could possibly imagine.

The Heir to the Sundered Crown is a fantasy tale that will ignite the imagination and set the stage for an epic battle between the light and the darkness.

What listeners say about Heir to the Sundered Crown

Excellent start to a an Epic Fantasy series...

As a fan of fantasy, I find it amazing the amount of choices we have when it comes to books to read. There is literally something for every taste. Sometimes, though, I just feel in the mood for a more traditional type of story, with clearly defined heroes and villains, epic quests and a fight to stop the forces of darkness from taking over and destroying the light.

That's where Heir To The Sundered Crown by M.S. Olney comes in. It has that old school feeling of good versus evil, while adding in a few modern touches of realism. While the world building is strong with this book, its much more character driven, and that starts with Luxon, the main focus of the book. In the kingdom of Delfinnia magic banned in any place but Caldaria, the mage city. Luxon is an oddity, a wizard in a land of mages. He is in touch with his magic instinctively, and doesn't need to use ritual or spells to use his magic, unlike the mages, who require specialized training to access the magic. Luxon's life situation has also had some consequences on his life, as his father was executed by the barons when he swore that when the entire royal family was assassinated that the youngest price escaped. Considering a live heir invalidated the six baron's claims, he was branded a lying traitor and executed to shut him up, disgracing his family in the process.

This is what Luxom has had to live with. It informs his decision making throughout the book as he joins a group of allies in trying to defeat an ancient evil, an evil so bad it still frightens people centuries later. Its fun watching his growth from awkward youth to confident young man with unique power. He is well complimented by a varied cast of supporting characters, including his friend Yeppert, a mage student with surprising strength of character and will, Sophia, a Witch Hunter, Ferran, a Mageblade, those tasked with defeating monsters, and Kaidan, a knight of Nivarin, the order that keeps rogue mages from causing trouble. They all have interesting back stories and get lots of development throughout the story. Definitely not cardboard cutouts.

There are no shades of gray in the villains. Danon is an ancient dark wizard thought dead with the defeat of his dark god, but his return with dragons disproves that. His magic is well beyond what any current mage can do, and there's only one possible check to his power. Cliria is the other villain, a power ful witch, the partner and lover of Danon, and she has spent centuries arranging things to make his return possible. Her reveal is one of the best moments of the book, as things really start to unfold from there. Their motivations aren't justifiable as anything other than a lust for power, and it's kind of a refreshing callback to villains of the past. The characters really add some flavor to the mix.

The narration is handled by Joseph Tweedale. I was unfamiliar with his work before listening to this, but I was impressed with his voice work. He managed to create young sounding voices for the mage students, but also a wide range of adult and older voices for various other characters. He even put an excellent spin on a dragon's voice. He creates unique voices for each character using various tones, accents and cadence changes, all while avoiding dropping into a monotone during the narrative portions. I look forward to listening to more of his work.

As I stated, this book has an old school sensibility which I really enjoyed. None of the anti hero or conflicted villains we see in so many books today, just characters that are generally good trying to stop the plans of truly evil villains. Its an engaging story I think any fan of fantasy can find something to love. I highly recommend it.

I was completely blown away by Heir to the Sundered Crown. This is one of the best fantasy novels I have come across in years. Mathew Olney has given us a wonderfully created world and well rounded relatable characters. Knights, kings, mages, witch hunters, witches, wizards, dragons, and much more inhabit this magical realm. Joseph Tweedale did an amazing job narrating the audio book edition. I can't wait to see what happens next. Mathew Olney will definitely be an author I follow.