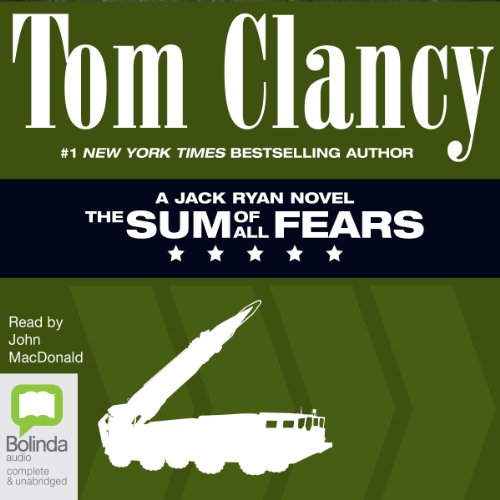 The Sum of All Fears

By: Tom Clancy
Narrated by: John MacDonald
Try for £0.00

Peace may finally be at hand in the Middle East - as Deputy Director of the CIA Jack Ryan lays the groundwork for a peace plan that could end centuries of conflict. But ruthless terrorists have a final, desperate card to play: They have their hands on a nuclear weapon and have placed it on American soil in the midst of an escalation in tension with the Soviet Union. The terrorists hope to rekindle cold war animosity and prevent reconciliation between Israelis and Palestinians. With one terrible act, distrust mounts, forces collide, and the floundering U.S. president seems unable to cope with the crisis. With the world on the verge of nuclear disaster, Ryan must frantically seek a solution - before the chiefs of state lose control of themselves and the world.

"He constantly taps the current world situation for its imminent dangers and spins them into an engrossing tale." ( The New York Times Book Review)
"Heart-stopping action ... entertaining and eminently topical." ( The Washington Post)

What listeners say about The Sum of All Fears

Pretty sure this is being read by a robot

I would give more information but the narration has put me off. I have managed 5 minutes and have lost the will to live.

First to have to say, this is a fantastic book. Unfortunately it sounded like Stephen Hawkins was reading it. It’s the first time I’ve heard such poor quality from Audible. Hopefully I won’t again.

Who decided this was ok to release?

This may be an unfair review as I’m only 2/3 of the way through the first chapter but felt compelled to write a review and share the pain I’m sure many others have felt!!

When I first started listening to this title I instantly had to check who the narrator was. Having gotten used to the smooth tones of Michael Pritchard in prior Tom Clancy books I thought that Bolinda may have given Steven hawking a go at reading this one! I am going to stick this one out as the rest of the books I have listened to (starting with the John Clarke series and then on to the Jack Ryan universe) have been very enjoyable hence the overall rating I gave this. I’m sure the story itself will be brilliant hence the story rating but wowzer is this difficult to listen to! It’s not so much reading a story, it’s more like just reading words from a poorly structured sentence.

Poor form from Bolinda for releasing this title in this state, it’s going to be an arduous 33 hours!!

the worst narration ever

I loved the book. but this narration is like listening to a mid nineties Microsoft office voice.
it's terrible. nasal. metallic. just awful

Such a great book but john macdonald ruins it

I’ve read the book, watched the film currently listening to this after 3 other Tom Clancy books and this is just horrible to listen to the voice sounds slurred or stoned and so you can’t hear the crispness which makes listening easier, his voice is slow and monotone the worst story teller I have ever heard!! Awful what an absolute shame as I was really looking forward to this.

Alexa has more range in her voice than John

I read the original book when it first was published and am now working my way through the series as audiobooks to refresh what happened to who and where.
This book was yet another great story and it's interesting to read the plots now that technology has moved forward some what.
However it was a bit long winded in places and I struggled slightly with the scene changeover from one part of the story to the next as the narrator didn't pause long enough and sometimes it was quite confusing however I did enjoy it overall and would recommend it to others

I’ve read all the original Clancy books, probably more than once over the years but am trawling through the Ryan series again on Audible. I’ve seen several reviews on here saying this narrator was ‘un-listenable’...& I wasn’t too keen when I first heard him either! Stick with it...as you get used to his tone, it’s actually pretty good however I would say he needs to get his pauses better between opposing voices in a conversation
As for the story, top class as always from Clancy. If your only exposure to this story is the very poor movie, then your in for a great ride

I love this books but unfortanately the narrators aren't that good. So far Scott Brick is the best, Michael Pritchard is alright, John MacDonald is just dull and Lance C Fuller id just awful.

I enjoyed listening to this audio book. Tom Clancy's books are always a good listen.

Give it a miss. Bolinda buggers it up again

One of the worst narrator's I've heard, sounds like a robot, almost no variance in his voice. obviously the recording wasn't checked as in the first chapter they reference the KBG, not the KGB.
last time I buy a book from the Bolinda group which is a shame as they seem to have the rights to a number of Clancy's books in Australia

Lots of details for the "fans"

What did you love best about The Sum of All Fears?

I love the way Clancy always acknowledges his readers are intelligent enough to manage several "back" stories. He doesn't have to step you through the characters, they are so well written you don't need reminders or prompts. The Sum of All Fears is just such a story.. Clever, well proportioned and credible characters.

What other book might you compare The Sum of All Fears to and why?

Matthew Reilly gives the reader the same impression of deep research. and having done same wants to share every morsel with the reader. I feel I'm not just being entertained I am learning... Very satisfying experience

What does John MacDonald bring to the story that you wouldn’t experience if you just read the book?

Nice to hear someone who can read without taking breathes and gasps midsentence (like Lou Diamond Philips) this destroys the story. I have sought out and listened to more McDonald and he is good.. Wish he could re-read all the ones Phillips has mutilated..

Almost as good as Patriot Games

As with a lot of Tom Clancy it takes a while to wind up and has some very slow portions but that's the price you pay for a well developed story. Well worth it. Best Narrator so far on the Jack Ryan series.

A book of nuclear proportions

Where does The Sum of All Fears rank among all the audiobooks you’ve listened to so far?

The fact that Tom Clancy was brave enough to let the bomb explode.

The terrorists, drug cartel and Cutter getting their comeuppance.

The sheer length of Tom Clancy's books prevents reading in one sitting.