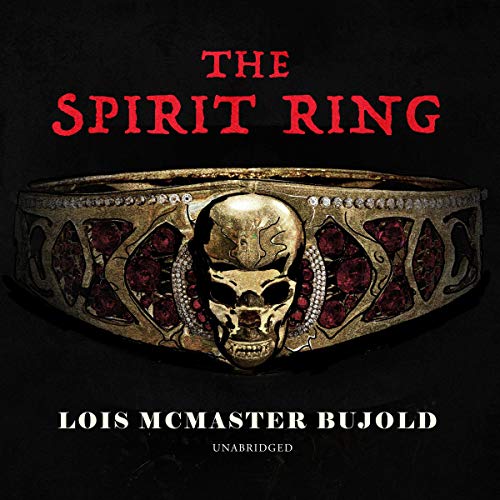 By: Lois McMaster Bujold
Narrated by: Grover Gardner
Try for £0.00

In an alternate Renaissance Italy where the church regulates magic and licenses magicians, fiery Fiametta Beneforte wants to be more than her goldsmith-mage father's unpaid apprentice. But when the Duchy of Montefoglia is laid under military and magical siege, she unexpectedly must join with Thur Ochs, a young Swiss miner and foundryman, to tap their skills in both metalwork and necromancy to rescue her father's soul and combat an evil sorcerer.

What listeners say about The Spirit Ring

I quite liked the original reader of this book, but was so excited to hear that a new version was coming out with Grover Gardner narrating.

It's fabulous. I've always liked the Spirit Ring, but with Grover reading it lifts it from a good book to a really great book. More similar to the Chalion books than the Vorkosiverse, though actually standing alone in its own little universe.

This was a pleasant surprise. Very good story well narrated by Grover Gardner. A fantasy mix of magic violence and romance in Italian Renaissance

This book is closest to Bujold’s World of the Five Gods books in that they include spirits and magic, but it’s definitely a complete stand alone.
Fiametta has been an unofficial apprentice to her father, Master Beneforte, a goldsmith, sculptor, and Mage; until the Duke of Montefoglia, his patron, is murdered by the evil Lord Umberto Ferrante.
Thur has left behind the mines of Bruinwald, Switzerland to become an apprentice, but finds out Master Beneforte has been killed. Separately and together, Fiametta and Thur help stop Ferrante and his evil Mage-Secretary Vitelli.
High Quality writing and narrating, but Low Quality production. Unfortunately, my copy of the audiobook was flawed - it had several sections that were repeated, the last of which was Chapter XVIII, which repeats after 44:13. Hopefully Audible will get this corrected.
The story itself gets a definite recommend.

The narrator is the same one for the Vorkosigan series. And with the same intonation and mannerisms, not changed a whit for this series. This made it very hard to concentrate on the story because I kept expecting Miles to lurk around the next word.

Still struggling to get through this book but it extremely difficult to stay interested with this narrator. He reads like an evil wizard in a really bad fantasy movie.

Narrator is not for everyone

Not bad one-time read story with rather basic characters and some great scenes (a flaming moving bronze statue was good) but from my personal point of view and voice perception, it would have done better narrated by somebody else. I can do nothing about it - to me Gardner's voice sounds like a scratchy, querulous and pompous voice of a very old man. Quite unpleasant, actually and the reason I usually do not buy books by this narrator (prizes, winnings and laudations notwithstanding.)
I believe somebody with a more soft and down-to-earth manner would have been better for this one.

Good but there are 2 spots that the story repeats

Good but there are 2 spots that the story repeats. The recording is flawed in that places in the storyline repeat and each is longer than a few minutes. The second is in the last hour of the audiobook. I wish I could have given a better overall rating.

Narrator not the right choice for book

I love this author, but the narrator selected for this book was not a great choice for this young adult book. He just could not convincingly be the young woman who was the main protagonist. It is truly unfortunate, as I was very much looking forward to the book.

Absolutely everything that she writes is awesome.

Lois McMaster Bujold has a ton of books out there and all of them are awesome. Grover Gardner does a great job with narration on everything he does too. I'm so glad the two of them were paired together to bring these audiobooks to life.

A great story and performance but the chapters that are listed as an hour long are actually 1/3 material that was already performed within the same chapter.

This is the first Lois McMaster Bujold book I’ve ever listened to or read and I loved it! I will be devouring her selection.
This book is so wonderfully creative and the fantastical/ magical components are so effortlessly blended into the historical setting of the Italian Renaissance as to feel completely natural yet exhilarating. She took a realistic setting from the Italian renaissance and enhanced it with fantasy. The magic in this book is delivered through the exhilaration an artist feels when creating a work of art. Super cool angle and way to express magic and creation. Very integration story and Grover Gardener is a phenomenal voice actor.