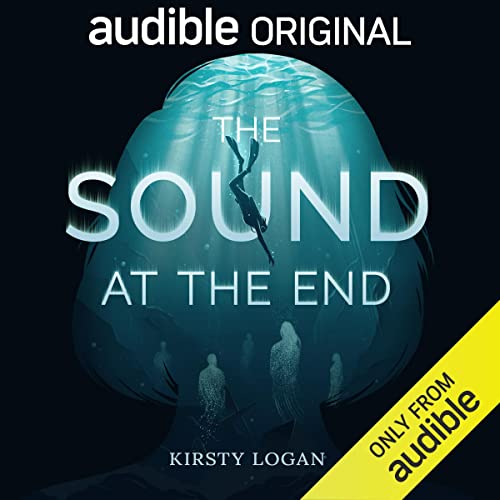 The Sound at the End

A chilling, immersive audio experience, The Sound at the End follows the eclectic crew of an Arctic research base and the newcomer who may uncover the secrets they’re each desperate to outrun, written by award-winning novelist Kirsty Logan and performed by a full cast.

On a near-abandoned research base in an Arctic ice field, a skeleton crew works to ensure the centre doesn’t collapse amid treacherous storms. Officially, Trieste Grayling arrives in order to explore and film a sunken shipwreck for a documentary film; privately, she's working through a complicated grief. Trieste soon realises she's not the only one who was attracted to this intense isolation in order to escape her ghosts.

Each of the crew members harbour dark secrets: Mal, the ever-competent medic conducting mysterious therapy sessions, Sweetie, the reclusive engineer with scarred hands, Thorsteinn, the aloof diver tender, Avelina, the temperamental base manager whose stories of home don't quite add up, Grace, an underwater welder and recovering addict, and Judd, the erratic former member of a ‘90s boy band. As they begin to reach breaking point, each one's hidden ghosts finally comes into the light.

What listeners say about The Sound at the End

Too much narration and not enough drama

This had such an intriguing premise but I gave up midway through the second chapter. The first chapter was one long narrated exposition dump using a rather lazy device of a character orally recording their thoughts. It was as if the writer didn't know how to write for the audio format or the basics of actually writing drama which is to show not tell by gradually revealing information through character interaction and creating dramatic tension. But when some characters did actually speak to each other it soon cut back to the main protagonist recording herself. Maybe there turns out to be some point to how it is constructed but I can't be bothered to listen for 10 hours to find out. Someone should have stepped in before recording commenced and asked for major rewrites. A massive shame and disappointment.

Brilliant writing and the performance was chilling.

This is a story I'll be thinking about for a long time to come.

This format was amazing and brought the story to life!
The complex relationship dynamic, the layers of story mixed with the power of the atmospheric audio has made this an outstanding piece of work!

The personal record of a trip to the far outreach of the world as we know it sounded like it would be good- so far from it. I struggled through the 1st and 2nd chapters and went ahead hoping for a pick up to the story - there wasn’t one . The last chapter came as no surprise. What a waste of time. Had this not been included in my Audible package, I would be needing my money back.

So much potential and honestly disappointing

the start was good,
a great setting and a well cast production and beginning to what turned out to be a drawn out disappointment, the conclusion and ending was a let down and the hours of therapy tapes you have to sit and listen to are frustrating and don't lead anywhere.
All the best moments are so brief you can't quite believe at the end they were the highlights and there wasn't something better, some of the audio was unbearable and hard to listen to. I enjoyed it in some parts and it was gripping in the first half but it's plot was weak at best. Not worth the time if you want decent action. Such a cool setting but it was a let down. It could have been 3 hours shorter.

This book took my breath away. An audiobook that has the perfect sound effects and is beautifully narrated. It's so dark and messed up and yet it's so beautiful.

This was a fun 10 hours horror story about group of unstable people in Artic base. I couldn't stop listening to it.

not without faults but thoroughly enjoyable and scary entertainment. wish I could discuss the ending with somebody.

The Sound at the End is a Sigh.

This medium lends well to mystery stories, a bit like the campfire tales that are often included . They are usually mercifully short.

This is a Found Footage type story, done entirely with audio. The audio part is done well with plenty of sound effects and tape distortions. "Headphones are recommended" -- there are occasional places where you won't be able to hear what's going on without them. The actors do a fine job.

Cast of characters:
Trieste Grayling: Main character. Talks to Anna the whole time on the tapes.
Anna: Trieste's diving partner who couldn't come to the arctic.
Mal: An invasive therapist who publicly leaves out tapes of private sessions. About half the audio is these tapes.
Sweetie: engineer, Mal's husband.
Thorsteinn: Repair person. Ten seconds into talking with him, Trieste starts ignoring him to tell her own stories.
Avelina: base manager.
Grace, an underwater welder
Judd: Cook. My favorite actor / character in the audiobook.

The first narration in the book, Trieste is talking to Anna, telling her about a caterpillar that she saved by throwing it into a pond. Then we meet Mal, who starts a tour of the arctic base. After one minute of showing Trieste around, Mal needs to sneak outside alone to get a cigarette. Trieste sees a polar bear outside and gets warned to never go outside alone.

Later, Judd is telling a scary story - with amusing badness. But before he gets to the point of his story, he's interrupted. When Thorsteinn starts to talk about himself, Trieste suddenly decides to ignore him. These sorts of interruptions happen over and over and over again, usually just as things are getting interesting. The interruption is usually boring.

I held out to the end, hoping the story would redeem, but ...
Unfortunately, when it came to the tapes, I ...
There is a shipwreck involved, under the station, which ...
Thorsteinn has an interesting point of view, where ...

If you like lots and lots of unfinished sentences, this is the audiobook for you.

Honestly not sure what the plot was

Honestly not sure what the plot was. Was this about people with mental problems that volunteered to go to the end of the earth.... was it about same sex relationship's struggles being cast out to air their ghost.... maybe it was me but this book seemed to be all over the place. No real plot, just a butch of sadness with no beginning, middle, or end.

If you enjoy listening to books whilst falling asleep like I do, I have a friendly warning. DO NOT listen to the last 3 chapters trying to do so. The end of this book had my heart beating out of my chest with full on terror & excitement. I had so much anxiety that sleep was no longer an option.

What a fantastic listen this was! I finished in about a day because I simply could not stop listening. This immersive tale drags you deep below the icy depths of the Arctic and does not let go. Colorful characters with wonderful development and fully fleshed out backstory’s. Magnificent storytelling & narration with this full cast really brought this story to life!

If you’re looking for an intense, thrill seeking, non stop roller coaster ride, this definitely is that.

I absolutely loved this story. The audio format was amazing for the storyline and the production was absolutely stellar. The story was a found footage style exploration of the secrets and feelings of the characters we meet at this arctic research base at the ends of the earth. It’s not your standard mystery or psychological thriller — it has far more of a horror or weird fiction flavor to it, particularly themes of isolation horror and elements of weird fiction that reminded me of Caitlín R Kiernan. Not every element of the story here is totally linear or thoroughly explained, and that was pretty perfect for an exploration of these haunted characters. I recommend you listen with headphones, and definitely not in a car or any environment with ambient noise that will interfere with your experience.

There were a lot of sound effects, not necessarily a bad thing. Some of the things about the characters you'll figure out pretty quick. The end just made me wish I hadn't hung in there.

Initially this immersive audio drama had all the hallmarks of a rich and satisfying mystery! Unfortunately the "disappearing characters" device wasn't substantiated with adequate backstory. The erratic tape sounds and distortions were more of a distraction than an effective replacement for a fully developed plot with character revelations. I didn't find the ending at all frightening--just tragic and inconclusive. Especially disturbing was Thorsteinn's exit, slipped over with a few strands of hair and a red "paint-like substance" in Trieste's hand? While every character had potential depths, the plot did nothing but string them along, to the point where I didn't really care what happened to anyone. I was left with dozens of unanswered questions about a group of sad, mentally ill loners seeking the ultimate silence.

The performance was amazing, including he the actors and sound effects, and the story itself was captivating. Definitely worth a listen!

the actors are excellent, perfectly suited to their character. the sound selects add to the ambience of the scene.

I loved it! This is my first time listening to an audio book like this one. Nicely put together. Good story line, and it kept me intrigued the whole time! The different actors made it a lot of fun, too!