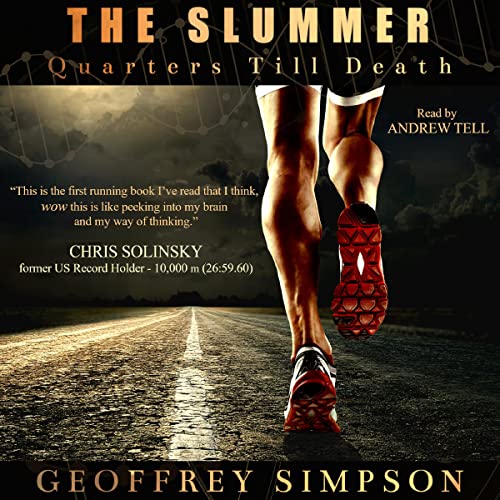 The Slummer: Quarters Till Death

By: Geoffrey Simpson
Narrated by: Andrew Tell
Try for £0.00

An impoverished runner, from an era of prolific genetic engineering, chases his dream of the 5,000-meter national title.

"This is the first running book I've read that I think, wow this is like peeking into my brain and my way of thinking. I will be reading it again and again." (Chris Solinsky, former American record holder—10,000 m (26:59.60))

In 2083, Benjamin Brandt is among the millions of “slummers” who are relegated to poverty and struggle on the outskirts of society. As a minority growing up in the gritty underbelly of Cleveland’s Industrial Valley, Ben sees the way genetically designed “elites” live only from a distance: from the shadows of public spaces people like him are forbidden to use, and on TV, where he watches the enhanced athletes compete at an extraordinary level. For years, a national track championship has inspired Ben to ferociously cultivate his own talent as a runner.

As Ben logs miles through the potholed, darkened streets of his community, an idea takes hold of him that could turn his highly stratified society upside down. He isn’t prepared to lead a revolution; however, he is prepared to run like a slummer with nothing to lose.

What listeners say about The Slummer: Quarters Till Death

A book that will stay with me for a long time. Fictional and written in the future I was drawn to tears then cheers then tears again. What gets you up in the morning?

A truly gripping and emotional book which shows the highs and lows of living in poverty in the ghetto and a young man’s dream of becoming a professional runner, when all the odds are set against him!

Have to admit, the first few minutes in to the audible version I was unsure, but soon after I became hooked! I've laughed outloud and cried. An excellent book.

Fantastic read for anyone, especially runners

inspirational and a reminder grit, determination, and passion can overcome challenge. I loved it and can't wait to try such a workout and return to competitive running.

This was a fantastic story. I am a runner, but I don’t think you need to be a runner to enjoy the story. In a sadly beautiful way it is very relevant to our times. It’s poignant and fun and inspiring. I truly enjoyed it.

For those who run or wish they did, you can not stop listening! Ready to listen to it all over again!

An amazing story. One that I we read many times. I also think one I will have my son read when he is older.

As a runner, I really enjoyed this book. I didn’t know what to expect but was surprised and encouraged.

Couldn't put it down!

I don't usually listen to fiction. This book was great! The twists and turns and overall story line was amazing! As a runner myself, it was riveting!

Awesome story with a tragic ending. I highly recommend this book to everyone, especially runners

love this story and will recommend highly to others. very motivational and heart warming