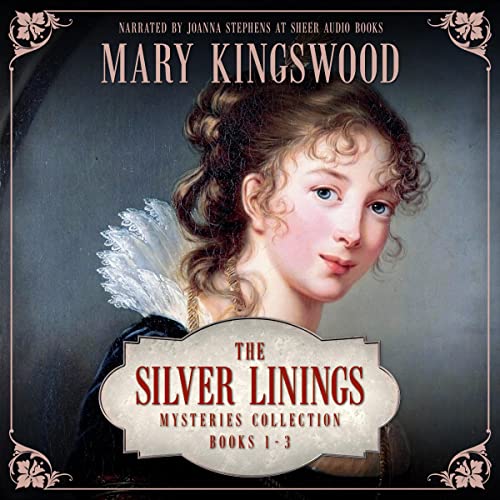 By: Mary Kingswood
Narrated by: Joanna Stephens
Try for £0.00

Hours of listening in one collection—books one to three of the Silver Linings Mysteries, a series of traditional Regency romances, set in the drawing room rather than the bedroom.

The sinking of the Brig Minerva results in many deaths, while for others, the future is suddenly brighter. But it’s not always easy to leave the past behind…

In book one, Nell Caldicott awaits the return of her violent sailor husband with trepidation, but for once her fears are not realized. Her husband’s ship, the Brig Minerva, has sunk off the Cornish coast. Nell is free, but her husband has left her with little money and many questions about his past. Gradually, as his secrets are laid bare, she realizes she didn’t know her husband at all. Can she uncover the truth? And can she ever learn to trust a man with her heart again?

In book two, Caroline Milburn and her younger sisters live in two cramped rooms, struggling to survive by their skills in lace making and weaving. When their previously unknown grandfather drowns on the Brig Minerva and bequeaths them a cottage in the country, their lives seem set to improve. But where will the daughters of a linen draper fit into rural life, now that they are better off? How will Caroline find husbands for her younger sisters? Why have purses of money been buried in the garden? And why are the neighbors so interested in them?

In book three, Annie Dresden is 26 years old, with no fortune, and nothing but a quick, practical mind to recommend her. Taken in by her apothecary uncle after her father’s death, she’s happy to be his assistant, but there’s no future for her as an apothecary. The only proper career for a woman is as a wife and mother, but for Annie, the possibility is dwindling.

When a long-forgotten suitor returns, it seems fate has given her another chance. A man turned away by her father years ago for lack of fortune is unexpectedly wealthy after his brother drowned aboard the Brig Minerva. For eight years he’s dreamed of marrying Annie, and she’s not about to throw away her last opportunity for a family of her own. He loves her, and he’s a respectable man—that’s a strong enough foundation for marriage, isn’t it?

Books one to three of the six-book series Silver Linings Mysteries. Each book is a complete story with a happy ever after ending, but listen to them all to find out all the secrets of the sinking of the Brig Minerva!

What listeners say about The Silver Linings Mysteries Collection: Books 1-3

I have read these books and enjoyed them so very much, but listening to them read by Joanna Stephens made them come alive in fresh way thank you! thank you! thank you! I am a complete fan of Joanna, her reading is excellent, so lively, never by rote. If like me you are a bit hesitant give it a go, you might get to like these audio books as much as I do.

I'm so glad I found Mary Kingswood. The story lines are interesting, not too obvious mysteries. Good, clean, sweet romances. Reader is astonishing in her range of voices. Thanks, Mary and Joanna, for hours of great entertainment!

Three excellent stories with mysteries and twist. Very enjoyable. I listened for three days to finish the stories and was regretful that they ended. Good narrator.

Stories are excellent, narration is unfortunate

Each of these stories is excellent. These are well crafted regency mysteries with well-developed characters. They are well-written and well researched but the narration is unfortunate. The narrator does differentiate between characters but they all (men, women and children) sound like elderly ladies - and every! single! sentence! is read as if it includes multiple exclamation points. It’s so overdone that it’s difficult to actually make sense of the story.