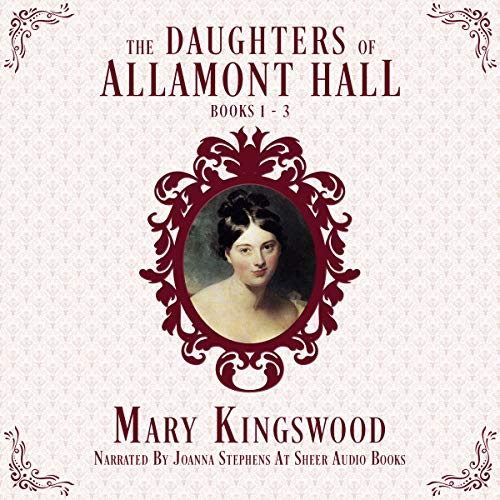 The Daughters of Allamont Hall Collection

By: Mary Kingswood
Narrated by: Joanna Stephens
Try for £0.00

Hours of listening in one collection - books 1-3 of The Daughters of Allamont Hall, a series of traditional Regency romances, drawing room rather than bedroom.

Amy is a shy, timid soul, browbeaten by her domineering father until she’s terrified to do or say anything without his approval. When he dies suddenly, his will leaves large dowries for his six daughters, but only if they marry in the proper order, the eldest first. Amy must now find herself a husband, and soon, so her younger sisters can marry in their turn. There are several possible suitors, but will any of them come up to scratch? And how will Amy choose without her father to guide her?

Belle is the plain one of the six Allamont sisters, happy with her books. With Amy betrothed, now Belle must find a husband. Reluctant to parade herself at balls and card parties, she intends to accept the offer of her cousin, James, a pragmatic but loveless choice on both sides. But fate and poetry and the gentle tendrils of friendship combine to overturn her careful plans.

Connie’s older sisters have managed to find husbands, but now it’s her turn and she’s not sure she wants to marry at all. Having only just escaped her late father’s restrictive regime, she’s reluctant to surrender her freedom to another man just yet. If only she could find one who would fall so adoringly in love that he would do anything for her.

What listeners say about The Daughters of Allamont Hall Collection

Excellent performance of a very enjoyable series. Belle and James are my favourite couple. Regency manners and morality beautifully portrayed.

Good Narration and a good old fashioned clean historical story, if you are looking for the usual historical romances around now with sex etc, then this isn't it.

If in doubt go for the Sons collection

This collection was not as good as the sons collection but still good value for one credit.

There are more books in the series, but not yet? available as audiobooks, I think I will finish the sons series but might not finish this one.

The first two books in the collection had a too similar plot.

So glad this entire series is over!

I think if the Daughters of Allamont Hall had been the first Mary Kingswood series that I had listened to, I would not have listened to any others of hers. While I really enjoyed understanding more about the Regency period, her characters, most specifically the six main characters in the series, were hard to stick with. For each character, I had to get through their "whine and pine" period before they became bearable to follow in the plot. I had to keep reminding myself that the main characters were all in their 20s and not the 12- to 16-year-olds that they acted and sounded like. I do wonder if a good part of the issue came from Joanna Stephens' choice of voices that she used with them; if I had just read the books instead, they might have been more likable.

I stuck with the books because their stories were referenced so often in the Sons of the Marquess series that I had just finished and enjoyed much more, and I was interested in the back stories that the Daughters series would provide. The first Kingswood series that I listened to, Silver Linings Mysteries, I like the best and would highly recommend it. Joanna Stephens narrates all three series, but the characters in SLM were much stronger and so the whiny, teary voices were not as distracting. I might try reading, instead of listening to, any other Kingswood books and see if that makes a difference.

I enjoyed reading the 3 stories very much and it cleared up a lot after reading the men's stories. I highly recommend reading this book.It is a clean regency story, no sex scenes to skip over.

'Loved the series! I'm addicted to Mary Kingswood's books and especially with the perfect pairing of Joanna Stephens' narration ! She is amazingly talented and voices the characters with an incredible range! I came to the "Daughters of Allamont Hall" a bit belatedly, after I had already "read" "The Sisters of Woodside" series, and THEN "The Sons of the Marquis ". Those are definitely more cohesive now that I've had the prequel/backstory to them! I'm looking forward to "reading" the additional books to complete the "Sisters " series, and any others I have missed as soon as possible! You'll be hooked once you start, too! 'Hours of extremely enjoyable entertainment that end far too quickly! Thank goodness Ms. Kingswood is a prolific writer!

Mary Kingswood is ALWAYS A DELIGHT to read or list

Mary Kingswood is always a delight to read or listen too. I love the drawing room instead of the bedroom reads!

Joanna Stephens did a very fine dramatic reading of Ms Kingswood's novels. I will immediately hunt for the next set if available.

I have read many of the books written by this author; but, this is the first time I’ve listened to an audio version of one. I have thoroughly enjoyed both versions. She is n excellent author.

Wonderful Daughters In Spite of Their Parents

I must admit that I did not enjoy this collection quite as much as the Sons of the Marquess series, but it’s probably only because I read them out of order and that series was wonderful. The stories of the first three daughters, Amy, Belle, and Connie, are in this collection. I have yet to read the stories of the remaining three daughters but plan to right away. Mary Kingswood weaves a story of girls that on the face could not help but be insipid, but they each are far from it in their own way. And this is in spite of having despicable parents. And the father’s character only gets worse as will be seen in future stories of the Sons of the Marquess. If you like Georgette Heyer, then you will enjoy both these series which, although they lack some of the humor normally found in Ms. Heyer’s stories, come pretty close to her style. And the Narrator, Joanna Stephens, does a fabulous job in all the stories.

I did not like this at all. It was so difficult to listen to that I did not finish the third book. The women in these novels are characterless little fools who do nothing to improve themselves.

This is a fantastic narrator who helps bring these easy stories to life. There is some repetition between the first three in the series regarding one sister pitted against another when it comes to whom a man is interested in or not. The mystery about where the money for the dowry's came from needs to be solved. I would definitely read more in this series. This third book about Connie is weaker and less interesting than the first two but still entertaining enough.

Amy (The Daughters of Allamont Hall #1)

I liked this book. It was in the spirit of Jane Austen.
At first, Amy was upsetting me. She was naïve and very obedient. I wanted to shake her. Fortunately, after getting to know Harriet and the truth about her father, she took on a bit of character.
At first, Mr Ambleside appeared as a great manipulator, similar to Amy's father. At the end he went to his senses, admitted that he acted badly, he apologized.

Belle (The Daughters of Allamont Hall #2)

Both characters are bookworms :D

Connie (The Daughters of Allamont Hall #3)


Overall, the writing is so well done.
I really liked the narrator's interpretation. Each person had their own voice, so they could be distinguished in the crowd.