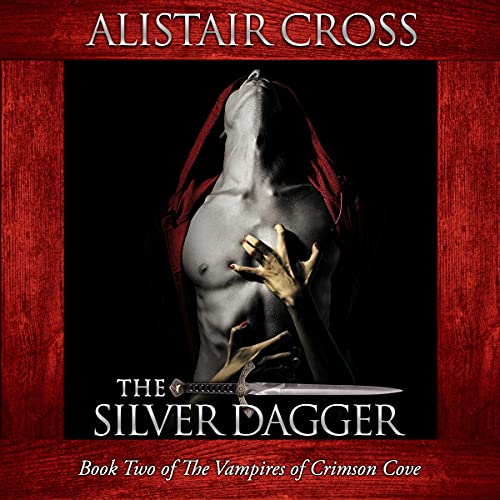 By: Alistair Cross
Narrated by: Jamison Walker
Try for £0.00

Life in Crimson Cove has been good to the Colter Brothers since Gretchen VanTreese was staked and her horde of vampires scattered. Brooks is once again human, and Cade, the rare Sire Gretchen had determined to take as her mate, is in love. Then, the unthinkable happens: Gretchen rises from the grave, and the brothers are torn apart, their lives - and the peace between them - shattered.

A trail of blood

When Cade comes into possession of an ancient ceremonial dagger, he awakens a power so deadly it defies comprehension. Meanwhile, a serial killer is stalking the little mountain town, leaving a trail of blood that leads to a truth Sheriff Ethan Hunter doesn’t want to face. And unknown to either of them, Gretchen is preparing to reopen her notorious nightclub, The Crimson Corset, and building an army to destroy her enemies and reclaim Cade Colter as her own.

A new breed of evil

The streets are no longer safe, nor are the forested paths, for a new and unknowable evil has come to Crimson Cove, and everyone - vampire and human alike - must come together in order to survive.

What listeners say about The Silver Dagger

So glad I heard book 1 The Crimson Corset first, book 2 picked right up and the ride gets going fast. If your a vampire book fan it's the one you need to hear or read. It pretty much has it all it's defiantly worth the credit!

Alistair Cross's Silver Dagger is brilliant! BRAVO! This seductive story had me seduced from the beginning to end. As I listened to the narrator weave in and out of each scene with a hypnotizing voice, it was like I was there, watching the character's every move. Looking forward to The Black Wasp.
--Author of the Breedline Novels

I've never really been drawn to vampire stories.(You can blame the Twilight saga for that.) This story, however, ranks up there in my top 2 favorites alongside True Blood.

I’m a fan of Alistair Cross but I’m not a fan of this book. I felt like there were too many different side stories and I had a hard time keeping up. It’s possible that if I had started with book 1, then this book may have made more since. I’m also not a fan of the over-usage of the puns and catch phrases, some of which are quite funny, it’s just a bit much IMO. This book is also very long, and it seems like this book could have been broke down into smaller stories. This is all just my opinion and like I said, I’ve really enjoyed other books by this author but this one didn’t work for me.
I’m also a fan of Jamison Walker who has the ultimate creepy voice which is perfect for horror genres. IMO the narration was good but with so many characters, I sometimes had difficulty distinguishing some of the voices. Overall, if you love vampires, I recommend trying book 1 first. If you enjoy it then you may enjoy this book as well.