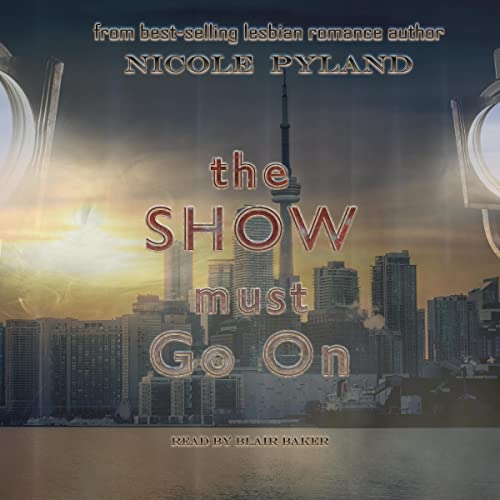 The Show Must Go On

By: Nicole Pyland
Narrated by: Blair Baker
Try for £0.00

Baker Eagan has just wrapped the TV show she created and ran for the past five years of her life. She’s ready for a break and to refocus on her writing, and the last thing she wants to do is go to her agent’s birthday party. Little does she know that her agent plans to play matchmaker.

Casey Jinx is the lead actress on a hit TV show. She’s also out and proud and happy to be playing a lesbian character on network TV. When she goes to a birthday party for her agent’s wife, she’s almost immediately introduced to Baker. Within minutes, Casey finds herself completely taken with the somewhat shy writer.

The two women hit it off instantly and discover they want more than just a chat at a birthday party. Unfortunately for them, though, Baker was just offered the job of executive producer on Casey’s show, making Baker Eagan her new boss.

Their romance begins quickly and intensely, but once Baker takes the job, their relationship is left behind. Will they find a way to get back what they’ve lost? Or will they let the show get between something they’ve both felt so strongly about? After all, the show must go on.

What listeners say about The Show Must Go On

I read this book before listing to the audio and WOW! First off, Blair Baker was stellar! I actually felt like I was listening to a movie, not just someone reading a book. That alone makes this audiobook amazing. Then it's a Nicole Pyland story and she definitely didn’t disappoint. Baker and Casey are endearing characters. They both have their own flaws but are perfect for each other. You couldn’t help but root for them throughout the story. This is a fun lighthearted listen/read that you won’t regret!!

Oh, wow. This is the second audiobook now that I have listened to from this author, and I have been very pleased with both. Her writing is excellent, her characters are enjoyable, and this book, in particular, has dialogue and relationship dynamics that read as very real. Her books are also super sexy and very aware of modern gay culture (which I’ve found is disappointingly not the case with a lot of lesbian writers). On top of that, this narrator was really, really good. I’ll definitely be listening to this one again.

Give it a chance

Baker and Casey are great characters that you can’t help but root for their relationship to succeed. They have an instant connection. They have several obstacles that they have to get through. Working together is tricky as well as Casey’s quick reactions to things before hearing the full story. The characters are so real that I expect to see their show on TV. I loved the narrator Blair Baker. She did a great job with the story and giving each character the perfect voice. I like hear from different narrators.

I could listen to this narrator all day

I loved this audiobook. The writing and the performance were so clear: both emotionally and literally. I found myself completely pulled into the world of the Baker and Case. I left feeling like I actually knew these characters in real life. I will now be searching for other books that Blair Baker has narrated just because I’m so moved by this actor’s performance.

This was my first audiobook and I was blown away! The narration was fantastic! How you would usually play out in your mind how a sentence would sound, she did it! The tone of her voice from character to character, even though slight at its, made for a fantastic listen. And the writing, well what can you really say about the writing? Fantastic! Awesome! The adventure she laid out for Baker and Case made me want more! I couldn’t stop listening, sometimes I had to because adult stuff got in the way, but I wanted to know what would happen next! And the ending, many will say is lack luster, but I felt it was perfect for the story of Baker and Case. Thank you so much for this beautiful story and the beautiful narration!! Now I need another hit of my new addiction!!!

Although the storyline was a little different, it was pretty boring. However what I liked about this novel was the lack of drawn out tension. Sometimes the tension level in most cliché lesfic novels is way too much. This book didn’t really have much tension which was refreshing.
The back and forth of miscommunication that goes on for 60-70% of the average romance novel is ridiculous. If it takes that long to express mutual feelings then it’s hard to see how the relationship could be successful. This was a refreshing aspect of the storyline…there wasn’t a drawn out misunderstanding. They both loved each other but the disconnect was obvious and understood.
Because of these things I didn’t hate it. The ending was really good, but all in all, it was just “meh” for me. Maybe if there was more passion and sex it would have spiced it up, but it lacked that as well.

As for the narrator, I liked her voice but there wasn’t much of a difference between how each character spoke. Sometimes I didn’t know if it was Baker talking or Casey. But again, I really liked her voice and it’s natural flow. Had there been more sex scenes, I have no doubt that she would have made it incredibly enjoyable. A nice change from Lori Prince who sounds like a squeaky toy in the sac and like everything is a joke. Lori seems to be the choice narrator for lesbian romance audiobooks, which is a huge bummer because I just can’t stand anything about her voice. I haven’t heard this narrator before and it was a pleasant surprise aside from the lack of variation between the characters. I usually can’t hang with that, but for some reason it wasn’t a deal breaker for me.

I loved this story so much! The Blair Baker may be my new favorite narrator!

I am not into TV and celebrities novels, but this hone was recommended on Jae reader’s FB page and I decided to listen to it. I loved it. The MC were very well created, the story line is interesting and engaging.
Narration was wonderful

Nicole Pyland is a guilty pleasure author. Any book she releases is a must buy for me and the Show Must Go On just enforces that sentiment.

The main characters, Baker and Casey, have great chemistry and you can’t help but root for them. It’s astounding it takes them so long to finally fully get on the same page but the journey there was a fun bumpy ride.

If you enjoy a book that is witty, humorous, full of romance and engaging than this one is for you.

Another Book With Realistic Women

I knew going into this one that I was going to be swept off of my feet but it still caught me off guard. Having read two other books by Nicole Pyland with a combined rating of 4.5 I just knew what to expect. I knew that I was going to get real characters that felt like they would be my friends compared to just two women on some pages. The Show Must Go On was all of that and more.

I liked the dynamic that was at play here, not because of the boss and employee, but the different things that they had to deal with because they were together but not out together. The raw feelings that Casey had when things changed up in her life were so realistic and the way that Baker felt when it happened... just perfect.

The Show Must Go On had me smiling from ear to ear but also had me biting my nails to make sure that these two amazing women ended up together. Pyland had me enthralled from the opening and I just wanted to know what was going to happen next for these two.

I really enjoyed the narration by Blair Baker as well, they are slightly more unfamiliar to me in this genre, but I thought they knocked it out of the park!

Honestly, my only complaint about this book is that the cover is sort of hard to read. I think the background and the lights work great, but I think the text is just a bit hard to read. That's honestly the only thing I would change. I know it's Toronto, but I might try and make it slightly brighter just so that Toronto (which does play a pretty big part in the story) stand out a little more. Maybe I'm biased :)