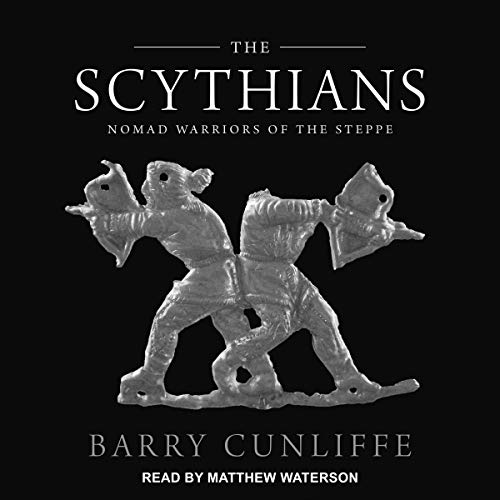 By: Barry Cunliffe
Narrated by: Matthew Waterson
Try for £0.00

The Scythians were nomadic horsemen who ranged wide across the grasslands of the Asian steppe from the Altai mountains in the east to the Great Hungarian Plain in the first millennium BC. Their steppe homeland bordered on a number of sedentary states to the south and there were, inevitably, numerous interactions between the nomads and their neighbours. The Scythians fought the Persians on a number of occasions, in one battle killing their king and on another occasion driving the invading army of Darius the Great from the steppe.

Relations with the Greeks around the shores of the Black Sea were rather different - both communities benefiting from trading with each other. It is from the writings of Greeks like the historian Herodotus that we learn of Scythian life: their beliefs, their burial practices, their love of fighting, and their ambivalent attitudes to gender. It is a world that is also brilliantly illuminated by the rich material culture recovered from Scythian burials, where all the organic material is amazingly well preserved.

Barry Cunliffe here marshals this vast array of evidence - both archaeological and textual - in a masterful reconstruction of the lost world of the Scythians, allowing them to emerge in all their considerable vigor and splendor for the first time in over two millennia.

What listeners say about The Scythians

Wonderful book - What a waste..

A book as valuable and significant as this one deserved a maximum effort for the audio-book.
Instead, it appears that a semi-literate actor was hired, who, though he has acquired an actorly diction and accent, has not managed to acquire either an education, or even the ability to look up the phonetics of words with which he is not familiar.
All of this begging the question as to why this was not read by Cunliffe himself?
The quality and worth of the work outweighs the poor delivery, but this book deserved a five-star performance.

Well researched but narrator is terrible

The author clearly has done extensive research but didn’t bother to tie it all together. The work is very disjointed. Having listened to the whole book, I still don’t know who the Scythians were as a people and what motivated them.
The narrator has no idea how to pronounce words. Every word that is Greek or Roman is mispronounced. He clearly doesn’t know that the “D” in Dneiper is silent.

This book is great, it's hard at times to focus on the regions being described since I have a cursory knowledge of central Asia to begin with. But it is a fascinating look at a culture that is widely cited in ancient history texts yet mostly forgotten about today. My biggest problem is just how short the book is, I want it to keep going! I want a 20 hour tome about the Scythians. Having said that the narrator does read a little fast, I had to slow the speed down to 70% for my feeble brain to catch up but even with that the book wasn't as long as I wish it was. If you like history about the ancient world then you'll love this book.

If you're just learning about the Scythians or need sources for research, this is a fine book. If you're already familiar with the culture, it's just repetition- a condensed version of information readily available. I got a refund.

Great narration. Wonderful descriptions. So much info I listened to it twice. Love ancient history.

than something written for the well educated lay person. However, once past the endless lists of who excavated what, and when,
the author links interesting quotations from ancient sources about the Scythians with corroborating physical evidence.

The narrator also uses some odd pronunciations that I haven't heard before, and I don't think it's just the British accent.

If you don't need this for research purposes, or a handy soporific, you may want to pass on this one.

Done with passion. The research put into this project was done with such meticulous enthusiasm that it should be in front of the reference section on this subject.

a must listen for ancient history enjoyers

pair this book up with the the greater courses lectures about people of the step. it's titled, the barbarian empires of the steppe.
by professor Kenneth W. Harl

this book gives more in-depth and fascinating cultural insight into the scythians, than you get from the lectures. though at the very end of the book the description of the artifacts is a little odd for audiobook. still every enjoyable .

honestly I struggled to get through this audiobook. the author's writing is very dry, and seems to focus more on the cultures around the scythians than the scythians themselves. that said, I found the second half to be very informative, once the author began actually talking about the scythian lifestyle and possible beliefs

The discussion of archeology was interesting, but it then seemed to devolve into a regurgitation of Herodotus.