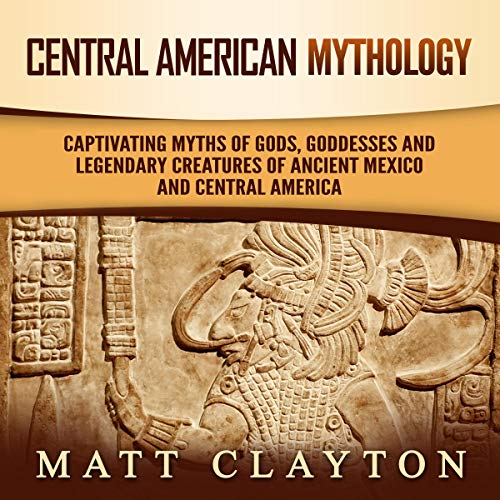 By: Matt Clayton
Narrated by: Randy Whitlow
Try for £0.00

If you're looking for a captivating collection of Central American myths, then pay attention.... Mexico and the Central American states are home to many indigenous peoples, each of whom speaks their own language and lives according to their own customs.

These diverse peoples have rich storytelling cultures, passing down myths about gods and the work of creation, and about the humans who for good or ill interact with these otherworldly beings. The loving god Olocupinele creates the world of the Cuna of Panama, while the goddess Nakawe’ destroys and then remakes the world of the Huichol of Mexico.

In the story “Mother Scorpion Country”, from the Miskito of Nicaragua, we learn that even the goddess of the land of the dead cannot break the bond of love between a husband and wife.

The stories presented in this volume are but a small sample of the abundant variety of myths and legends from Mexico and Central America.

Central American Mythology: Captivating Myths of Gods, Goddesses, and Legendary Creatures of Ancient Mexico and Central America invites you to go on a startling journey and discover the following myths:

So if you want a captivating collection of Central American myths, click the “Buy” button!

I visited Central America many years ago and did not much about it then. This audiobook was fascinating, but still a lot of opinion about life there and not much about actual finds.

Factual and Easy to understand.

I admired the mythology included in this audible, but I prefer it was so much longer, indeed recommended.

It is a quick and easy read.

This is a delicate addition to any stock or solely a pleasant listening for the inquiring.

Each of the involved stories was distinct to me. Explained in a sinless and simple to understand method. The issue is involved with each, which I obtain amazingly!

This audible is short, only 1 hr and 16 mins, I wanted it more. The knowledge was excellent, and considering I can perceive what I want in the least amount of fuzz, recommended.

An audiobook quick to understand with amusing stories, it is an excellent preference. Similarly, that occurred in my country; the pastor started Central American Mythology with the makeup of native stories

This book provides a sample of various myths

The tales are communicated precisely and concisely. Because they are not from a single taste, there is absolutely no overarching meaning to make everything collectively. Nevertheless, per personal story is interesting in its own right.

I have to say that the Mythology of Central American makes you think quite a bit. I found it very enlightening.

Wonderful insight into the civilizations of Ancient Mexico and Central America that prospered in the continent.

Single Star for t his effort.

I believe I was arranging a book on the myths of these civilizations, but instead, I got child stories of Ancient Mexico and Central America.

Why is a white mans voice teaching me about latin America?

I’m literally just a few minutes in and I can’t help but wonder why a man with an obvious North American southern accent is trying to educate me on a culture that does not appear to be his. I don’t know many people of Central American ancestry who sound like they are from Texas, USA. I’m mixed race and have been looking high and low to find stories about Central America ( half of my culture is from there) and I finally found one and it’s being narrated by someone who obviously ( that’s the key part) does not seem Latin. I’m not saying he should have a Spanish accent and no offense to the person himself but it feels a bit pragmatic to be reeducating myself by the voice of a man who does not represent that culture at all.
This book should be narrated by a neutral voice only because every minute I’m trying to learn from this book I just keep getting reminded that it was most likely written without the full context of the history and tradition behind it being truly introduced, described and felt. Because the author prolly wasn’t indigenous, or has been fully immersed in the culture the stories came from. I especially feel that way because they chose that narrator.

A fun listen.. a few really enchanting stories! I wished there was more it ended too soon! And the man reading has a good story telling voice. My only problem is I wish it had more stories! I was bummed it was over!

I found this audible well written easy to follow retained my close observation through fascinated by info regarding the Mythology.

Makes you want to learn more.

Succinct yet informative and not just a conventional academic transference of facts but a well-written history with a flash of what indeed discovers our diverse humanity so compelling!

An exciting introduction to Ancient Mexico and Central America . could have focused a little more on architecture, which I love the most.

A short history of The American Mythology

An enjoyable 1 hr and 16 mins listening for anyone interested in Ancient Mexico and Central America.

I found it lacking in-depth and written in a style that was more academic than narrative — still good work by the author.

I had read and also listened to some books on the subject before coming across this audible. I recommend listening to this generalized record of Central American Mythology before progressing to more detailed studies, recommended.

I wonder if we will ever have a complete registry of ancient Mexico and Central America. I infrequently run role-playing games and prefer it was probable to experience these people better.