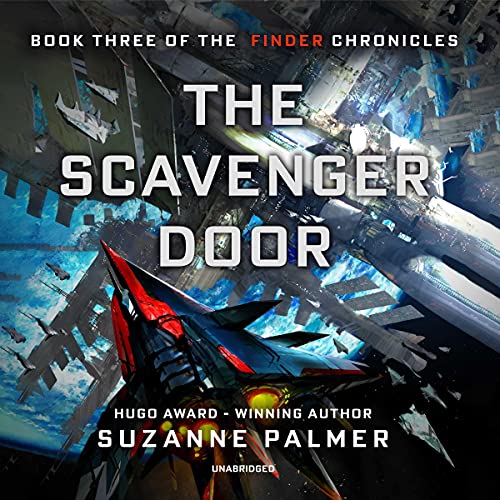 By: Suzanne Palmer
Narrated by: Paul Woodson
Try for £0.00

Fergus is back on Earth at last, trying to figure out how to live a normal life. However, it seems the universe has other plans for him. When his cousin sends him off to help out a friend, Fergus accidently stumbles across a piece of an ancient alien artifact that some very powerful people seem to think means the entire solar system is in danger. And since he’s the one who found it, they’re certain it’s also his problem to deal with.

With the help of his newfound sister, friends both old and new, and some enemies, too, Fergus needs to find the rest of the artifact and destroy the pieces before anyone can reassemble the original and open a multidimensional door between Earth and a vast, implacable, alien swarm. Problem is, the pieces could be anywhere on Earth, and he’s not the only one out searching.

What listeners say about The Scavenger Door

A different end to the series

Better then the last book and very different from the first. More of an Indiana Jones adventure then the hard science fiction of the first book in the series. But very enjoyable. The ending felt rushed and I hope this isn't the last time we get to hear from these characters.

All in all the story is engaging and fun however you can feel the lockdown and culture war in this latest entry. The author is talented enough to where her little additions didn't detract from the plot. But they were there, little sprinklings of white guilt, gun control, "Christian" hategroups, and most bizarre a traditional Mongolian tribesmen using they them pronouns as though that would be a thing in a 25th century after people had real problems to deal with. Also I don't think any one in the 25th century would harp so much on climate change it should just be an unremarkable part of their reality. The plot is still great the main characters are compelling. I just think the author needs to spend time with normal people again, not let the divide get to her so much.

You can skip this one

I enjoyed the first two books in this series, particularly the audible, graphic novel version with the full cast. His narrator is fine, I was just spoiled by hearing the other one, who has a rich, Scottish accent, first. However, the story on this one is not great. It’s incredibly slow for the large part of the book And ends on a cliffhanger. It’s now been over a year since this was published, and I can’t find any clue as to a potential fourth book, so this may be a whole series that ends on a cliffhanger. I don’t know, it was kind of dull. Definitely would recommend the first two books though.

Such a good book!

Loved getting to hear more of Fergus' story. The story was fantastic and I liked getting to know more of the characters. Sometimes it was difficult to know who was talking because there wasn't a difference in voice from the narrator.

I pray there is another chapter in this series! OMG WHAT AN AMAZING STORY!!!!

Well, maybe not a complete dumpster fire, but in comparison with the two other ones this is really weak and boring! It’s woke Sci-Fi with very little SciFi! A real disappointment and the end was ridiculous! If there is another book, not sure I will spend money on it! I rather listen to the first two books again.

An absolutely amazing story, but start with the first book

The series has become one of my absolute favorites. It has deep character development. Interesting villains, and truly laugh out loud moments.
One of the things I appreciate about the Finder series is that it runs the full gambit from humor to suspense while creating a fascinating cast of characters. The protagonist Fergus Ferguson is kind of like a MacGyver with an attitude problem and a complicated history.
My one piece of advice is start off with the first book because it helps you get a clearer picture and the rest of the series will make more sense.

Love these books! Fantastic writing, so glad the author avoided the clichés and did a really wonderful character development.

She’s a good writer but had to get insultingly political.

I enjoyed the story but was stunned by two things. The first was just laughable. She has no idea what Fajitas are. The second was a slap at Christians that had nothing to do with the plot. There are so many highly educated Christians who are political moderates. There is no reason to express such uninformed bigotry towards Christians. If you decide to read this book, you will recognize it when you read it. Can we not read a book without being slapped by bigoted politics ??

I need more! loved it and I want more adventures with Ferguson on Audible!

Unknown potentially lethal creatures? Not certain there will be breathable atmosphere? I'm taking my exo-suit off because I do not want to ruin it.