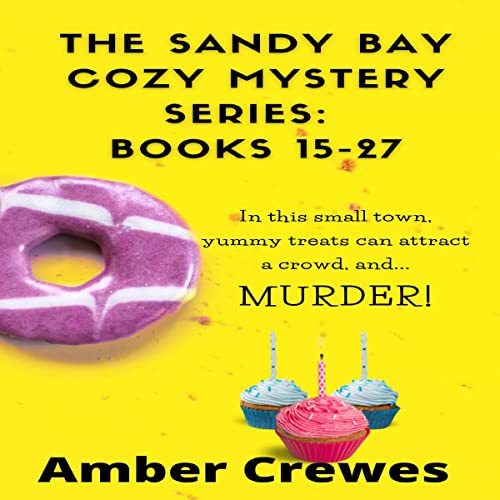 By: Amber Crewes
Narrated by: Elena Marino
Try for £0.00

The books in this boxset include:

Orange Mousse and a Fatal Truce

A murdered scorned wife. A prime suspect losing their mind literally and figuratively. A small town bakery owner whose generosity links her to the deceased and accused.

Queen Tarts and a Christmas Nightmare

Two murdered business associates. One family under the scrutiny of a conservative town. A bride-to-be in need of some comfort and joy.

A murdered celebrity impersonator. A cast of unusual suspects. A bride-to-be on the verge of a nervous breakdown.

Slaughter of the Wedding Cake

A murdered celebrity baker. A wedding plan gone horribly wrong. A frustrated bride-to-be who just wants to say, "I do."

A murdered chef on a cruise. A terrible bug spreading among passengers on the ship. A new bride whose dream honeymoon is turning into a nightmare.

A murdered restaurant owner. A small town suspicious of a big tech firm's advances. A newlywed baker drowning under the waves of change around her.

A murdered politician. A small town torn between the past and the future. A newlywed baker who can't help poking her nose in a murder mystery that seems off.

Lies... they can get you out of a jam...and also murdered.

A murdered aristocrat. A popular family with dark secrets. A frustrated baker identified as the prime suspect.

Yummy Pies and Someone Dies

A tragic hospital murder. A bevy of unusual suspects. A pregnant bakery owner caught in the middle.

Twas the Fright Before Christmas

Christmas should be the most wonderful time of the year. But Meghan's seems to be filled with surprises that include betrayal, accusations...and a DEAD BODY!

They say all endings are inevitable...this one comes with MURDER!

No cliff-hangers, swearing, or graphic scenes!

Meghan literally walked or runs right into people!!! And she is not even texting, just thinking. Do people really DO that??

Fun stories, but so juvenile. Recommend stories for kids, not adults.

Absolutely wonderful collection of cozy mysteries to delight everyone. Definitely came alive for me with the Narrator’s help.

Wish I could get my credit back

The story is not well developed. There are gaps that I would have preferred to be explained. The narrator is melodramatic throughout the reading which I found distracting to the fragile storyline. This would have been better for me in paperback I won’t be able to listen to the other books in this series.

The Sandy Bay Cozy Mystery Series: Books 15--27 by Amber Crewes. I love this series and Meghan and Jack are wonderful characters along with all of the supporting characters. I really like how Amber Crewes has written these cozy mysteries with humour and a murder mystery while growing Meghan and Jack's relationship. Each of the 13 books is a full novella and the set has over 50 hours of listening, what a great bargain! Elena Marino gives an excellent performance in the narration. If you love cozy mysteries, Amber Crewes is terrific.