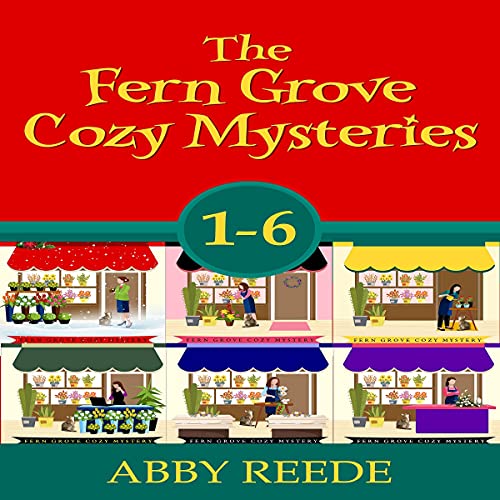 By: Abby Reede
Narrated by: Elena Marino
Try for £0.00

A murdered unpopular business owner. A small town with busybodies and open secrets. Can a new girl in town start a new life before a murder investigation ends it?

Tracy Adams had three things going for her in her just-above-average boring life, namely:

When she lost her job and had to move back to the small town where she grew up, it seemed like her life had lost all purpose. Helping out at her aunt's floundering floral shop seemed like the perfect distraction before she decided what to do next.

When her aunt's competition, a nasty and egotistical know-it-all is found dead, the rumor mill in Fern Grove goes into overdrive. With an important piece of evidence linking Tracy to the scene of the crime, she becomes a person of interest in the murder investigation. This leaves her feeling vulnerable and confused.

Moving back to Fern Grove was meant to be the start of a new life, but this murder mystery is fast ending what has hardly begun. Will she retain her wits and piece together the clues that will lead her to the killer?

One Daisy and Two Crazy Funerals

Two families mourning. Two mysterious murders. One innocent florist whose floral arrangements are the common denominator at the scene of the crimes.

When Tracy's floral store is commissioned to supply the arrangements for two funerals, she's humbled to be entrusted with the responsibility. She reluctantly puts up with the rude behavior of an old lady who manages the affairs of one of the deceased, a well-known philanthropist in Fern Grove.

When this old lady dies at the funeral, no one suspects foul play. After all, she was old and frail. However, the subsequent murder of another close member of the family, sets alarm bells ringing.

Could both deaths be linked?

Tracy is left bewildered and enraged when handsome detective Copeland suggests that her daisy arrangement was the one piece of evidence found at both murder locations. The stakes are further raised when the fortune of the deceased is revealed. It seems almost everyone associated with the dead aristocrat is a person of interest.

Is there a killer at large disposing of anyone associated with the deceased? Can peace be restored to one of the oldest families in Fern Grove? Will Tracy ask the right questions to expose the murderer or become the killer's next victim?

If you want to enjoy a lighthearted listen with an amateur female sleuth and six gripping murder mysteries with a touch of romance, then you'll love Tracy Adams and all the friendly and not-so-friendly characters in Fern Grove.

This recording is a mess

The first short story here wasn’t too bad but after that the stilted language and lack of editing of the recording showed up. The reader seemed to do the best she could given the language in the story. But no one edited the recording. Aside from odd stops and starts, one whole chapter was a series of outtakes from other stories, starting with the ending of a story that hadn’t even played yet. I tried to return the book at that point, but I guess I had listened to too much to return it. I recommend taking this book off of the Audible website before others borrow it Perhaps it can be fixed? Audible recording is usually high in quality. I can’t imagine what it would do to the Audible reputation if someone borrowed this book before others.

The stories are light and fun but who ever did the editing should b fired. There were some messy parts for sure!

Poor writing, continuity, and production. The last chapter of one book was switch with the 2nd to last of another. During one point in a book there is no reading, but you can hear paper shuffled, and chairs moved. In the first two books the aunt has children (living out if state), but from the third book on she is childless. The main character is just silly. Who hugs their bank manager? Ok, maybe if I got a loan with 0.0001% interest, but on the street after meeting them for the third time? No.

I have listened to the first 2 and they were pretty good but at the end of the second story it jumped to the end of the third story where the main character is telling who committed the 3rd murder in the 3rd story and there is all this background sounds , someone walking and the reader is clearing her throat and repeating what she just said. I am really disappointed.

Editing is not worth paying for

I wonder if any editing is done for the recording. There are several pauses, you'll hear the narrator flipping the pages of the script and starting the reading again from the previous sentence. This recoding is not done with the quality that Audible usually has.

I like how the story is developing, and I'd like to know what happens next, but I just can't take any more of this narration. It's like 8th-grade over-acting class. And if the author doesn't know the difference between the definition of "subjective" and "objective," well there isn't a lot of hope for 5 more books. I'll take my credit back and try again.

The Fern Grove Mystery Series Books 1-6 is outstanding. Abby Reede writes wonderful cozy mysteries with characters that I felt like family. Elena Marino’s narration is an amazing performance. I have read all of the books in the series and listening to the audio was joyous. I remembered when Tracy came to work with Aunt Rose, when Tiffany was hired, and when Tracy met Warren and their romance began. This is a wonderful collection of stories and I am looking forward to listening to the audio if Abby Reede’s next Books.