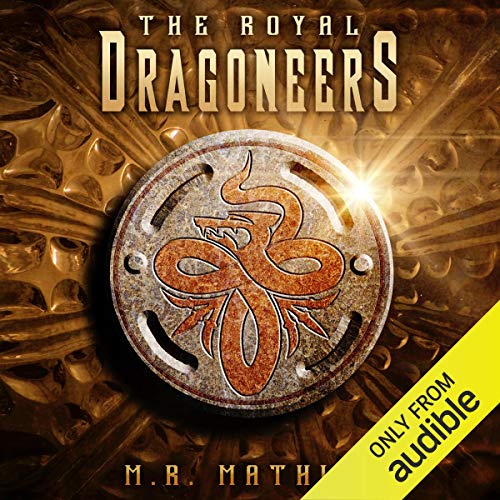 After struggling for more than two centuries to tame the inhospitable islands where they washed up, the descendants of the survivors of a lost passenger ship are now striving to tame a more substantial "Mainland" they have found.

For as long as mankind has been stranded, dragons have been their sworn enemies.

Sixteen year-old Jenka De Swasso wants nothing more than to follow in his father's footsteps and become a King's Ranger. But when he one day finds himself surrounded by vicious trolls, a young pure-blood dragon comes to his rescue and they become bond-mates.

Meanwhile, the goblins have a new king, Gravelbone, and have allied themselves with the tainted "mudged" dragons to drive mankind out of its lands. Setting his sights on a vast manmade wall, Gravelbone and his wicked hell-born Nightshade, seek to poison the entire human kingdom and enslave any survivors.

Jenka and his companion, a druida warrior named Zah, soon realize that they and their bonded dragons are mankind's only hope for survival. Forced to defy their arrogant king's wishes, the pair set out on a desperate quest to stop Gravelbone's forces and save mankind from its terrifying fate.

With action so intense you'll forget to breathe and intrigue around every corner, The Royal Dragoneers is one adventure you cannot miss.

Hold on to your dragon... your journey is about to begin!

What listeners say about The Royal Dragoneers

The idea of the book was good but the narration, the childlike character and non engageing story put me off, I had to force myself to finish the story.

Yes, I enjoyed the story very much.

I found the narrator's reading style annoying to listen to. She read in strange surge-like phrases that were distracting. I was almost like a computer was reading to me.

The story was great

The story was an outstanding read. The narrator has a good voice but used pauses and inflections that were irritating. We managed to ignore the voice inflections and pauses and just listened to the words

The story is great. I have really come to enjoy this author. But I will not listen to another book read by this narrator. She narrates as if reading to preschoolers. She pauses in all the wrong places and doesn't provide a good range of voices. She slurs words a lot. Other than that I would recommend this book and author to any fantasy lover. I will be finishing the series but I'll be reading it instead of listening.

Siri would have been a better reader

The narrator was completely horrible.

She would randomly pause at words without any apparent rhythm. The only time she was less horrible was when she got tired. An example would be as follows, note the periods and read the sentences as such "The grey. scaled dragon was tired and was barely able to raise. Its wings to defend itself." Note this is not a quote from the book.

Did The Royal Dragoneers inspire you to do anything?

get my own dragon?

What made the experience of listening to The Royal Dragoneers the most enjoyable?

The story was great. A village boy and some others turn into dragon riders to save a land from a troll who is trying to poison them.

What was one of the most memorable moments of The Royal Dragoneers?

When the young dragon Jade gets chastised and then takes off on his own. I was scared for that juvenile wyrm, more than I'd like to admit.

Have you listened to any of Christine Padovan’s other performances before? How does this one compare?

I heard her read Mathias' Crimson and Clover on youtube.

Absolutely. Each chapter ends in a way that compels you to keep going.

This is the second M. R. Mathias audio book I have listened to. In both the narrators use voices for the characters. This is okay but distracting at times. It also lends to the drama and anticipation at times too. Mathias' stories are somehow traditional fantasy yet told in a very refreshing way. I hope all four of his fantasy series make it to audio format.

What made the experience of listening to The Royal Dragoneers the most enjoyable?

The characters were very likable.

I liked the relationship between the variety of characters. Everyone from the lowly village boys to the portly king.

I started reading on my kindle then switched to the audio version. I wish i hadnt . The narrator detracted from the book so badly that if I had started with the audio version I would not have continued with novel.

No. Its a good book but the narration is just to annoying.

reader is frustrating to listen to

Would you try another book from M. R. Mathias and/or Christine Padovan?

another book with different narrator

I have no idea if the book is any good. The narrator is so bad that I stopped listening in less than 5 minutes. Her lack of emotion and slow speech made me think she had just learned to read or was trying to read while not showing she was on pot. Or perhaps she was just trying to sound like a make, which would explain the low slow voice, which doesn't sound real.

can't wait to hear the next one. Good book.

Would you try another book from M. R. Mathias and/or Christine Padovan?

I'm trying to enjoy the story itself, I believe it may be a good story but the narrator makes it difficult to stay into the story. I may need to stop listening to it and download the written version in order to get through it.

The narrator places emphases and inflextion in all the wrong places in the sentances. Althogh the narrator is capable of creating different characters, her sub-par reading makes it difficult staying in the story.