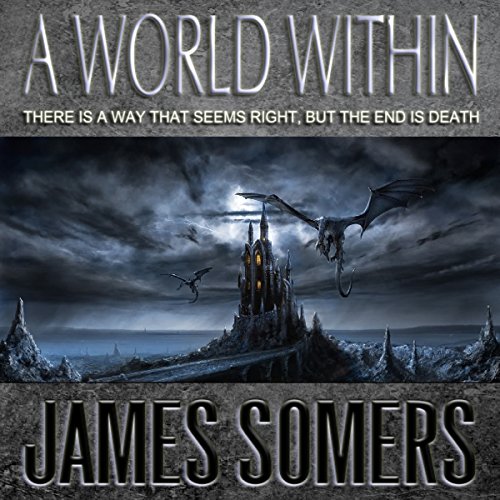 Fourteen year-old Daniel Harwick's powerless days bullied at Ekhart Academy are about to end. Traumatically catapulted into a beautiful but terrifying world within, Daniel finds himself on the run from Pirates, Dragons, Shapeshifters, Spider-Elves, Griffins, Krakens, Cyborgs and even "Death" himself. Reluctantly, Daniel joins with a strange band of ragtag warriors questing for the legendary Wielder who alone can defeat the spread of the Necrom Void across the Living Land. But as Daniel begins to exhibit a strange ability to escape overwhelming danger his friends wonder if the Wielder may be the least one they expect!

What listeners say about A World Within

It is a great book for all ages, proving that a book doesn't need graphic sex or vulgarity to be good! It is a fast read, one that would be perfect for younger readers/teens with the right amount of fantasy and imagination without getting dragged out. A young boy, who is used to being the one picked on, is knocked unconscious by bullies, in his dreams he finds he has "powers" beyond the normal and is thrown into a new world where he is important to those around him. These dream friends accept him, respect him and encourage him.

High adventure in a fascinating world

Dragons, giant intelligent cats, cyborgs, and more, with humans threading their way through a world filled with mythic hazards. Daniel, snatched from his role as a bright, but bullied, schoolboy and thrust into a magical world where all the rules have changed must adapt or die. Brilliantly performed by Will M Watt, with voices for all of the characters and a flawless sense of timing. Exciting start to an epic series

What did you love best about A World Within?

The over all story. I cant wait for the next one!!!

I received this book for free in exchange for an honest review.

If you could sum up A World Within in three words, what would they be?

Daniel - from one adventure to the next, Daniel never had a boring day! Always something to do, having a purpose.

What does Will M. Watt bring to the story that you wouldn’t experience if you just read the book?

Interesting story that would be great for YA readers, specially the boys!

Cliff hanger. I'm too old for this book. But shouldn't a children's book at least have a recognizable plot arch? This one rambled. Then I got to the end. Wait, no I didn't, because it doesn't have one.

cyborgs, talking animals, pirates, multiple dimensions, ultimate evil, mean school kids, mash it together. I was not thrilled with this book, too many types of characters and too much stuff so that you did not have the opportunity to get engaged with any one. The reader does a fine job with what he had to work with but I found myself getting frustrated with all sorts of different themes. I would listen to Will Watt again, I will not listen to the next book though.

The story:
The plot follows a path that is common in other portal fantasy type novels, wherein a rich kid gets knocked out and wakes up in a fantasy world with a wise cracking animal hybrid side kick, a beautiful warrior princess, dragons, and so on. In this regard, it's a very by the numbers portal fantasy. The concept of 'the wielder' was however pretty unique, and for that bit of creativity I would say well done.

The writing:
The writing was fine, and I noticed no repetitive sentences, nor did I ever feel like I was completely lost due to the structure. Overall, good writing.

The narration:
I feel conflicted here, but overall the narrator is clearly a skilled professional. The story is narrated in a "story teller" type voice, in that it sounds like the narrator is sitting next to you holding the book and reading it to you, as opposed to really doing a performance, as most other modern audiobooks are like. As a consequence, most of the characters sound the same or similar, but this again only adds to the 'story teller' charm. I personally prefer a more performance style book, but I felt that the story teller style did not in any way take away from the listening experience.

Technical issues/editing:
The only problem I noticed, and it is jarring and recurrent, is that there is literally less than half a second pause between the last sentence of a chapter ending, and then the next chapter heading beginning. It sounds almost like: "He looked up in the clouds and smiled chapter three they were walking into the forest when...". I thought this should have been adjusted so that there is a more natural break between chapters.

Conclusion:
It's a solid portal fantasy with decent narration.