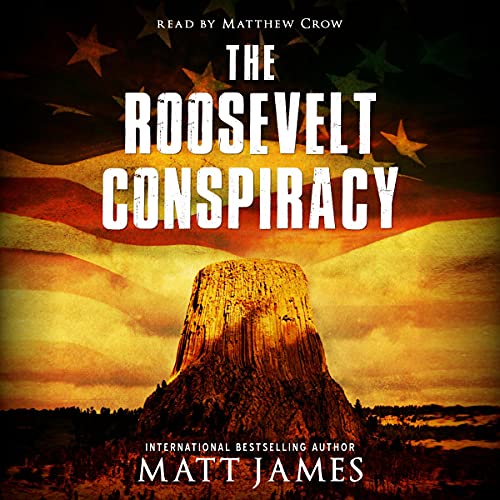 By: Matt James
Narrated by: Matthew Crow
Try for £0.00

Twenty miles east of Devils Tower, in the sleepy town of Cascade, Wyoming, a cryptic letter is found. It mentions a "wealth of a nation", and reads as nothing more than fanciful fiction, except that its author was one of the most influential men in American history, famed explorer and former President of the United States, Theodore Roosevelt. The letter also references the Seven Sisters of Native American folklore.

The correlation between the two subjects is unknown, even to Chatan, the message’s discoverer, a young man with Lakota ancestry. Unsure of who to trust, he contacts his uncle, Yellowstone Park ranger Tatanka “Bull” Durham. Suspecting trouble, Bull asks his friend and trusted coworker, former Delta operator Jack Reilly, to come along.S eeing it as a way to square up a dangerous debt, shady casino owner Bartholomew Creed swiftly takes matters into his own hands. The potential dollar amounts involved are too great not to act. But is it enough to kill for

What listeners say about The Roosevelt Conspiracy

If you enjoyed the last book then this will definitely hit the mark again. An ancient wonder to discover, villians out to get it, and Jack is the only one who can stand in their way. A nice little surprise at the end, so I look forward to listening to the next book in the series.

An engrossing search for an historical site.

This story drew me in from the beginning and kept me there throughout the book. I didn't want to turn it off. Plenty of bad guys tried to take the letter leading to the treasure. So there were car chases, reckless jumps off mountains and ruthless thugs shadowing the heroes. So, great suspense interwoven around a plausible historical treasure story. The narrator did an excellent job of building the tension while the story held my interest. Highly recommended.

I do enjoy listening to Matthew Crow, He brings out the characters, action, the humour, the pulls them all together.

I read and listened to the first book in this series and I was not disappointed with the second book. I have seen the mixed reviews and gland , I still took this book out.

I loved the mix of characters and history . We have corruption , family, history and action. All brought together for a treasure hunt, that goes back hundreds of years.

Jack, Bull and Hawk are a great time. I am looking forward to the next book . Loved the humour , Jack talking in his head, Bulls silent responses and Hawks modern ways.

This is not a heavy book, but it has action , and the right pace.

A great addition to the genre. So looking forward to the next in line in a series with such much potential.

Part 2 of the Jack Reilly series

Part 2 of this "archeological thriller" series. A fun read/listen. Personally, I found this to be far from a sophomore slump, and in fact a much better written story that flowed much smoother than the first book.

Here we see Jack in his everyday environment of Park Ranger. His interplay with his best friend "Bull" Durham rings very real. Bull's nephew and his girlfriend stumble over a letter written by Theodore Roosevelt. This leads to corrupt cops, murderous bodyguards, local crime bosses and teams of killers sent by big time syndicate types. Oh, and we also run across an ancient temple hidden for thousands of years.

All in all the book was a lot of fun. The book also ends on a note that sets up future adventures, pre-justifying further wild adventures by this character. I recommend this book for any lovers of adventure.

I loved The Roosevelt Conspiracy! It enveloped me in from the first words spoken and, after completing it, I mourn that there aren't anymore words left to say. Full of action and is a wonderful storyline. Matthew Crow has kept it flowing beautifully. I can't point to a single moment that lagged. A great job for both! Now I have to go find the others because this one was just too good to only read one!

Former Delta operator and now a park ranger, finding a note, which hints of hidden wealth. Was it from President Roosevelt.
The history of the parks with the first national monument The Devil Tower in Wyoming. Found it to be interesting and with good narration. Given audio for my voluntary review

Great Book for a twist on history.

This book was a fantastic listen and had some fun historical information.

I looked up the Devils Tower on the Internet and it is remarkable.

The characters are very well developed and the action is believable.

Matthew Crow brings this book to life with his narration and the dry humor makes me laugh out loud!

I was voluntarily provided this review copy audiobook at no charge by the author, narrator, Audible, and/or publisher.

I voluntarily left this review.