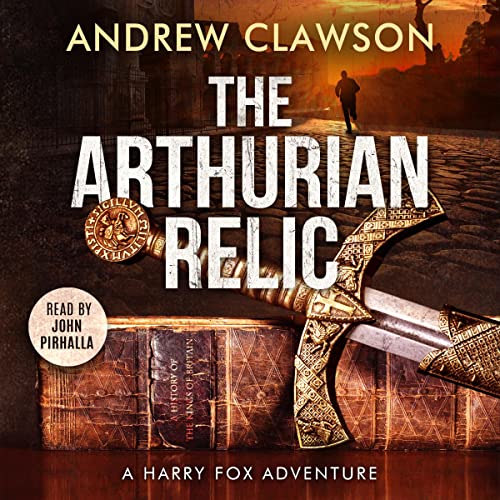 By: Andrew Clawson
Narrated by: John Pirhalla
Try for £0.00

A mythical king. A long-lost manuscript. A relic worth killing for.

Harry Fox hunts artifacts for the Italian mob. When a forgotten manuscript suggests Great Britain's most famous king may not be fiction, Harry plunges headlong on a dangerous path to uncover the truth. Little does he know a shadowy alliance with ties to three of mankind's most powerful organizations follows his every move, desperate to stop him before he can uncover the truth behind the legend.

Surrounded by enemies and able to trust no one, Harry barrels across the globe and discovers the myth of King Arthur is far more real than anyone ever imagined. Can Harry survive to reveal the true story of this legendary man, or will the ancient forces chasing him add his name to their long list of victims?

What listeners say about The Arthurian Relic

A rip-roaring read that hits all the quintessential marks of great historical thrillers: action, suspense, mystery, great protagonists and antagonists, and of course, history. Andrew Clawson has an uncanny ability to suck a reader in through character and then propel that character on a rollercoaster adventure. With a piece of history purportedly tied to King Arthur, a group that has been protecting a secret for 2000 years, and multiple parties after the same thing, Harry Fox is squarely in the middle. And the stakes are high. If you’re a fan of Indiana Jones or Dan Brown, do yourself a favor and read Andrew Clawson.

It is compairable to Indiana Jones. We really liked it , can't wait to listen to the next book in the series.