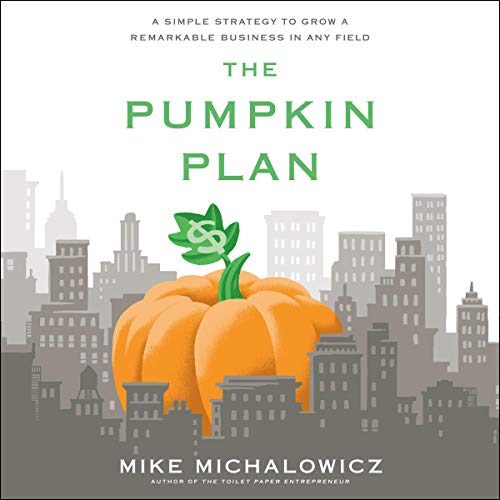 Each year, Americans start one million new businesses, nearly 80 percent of which fail within the first five years. Under such pressure to stay alive - let alone grow - it’s easy for entrepreneurs to get caught up in a never-ending cycle of "sell it - do it, sell it - do it" that leaves them exhausted, frustrated, and unable to get ahead no matter how hard they try.

This is the exact situation Mike Michalowicz found himself in when he was trying to grow his first company. Although it was making steady money, there was never very much left over, and he was chasing customers left and right, putting in 28-hour days, eight days a week. The punishing grind never let up. His company was alive but stunted, and he was barely breathing. That’s when he discovered an unlikely source of inspiration - pumpkin farmers.

After reading an article about a local farmer who had dedicated his life to growing giant pumpkins, Michalowicz realized the same process could apply to growing a business. He tested the Pumpkin Plan on his own company and transformed it into a remarkable, multimillion-dollar industry leader. First he did it for himself. Then for others. And now you. So what is the Pumpkin Plan?

Full of stories of other successful entrepreneurs, The Pumpkin Plan guides you through unconven­tional strategies to help you build a truly profitable blue-ribbon company that is the best in its field.

Includes exclusive author commentary throughout the audiobook and a bonus author interview at the end of the program.

"Every page, every chapter, as I read this book, I asked myself, ‘Michael E. Gerber, how come YOU didn’t think of that?’ Just remarkable! Just absolutely a remarkable book. A pumpkin! Who would have thought? Every one of you - entrepreneurs, business owners - read it! Do it now!" (Michael Gerber, author of The E-Myth and creator of the E-Myth Evolution)

"Another great read from Mike Michalowicz! Mike’s off-the-cuff sense of humor and business savvy ensure that The Pumpkin Plan is a book that entrepreneurs should read for years to come." (Guy Kawasaki, author of Enchantment and The Art of the Start)

"Hard-hitting advice aimed directly at the entrepreneur who is stuck being a wandering generality instead of a meaningful specific. Plenty of seeds worth planting." (Seth Godin, author of We Are All Weird)

What listeners say about The Pumpkin Plan

Binge worthy. Listened in one day. Loved it . Highly recommended for any industry sector

The advice in this book has given me without doubt the biggest lightbulb moment I have ever had.
All of the evidence was there and I just needed someone to point it out... and Mike did!
What followed was a total change in direction of a large part of my business.
More sales, increased profit, busier factory AND less hassle.
I can't recommend this book highly enough and I really hope it has the same impact on you as it had for me.

One of the best books I have read so far enjoyed it. Always learning new stuff.

The author distilled what you cannot be taught in business school into this short book The Pumpkin plan.

Every Entrepreneur should read it!

Mike Motorbike !!! Is the most entertaining and passionate reader I've heard in the longest while !! I still have 2 hours of listening left and honestly, time flies when you're having fun. Mike is brilliant to listen to. I will most definitely be investing in his other books. His funny little anecdotes make me chuckle OUT LOUD !
Great book. I shall be following his advice and implementing them into my business, glad I found you Mike XD

I found the book very helpful with many good practical advices.
I liked the way the author talks and reads the book.

Got a lot of important elements and concepts

Very good. Principles of business, organisation and focusing on best products and services. Educating you to remove needless costs and focus on your best most profitable clients . Thumbs up

Mike's my favorite author by a long mile. if you listen to this book you'll understand why, he's down to earth, awesome and so relatable. I constantly find myself nodding in agreement at the dumb stuff I've done in business

I have 89 books in my library now and this is excellent, has a lot of the nitty gritty actual things you can do to grow your business unlike a lot of business books that are more philosophical or mindset orientated

I’d put this book in the top 5 books I’ve read. That doesn’t mean much because I’ve probably only actually read like 10 books in my life.

But, his voice reading his book makes it feel like he’s in the room telling me a story. Kept me engaged most of the time, I usually listen while I drive and sometimes I zone out. I’ve already used some of the tips and tricks in the book.

I wish I would’ve found this book ten years ago! I recently cut some vines before reading this book because I felt like my attention was so divided between this side hustle or that start up idea. It was making it to where I didn’t have time or focus for any of them. I scaled it back to 2 things in the same industry. I figure that at least aligns, but of course I want to eventually scale what I’m doing..I’ve been researching what to outsource to which company, best hires, who to hire first, how to combo jobs, etc. Basically I want to know all the steps to scale before I get in too deep and drown myself(did that before). I’m so glad I found this book because it literally breaks it down step by step and it’s replicable. This side of entrepreneurship fascinated me and it turns out, this is all it should be. He tells you everything to focus on and when. I know I will go back and read random bits of this book for years to come depending on where I’m at in the process. Thanks Mike! You’re a real one. 😃👍🏻

Game changer, the steps in this book are actionable and effective. I did the work of applying them and it works. Highly recommend this book.

I loved this book. It was very engaging and presented valuable insight. I will recommend it to all entrepreneurs I encounter and will use all its advice in my own business.

It gives you a detailed plan on how to grow your business, the exact same method is what I have used in my company to grow my employees, but this is just a new way to implement the same ideal, now with my customers.

Loved it. Can’t wait to fire some clients. Here we go. Great job on the narration too.

Mike comes up with new concepts that are revolutionary! Can’t wait to implement them in my business!

Grow with the Clients you want!

Great process for narrowing down to the customers/clients that you want to grow your business.

Recommended for business owners who feel stretched in too many directions.