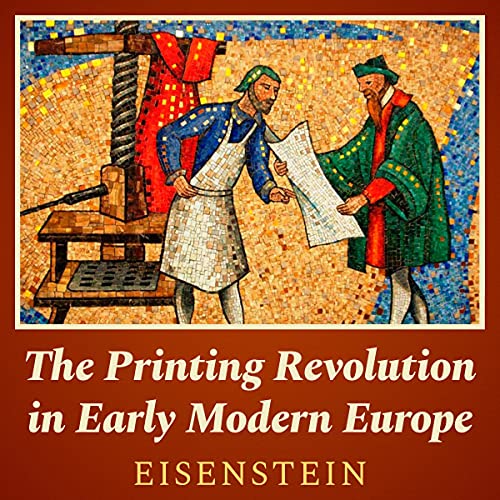 By: Elizabeth L. Eisenstein
Narrated by: Jonathan Cox
Try for £0.00

In 1979, Elizabeth Eisenstein provided the first full-scale treatment of the 15th-century printing revolution in the West in her monumental two-volume work, The Printing Press as an Agent of Change. This abridged edition, after summarizing the initial changes introduced by the establishment of printing shops, goes on to discuss how printing challenged traditional institutions and affected three major cultural movements: the Renaissance, the Reformation, and the rise of modern science. Also included is a later essay which aims to demonstrate that the cumulative processes created by printing are likely to persist despite the recent development of new communications technologies.

What listeners say about The Printing Revolution in Early Modern Europe

I was really hoping this would be like a Simon Winchester book, where one came away with a much deeper understanding & appreciation of the subject matter. But it's a dud IMO. After listening to the first 5 or 6 dry chapters of basically rambling about peripheral issues & jumping around the timeline with no apparent storyline navigation. What is largely absent is the physical or technical aspects of the printing process itself - the press, paper, ink, breakthroughs, false paths, how these breakthroughs were solved by whom & why... I then reverted to listening to the first 5 minutes of forward chapters just to see if things improve. Nope.