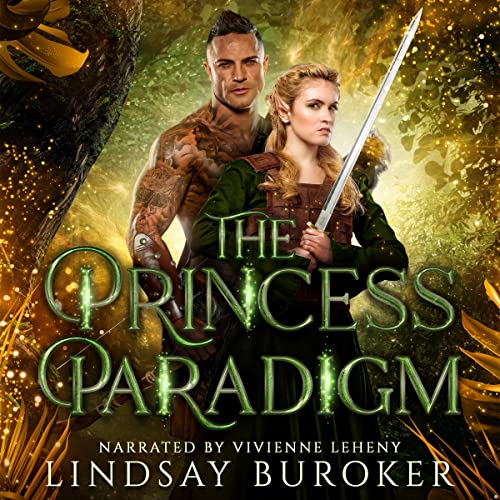 By: Lindsay Buroker
Narrated by: Vivienne Leheny
Try for £0.00

Elven princesses aren’t supposed to fall for brutish human warriors, especially not warriors from an empire of ferocious conquerers.

But when the tattooed Colonel Mrothgar stalks into the elven court, claiming to be there on a diplomatic mission, Princess Hysithea has to learn more about him.

Not because he’s handsome and his smile makes her insides melt. As a princess, it’s her duty to protect her people, and she needs to find out if the colonel is a threat to them.

But what if the answer is yes? And what if her heart leads her astray?

She can’t protect her people if she falls in love with the man who wants to conquer them.

What listeners say about The Princess Paradigm

Thoroughly enjoyable addition to this entertaining series. As ever, Buroker doesn't disappoint - with a strong well-depicted world, lots of action and a sympathetic heroine whose impulsive behaviour is understandable. Love the greedy, bad-tempered war horse:).

I want to say big thank you to both author and narator - I enjoy your imagination and work with voices as both are very well combined. The story takes us on a road to Dreamlands where our imagination can run free, but also where we could meet personality types we come across in our daily lives. It makes you smile, think and even tear could drop but the most you want and need to listen to the end. Thank you

heroine is a little annoying

Performance is great, and the storyline is interesting.
But the heroine acts rashly repeatedly and keeps making stupid decisions.

I love these characters

I'm so in love with these characters and this world. Since Elf tangent I have been waiting for the next book and I loved this one even more. I hope this series continues because I would hate for these characters to go to waste.

Another Amazing Addition to my Buroker Addiction

I absolutely loved the addition of this storyline from the Elf Tangent world. I am crossing my fingers for another. The characters, humor, and story line are all amazing I love the addition of Hawk to the story for any fans of Buroker you know you always look out for people, places, and things you may have read before. It is always such a delight to read.

Looking for resolutions the hard way

Hawk’s sister is the main character in ‘The Princess Paradigm’. With a background she is desperately trying to overcome, the princess decides to find peace for her people. As usual with Lindsay Buroker’s books, there is action, sass and romance. It was an enjoyable book to read during this time of year.

Looking forward to more stories in this universe. But on to the new series. Lindsay Thank you you as always for a great story.

This was a worthwhile read. I did feel that it lacked the overall pizazz is usually present in Lindsay’s books. However it was a good read.

What can I say

To start with, 5 stars are not enough. This book takes place in the Elf Tangent universe with the lead characters from that book making a strong supporting role. The two new main have their own journey to work through. The character and story development that I have come to expect from Lindsay Buroker was true to form and kept me entertained throughout the story. I can not imagine any other person than Vivienne Leheny providing the narration, she was outstanding as always. I hope there are more books in this universe from LB because it is an entertaining place. Thank you both for what you give us.

The Buroker/Leheny combination is always worth a few hours of my time. I originally thought this was just a separate novel not realizing it was a sequel to the elf tangent story. To be honest, I didn’t enjoy this one as much is the original story. I just kept feeling like the heroine was making some unbelievable stupid decisions. Of course if she hadn’t made those choices there would not have been a story. Plus, from the beginning she seemed to be a victim of her hormones and allowed the hero to wheedle information out of her because of it. It left me feeling slightly impatient. But otherwise it was typical Buroker fare and I always enjoy those.