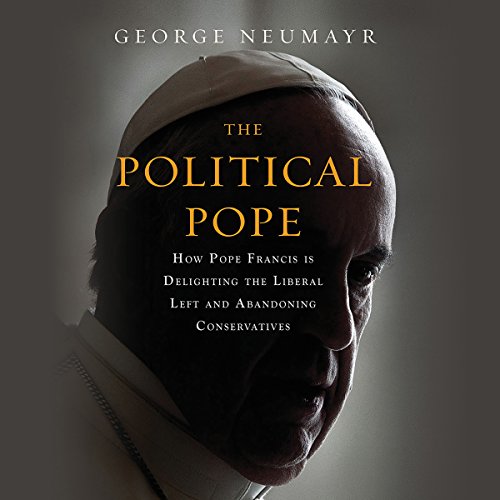 By: George Neumayr
Narrated by: Holden Still
Try for £0.00

The untold story of the Left's efforts to politicize the Vatican and the battle to stop it - before the Catholic Church as we know it is destroyed.

Pope Francis is the most liberal pope in the history of the Catholic Church. He is not only championing the causes of the global Left but also undermining centuries-old Catholic teaching and practice. In the words of the late radical Tom Hayden, his election was "more miraculous, if you will, than the rise of Barack Obama in 2008".

But to Catholics in the pews, his pontificate is a source of alienation. It is a pontificate, at times, beyond parody: Francis is the first pope to approve of adultery, flirt with proposals to bless gay marriages and cohabitation, tell atheists not to convert, tell Catholics to not breed "like rabbits", praise the Koran, support a secularized Europe, and celebrate Martin Luther.

At a time of widespread moral relativism, Pope Francis is not defending the church's teachings but diluting them. At a time of Christian persecution, he is not strengthening Catholic identity but weakening it. Where other popes sought to save souls, he prefers to "save the planet" and play politics, from habitual capitalism bashing to his support for open borders and pacifism.

In The Political Pope, George Neumayr gives listeners what the media won't: a bracing look at the liberal revolution that Pope Francis is advancing in the church. To the radical academic Cornel West, "Pope Francis is a gift from heaven". To many conservative Catholics, he is the worst pope in centuries.

What listeners say about The Political Pope

I would recommend this audiobook to a friend.

Read at a good pace.

What does Holden Still bring to the story that you wouldn’t experience if you had only read the book?

The pace gathered together the information in my mind.

Nice that the author had the courage to reveal the insidious goings on within the current pontificate.

Confirmed my observations of Pope Francis and my parish priest who
Is uber liberal and preaches social justice which is code for Liberation Theology. I am leaving the Catholic Church until it returns to the gospel teaching and not socialism/communism.

My thoughts Havel been verified to my dismay! I️ would have loved to have been wrong.

I never write reviews but made an exception for this book. While the author has a right to his opinion, I couldn't disagree more with his conclusions. The Catholic Church needs to be changed and Pope Francis has the courage and wisdom to lead the way. I finally feel like I belong in the Catholic Church. I think I'll stay.

So much of what I was beginning to suspect and fear as a faithful Catholic is clearly affirmed and more by this author. He gives facts based on this Pope’s own words, teachings and acts that are very very troubling to say the least. It appears that all the hard work and accomplishments for evangelization, the preservation of the Holy Faith and Church under St. John Pau II and Benedict are being undermined. God help us!

I would recommend this book to anybody who sees and knows exactly what this pope is doing to the church of god it also let you know that it is people like this pope and not the church who is bringing down the word of God and using it for his own Evil agenda. The book is very inspiring very knowledgeable and very well written great author.

Great book!! But many mispronunciations

The book itself was great. The narrators voice was pleasant but many words were mispronounced.

Great outlook on a touchy subject

I lived it. I love this Pope and I'm not catholic. Great history for me and insight.