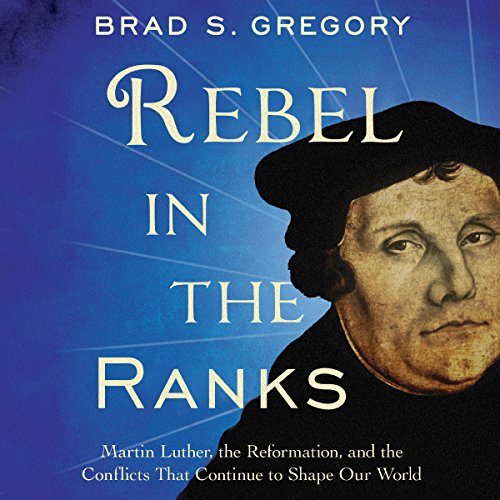 Rebel in the Ranks

By: Brad S. Gregory
Narrated by: Sean Runnette
Try for £0.00

On the 500th anniversary of the Reformation comes this compelling, illuminating, and expansive religious history that examines the complicated and unintended legacies of Martin Luther and the epochal movement that continues to shape the world today.

For five centuries Martin Luther has been lionized as an outspoken and fearless icon of change who ended the Middle Ages and heralded the beginning of the modern world. In Rebel in the Ranks, Brad Gregory, renowned professor of European history at Notre Dame, recasts this long-accepted portrait. Luther did not intend to start a revolution that would divide the Catholic Church and forever change Western civilization. Yet his actions would profoundly shape our world in ways he could never have imagined.

Gregory analyzes Luther's inadvertent role in starting the Reformation and the epochal changes that followed. He reveals how Luther's insistence on the Bible as the sole authority for Christian truth led to conflicting interpretations of its meaning - and to the rise of competing churches, political conflicts, and social upheavals. Ultimately, he contends, some of the major historical and cultural developments that arose in its wake - including the Enlightenment, individual self-determination and moral relativism, and a religious freedom that protects one's right to worship or even to reject religion - would have appalled Luther: a reluctant revolutionary, a rebel in the ranks, whose goal was to make society more Christian, yet instead set the world on fire.

What listeners say about Rebel in the Ranks

Something to think about

The overall thesis of this book was interesting...how the unresolved problems of the 16th Century Reformation have influenced and informed 21st Century America. While I may not agree with all of the author's conclusions, the questions he poses are important. The only criticism I have on the performance is that the voice actor needs to do better research on how to properly pronounce proper names. E.g. Melanchthon and Bonhoeffer. His continued slaughtering of these names was annoying.

This book should be earth shaking. The last section on Secularization should stir us to think more how to take our faith to all parts of our social, political and economic spheres. This, along with other books on the foundations in Secular theory, should and hopefully will be material for a prophetic movement that critiques the modern captivity of the Church and brings forth a new model of faith in the three veins of Christianity that is thoroughly political, social and economic without giving way to the divisiveness and war mongering power struggles of the previous era in the Reformation.

outstanding. simple, yet erudite discussion of the all-pervasive influence of Luther and the Reformation thru six centuries of Western experience.

Rebel in the Ranks is a field breaking book. Brad Gregory has unbelievable breadth of knowledge of the reformation period and weaves an engaging captivating story about how the reformation is still relevant today. And explains that the unintended consequences was the secularization of western society. A must read!!!!!!!

Two books in one

The book is really two books in one. The first is a history of the reformation and subsequent wars and political turmoil. The last few chapters are where the author leaves behind research and espouses his personal opninions on the present. I greatly enjoyed the first 3/4 of the book and recommend it. The last part I did not enjoy. I didn't even disagree with most of his commentary, I just don't like the ttansition from researched history to personal opinion.

The performance was very good, though.

I really appreciate Brad Gregory for taking the time to write this book on Martin Luther! He also includes a significant amount of information on other protestant reformation luminaries. Most of all though, I appreciate Brad's overarching perspective of the deleterious effects which were precipitated by the persons and events of the reformation. Additionally, he underscores the reality that we are suffering (even at this current time) from the negative impact of those fateful choices made 500 years ago.

I must add that Sean Runnette did a superb job reading the text of this audiobook!

A good book for understanding the Reformation...

I grew up within the tradition of the Lutheran church. With 2017 being the 500th anniversary of the Reformation, I wanted to get a better understanding of the tradition in which I was raised and currently worship.

There are a lot of books out there to choose from... I only wanted to read one. I wanted one that was not too academic, yet provided me with a framework and context for understanding the reformation, as well as an understanding of Martin Luther. This book seemed to hit that mark.

There were enough stories intertwined with the history to make this a relatively easy listen.