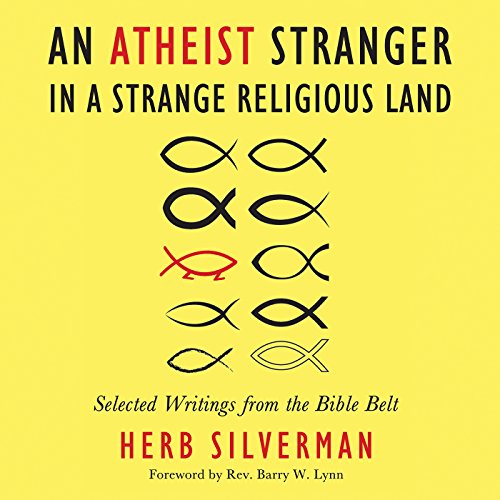 An Atheist Stranger in a Strange Religious Land: Selected Writings from the Bible Belt

From Orthodox Jewish child in postwar America to mild-mannered mathematician in academia to legendary atheist activist in the heart of today's Republican South, Herb Silverman has always been outside the mainstream of American culture, politics, and religion. From this unique vantage point, he writes about the most pressing issues of our day, including those related to war, peace, patriotism, race, gender, and church-state separation. In this entertaining and thought-provoking volume, he curates some of his best written work. Silverman may see himself as an atheist stranger in a strange religious land, but thanks in part to his work as activist and author, atheists as a whole are no longer strangers in this increasingly irreligious land.

What listeners say about An Atheist Stranger in a Strange Religious Land: Selected Writings from the Bible Belt

Loved this book, brilliantly written by Herb Silverman, he has a great sense of humor, made me laugh out loud a few times 😁🎶

I really enjoyed listening to this book, the points of view were amazing and the stories compelling . Herbs not the best speaker and his comedic timing is terrible but I still enjoyed listening to him. The other speaker was fantastic. This is a great book with some fantastic history should be read or listened to by everyone both faithful and Atheist.