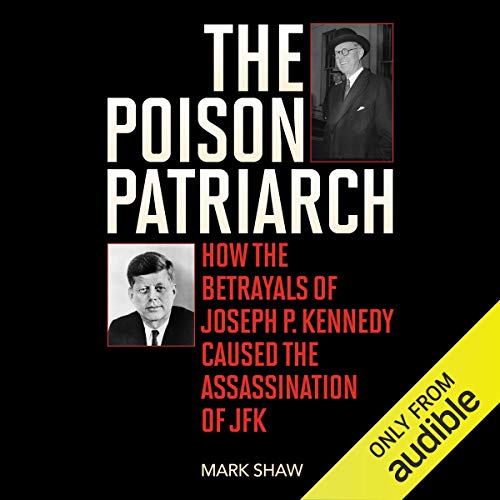 Mark Shaw adds another twist into the ongoing conspiracy theories surrounding the death of John F. Kennedy, using 40 new interviews and extensive research to implicate Kennedy's father, Joseph. Shaw's argument centers on how the elder Kennedy's mob ties - as well as those of Melvin Belli, the novice attorney of Jack Ruby, Lee Harvey Oswald's killer - led to JFK's assassination in an attempt to destroy his Robert's efforts to end organized crime. Pat Kiernan performs with a staccato rhythm that gives Shaw's information a shocking power, and his forceful presence makes these assertions commanding and provocative.

Shaw addresses these tantalizing questions: Why, shortly after his brother’s death, did a grief-stricken RFK tell a colleague, "I thought they would get one of us...I thought it would be me"? Why was Belli, an attorney with almost no defense experience (but proven ties to the Mafia), chosen as Jack Ruby’s attorney? How does Belli’s Mafia connection call into question his legal strategy, which ultimately led to the Ruby’s first-degree murder conviction and death sentence? What was Joseph Kennedy’s relationship to organized crime? And how was his insistence that JFK appoint RFK as attorney general tantamount to signing the president’s death warrant?

For 50 years, Shaw maintains, researchers investigating the president’s murder in Dallas have been looking at the wrong motives and actors. The Poison Patriarch offers a shocking reassessment - one that is sure to alter the course of future assassination debates.

What listeners say about The Poison Patriarch

A long and tedious flog

I question the relevance of the first three quarters of this story, it could have summarised in a great deal fewer words. The title is misleading as only a bit at the beginning and a bit at the end relates to Joseph Kennedy. The protracted diatribe of Jack Ruby's relationship with his lawyer should have been much shorter.
The narrator has a most annoying accent and reads the story like a shopping list.

He should stick to writing briefs

What disappointed you about The Poison Patriarch?

Would you ever listen to anything by Mark Shaw again?

Which character – as performed by Pat Kiernan – was your favorite?

What character would you cut from The Poison Patriarch?

This is a poorly edited book. An editor would have told Mr. Shaw not to use the words Logic and logically in every other sentence to support suppositions. He coins the phrase "Twin Assassinations" and then repeats it ad nauseum though no one who lived through Dallas considers Kennedy/Oswald on the same plane. One was the leader of the free world - one was a fringe loser. There is NO new information except Belli and who cares? Everyone has long supposed the mob was involved in assassinations. He's repeatedly gloats that "this author" has discovered new ground and breakthroughs. He hasn't. He does however, make a plug for his other book about Dorothy Kilgallen. I plan to ask for my money back - waste of 7 hours.

I read this book because I am a huge fan of history around the JFK assassination. However this book was a disappointment because basically Mr Shaw rehashed every thing from another of his books, word for word in many places.

One standard in writing - tell them the story early, tell them often, and make sure they knew the story at the end. This author missed that day in class. Joe Kennedy doesn’t enter the story until near the end. The book is about Jack Ruby, Jack Ruby, Jack Ruby. He covers quite a bit of history. The author just co-opted the Senior Kennedy’s name. Also the reader switched pronunciation of names throughout the book and since these are common names, it is distracting.

This author was extremely repetitive. Difficult to finish due to the content being repeated over and over. The title is extremely misleading.

As most, I’ve heard, seen, and digested the many theories and speculation associated with the JFK assassination. This book contains the most clear cut and logical explanations I have ever encountered. Loved every minute of it!

Great read on the Kennedys

Mark Shaw's book takes us to a logical conclusion. Unfortunately it has taken half a century of details and facts coming to the surface for the public to get the bigger picture.

Good story. Good theory. But, logic dictates that the "Mob" could NOT have done it without help from people much higher ranked than street cops. Also. approaching LBJ and telling him of a conspiracy is naive. To say the least.

Finally, 18 chapters of a tease, is b.s., especially since the writer simply regurgitated the same message with nothing new at the end.

Blaming Joe Kennedy for getting JFK and RFK is right. He managed to screw the pooch and got his family tree cut ✂️ down.

Some good info. And probably accurate...Not nearly enough to prove the thesis.But the author continuously uses supernatural religious overtones to basically claim all Kennedys deserved to die because their father was a gangster.

Nothing new here. Not much about Joe Kennedy except for last chapter. Same sentences in many chapters. Over and over.